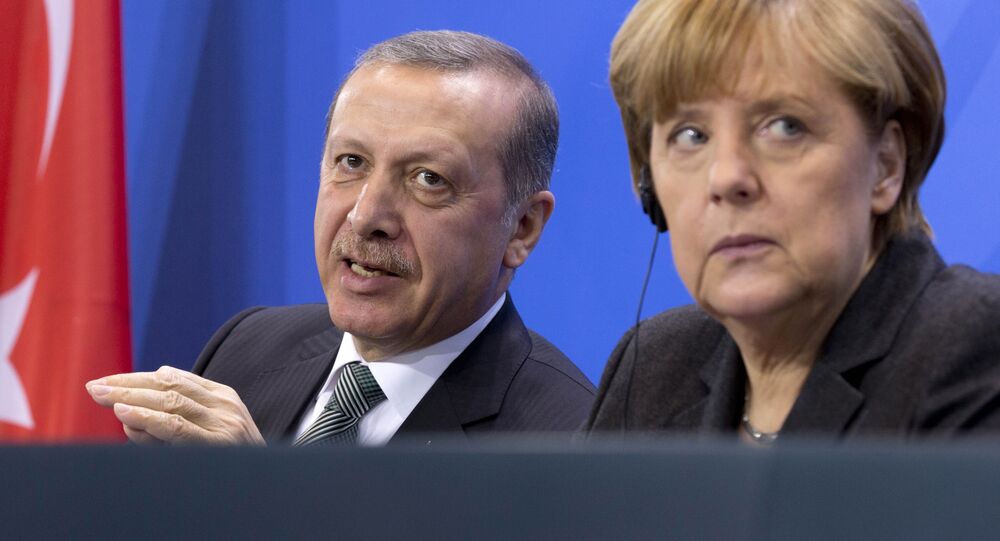 Relations between Germany and Turkey, two NATO allies that also play key roles in the refugee deal protecting Europe from a surge in migrant arrivals, have never been so tense, with experts saying that chances of improvement are slim as mutual discontent keeps mounting.

"Chancellor Angela Merkel and her entourage are fed up with Turkish leader Recep Tayyip Erdogan blackmailing Germany by threatening to walk away from the refugee deal with the EU and let hundreds of thousands of asylum seekers from the Middle East and northern Africa flee to Europe," Lenta.ru observed.

For its part, Ankara is discontent that the Berlin-led EU has backtracked on granting the Turks visa-free travel. Brussels has insisted that Turkish authorities must amend the country's anti-terrorism laws to make this happen.

© REUTERS / Hannibal Hanschke
Turkey Will Permit German MPs at Incirlik Only if They Stop ‘Manipulating’ History
These are by far not the only issues plaguing the increasingly complicated relationship.

Other points of contention include the diplomatic row sparked by a German comedian, who wrote a satirical poem that mocked Erdogan, sparking a firestorm in Turkey. Then the Bundestag passed a resolution that qualified the 1915 massacre of Armenians as genocide. In response, Ankara refused to let German MPs to the Incirlik airbase, home to the US and German forces that are taking part in anti-Daesh efforts in Iraq and Syria.

"In recent years German attitude to Erdogan has markedly deteriorated. Sultan, as he is often referred to in the Western media, has been perceived as a tough, authoritarian leader who has been notorious for persecuting the opposition, Islamist-leaning tendencies and corruption scandals.

Long-harbored antagonism to Erdogan among German politicians is more often breaking through," the media outlet detailed.

© AP Photo / Tolga Bozoglu
Erdogan Set to Flood Europe With Millions of Migrants as EU Refugee Deal Falters
Most recently, European Commissioner for Digital Economy and Society Guenther Oettinger said that Turkey will not become an EU member while Erdogan remains in power.

In addition, Germany's reserved response to the failed military coup that rocked Turkey in mid-July and its concern with the purges that followed angered Ankara. Approximately 40,000 German Turks rallied in Cologne in support of the Turkish president in the wake of the putsch, but German authorities refused to allow Erdogan to address the meeting via a video link.

© AFP 2020 / STR / TURKISH PRESIDENTIAL PRESS OFFICE
Turkey 'Running With Scissors' by Building Its New Foreign Policy
"Turkey was offended by this decision," political analyst Serkan Demirtas told Lenta.ru. "Ankara is trying to improve dialogue with Berlin. For instance, Erdogan and Merkel will hold talks with French President Francois Hollande and Italian Prime Minister Matteo Renzi on the sidelines of the upcoming G20 summit in China. I hope that both sides will find common ground."

The media outlet was not convinced that Germany and Turkey will be able to overcome their differences.

Martha Simms, who worked as a staffer in the German parliament, shared these sentiments. "Germany’s relationship with Turkey has never been so fraught. Diplomatic relations between the two countries have gone from bad to worse with little improvement in sight," she wrote for the National Interest.