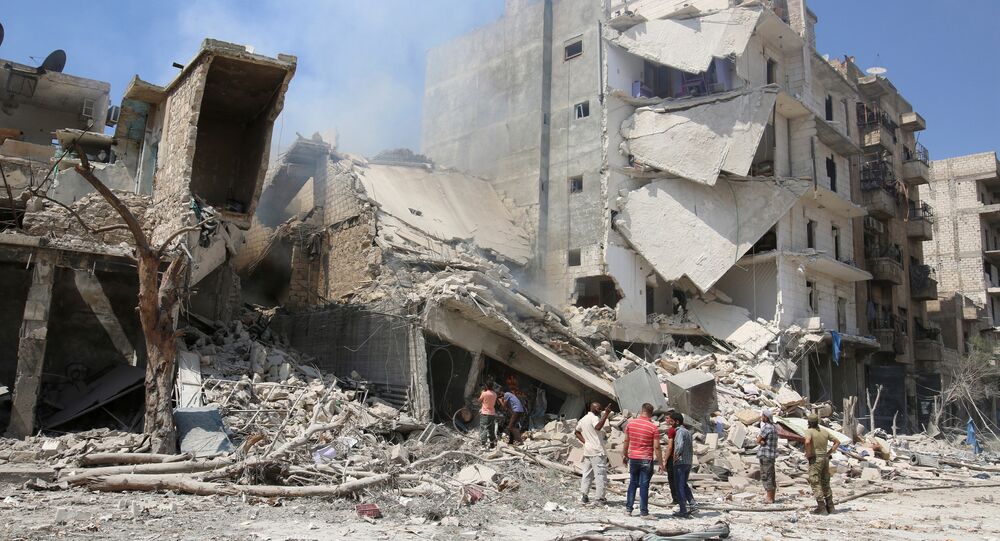 Russia and the United States are rumored to be close to reaching an agreement on joint measures to halt fighting in and around Aleppo, Syria's second largest city. Turkey's ground offensive in northern Syria, formally known as Operation Euphrates Shield, "could play a major role in this process," Svobodnaya Pressa asserted.

The new deal will most likely involve both sides sponsoring a ceasefire in Aleppo and introducing a mechanism to uphold it, but it will not see armed rebel groups put down their weapons or Moscow and Washington conduct joint airstrikes on the city, the media outlet noted.

© Sputnik / Michael Alaeddin
Situation on the Ground in Syria 'Has Begun to Resemble a Global War'
Turkey's ground offensive that was launched on August 24 was "apparently coordinated" with Moscow, Damascus and Tehran, the media outlet said, offering possible conditions of the agreement if it was made.

In addition, "thirteen rebel factions of Fatah Halab, a group that has been fighting against government forces in Idlib and Aleppo, were redeployed through the Turkish territory to northern Syria prior to Ankara's operation," Svobodnaya Pressa said. "Along with the Turkish military they are currently fighting against Daesh and the Syrian Democratic Forces made of Kurdish and Arab fighters."

© Sputnik / Umit Bektas
Turkish army tanks and military personal are stationed in Karkamis in the southeastern Gaziantep province, Turkey, August 25, 2016
© Sputnik / Khaled Al-Khateb
Syrian Army Repels Attacks in North of Hama Province, Up to 50 Terrorists Killed
"There is only one way to resolve the Fatah Halab issue – by adding the group to the list of organizations covered by the ceasefire," Svobodnaya Pressa said. "The group has already published a statement agreeing to deliver humanitarian aid to Aleppo through the Ramouseh suburb and the Castello Road."

Ahrar al-Sham, Jaish al-Islam and Jabhat Fatah al-Sham could also be added to the list of groups covered by the ceasefire regime that Russia and the US brokered in early 2016, Svobodnaya Pressa said.

"If leaders of these groups come to an agreement, then the plan under which al-Nusra Front opted for a rebranding will work. The organization will dissolve in the new structure that will join the ceasefire. This new group will most likely be led by Ahrar al-Sham," the media outlet noted.

© Sputnik / Michael Alaeddin
A destroyed building in the Bani Zeid district in north Aleppo
© Sputnik / Mikhail Alayeddin
Syrian Army Liberates Half of Territory of Air Force School in Southern Aleppo
If these assertions are correct, the new agreement between Russia and the US will not "cleanse" Aleppo of armed opposition, but it will still be able to enforce a ceasefire regime in the city. Some rebel fighters will then join those fighting against Daesh in northern Syria.

There are certain doubts that either Russia or the US will agree to view al-Nusra Front as a member of legitimate opposition, since both countries consider al-Qaeda's former offshoot in Syria to be a terrorist organization.

On Monday, US Special Envoy for Syria Michael Ratney said that all stakeholders "need to intensify efforts" against terrorist groups, namely Daesh and al-Nusra Front, since they pose a threat to the US and the international community.