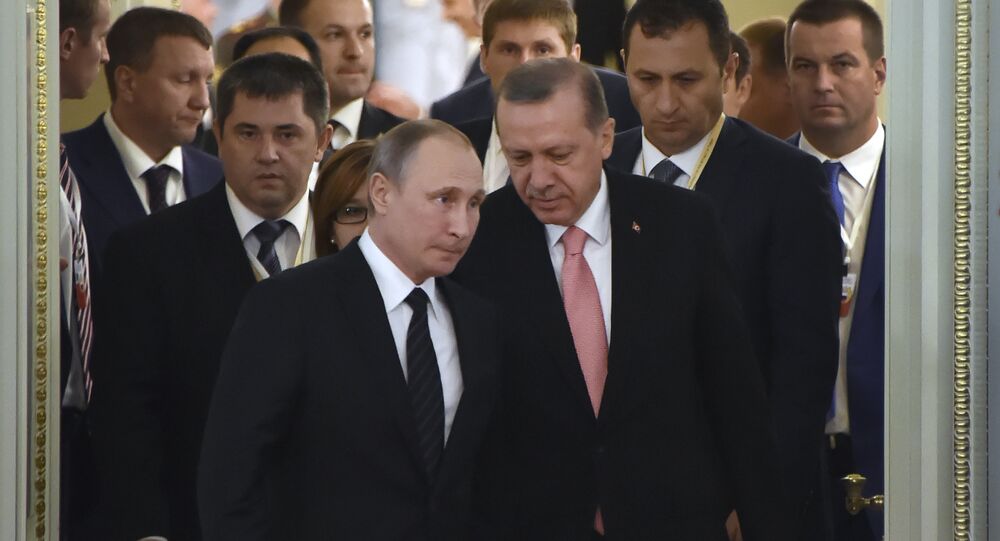 Russia–Iran-Turkey Axis: Common Interests and a Message to the West

It has become clear that Russia, Turkey and Iran are clearly determined to ally, overcoming recent discrepancies; the French news site Atlantico sat down with geopolitical analyst Alexandre Del Valle and former French intelligence senior officer Alain Rodier to discuss what the three have in common and what their axis could mean for the West.

© Sputnik / Georgiy Zimarev
West’s Most Serious Mistakes in Its Relationship With Russia
Iranian Foreign Minister Mohammad Javad Zarif has recently offered to organize a trilateral meeting between Iran, Russia and Turkey to discuss the settlement of the Syrian crisis.

Besides, there is a clear thaw in bilateral relationships between all the three countries.

Hence the French news site Atlantico decided to explore what common interests could unite the tripartite.

“I think this is not necessarily an agreement that augurs a lasting alliance. However the most interesting characteristic feature of the evolving partnership is pragmatism,” well-known European geopolitical analyst Alexandre Del Valle told the website.

He recalled that only recently Shiite Iran and Sunni Turkey were almost at daggers drawn with each other over Syria.

For its part, Russia, on the one hand, did not fully support Iran, but on the other, was still with the backers of the Syrian government pursuing its own interests in the Mediterranean region.

© REUTERS / Mikhail Klimentyev/Kremlin
Three Reasons Why Russia, Iran and Turkey Should Foster Political, Military Ties
Iran wanted to preserve its strategic interests in the Middle East where Syria is the gate to the region.

However this year Erdogan has realized that his pro-jihadist strategy has turned against him: and Turkish citizens have been regularly falling victims to Daesh terrorists and the Kurds, who have been outraged by Ankara;s fight against their Syrian counterparts.

He understood that the Islamists whom he backed are now not only threatening his leadership in his home country, but have also driven a wedge between Turkey and Russia. And he can’t allow the full breakup with Moscow due to economic, energy and military-political reasons.

As a clever and pragmatic politician, more flexible and capable than many think, Erdogan then made a U-turn.

Hence, Del Valle concluded, the main feature of the evolving partnership is pragmatism.

Besides, the three countries have common attitude towards the West, which they commonly regard as “arrogant” and “prone to interference”.

They are not friends, but they do understand that for the sake of realpolitik they need to start negotiating and improving their partner relationship despite clear differences in their local interests.

The geopolitical analysts noted that it is not a rapprochement but an acknowledgment that it is in the interests of each of them to find a common solution.

© AFP 2021 / STR / TURKISH PRESIDENTIAL PRESS OFFICE
Erdogan Plays US and Russia
The dialogue between the three could bring a lot more then rivalry as their economies are intertwined and depend on each other.

Former French intelligence senior officer, director of the French Center for Research and Intelligence (CF2R) Alain Rodier told the website that the three countries have another common interest: to outperform Washington and Brussels, whom they accuse of an intention to impose their own rules in international politics.

The experts also noted that the partnership of the three countries is also a way to demonstrate to the West that they have to take into consideration not only their own interests and there is an alternative to the European Union.

Erdogan, for his part, is trying to pursue his own interest: in return for his estrangement from Russia and Iran he can put forward his own demands to the EU and US.

© REUTERS / Yasin Bulbul/Presidential Palace
Alliance Between Russia, Turkey, Iran on Syria Taking Shape
He understands that the further he goes cooperating with Moscow and Tehran, the more guarantees and compensations he could get from Washington and Brussels.

The US, for its part, needs Turkey as a NATO member state and a partner in other western alliances.

“We are living in a multipolar world where everyone is defending its own interests and without unnecessary moralizaing is maintaining dialogue with anyone who fits into them,” the expert said.

The West should have already understood it and should have forgotten its moralization over human rights protection which is harming its interests and is igniting hatred towards it due to pragmatism and geo-civilizational interests, the expert said.

Erdogan would have respected Europe a lot more if it behaved like Putin when the new Turkish sultan blackmails it or goes too far.