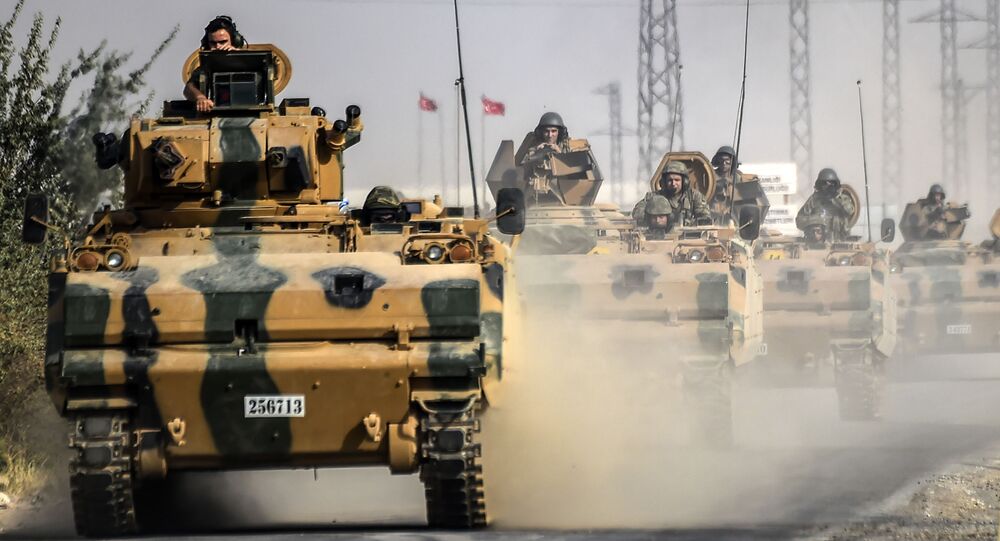 Turkey's military offensive in northern Syria was meant to achieve a local goal, but President Recep Tayyip Erdogan "has succeeded in creating troubles" for all stakeholders involved in the deadly conflict, including Russia and the United States, Russian journalist and political analyst Eugeni Krutikov wrote for online newspaper Vzglyad.

© Flickr / Jorge Franganillo
'I Mediated Secret Talks Between Turkey and Syria' – Former Intelligence Chief
The stated goal of Operation Euphrates Shield, as the campaign is formally known, was to cleanse the area of Daesh and prevent Kurdish forces from advancing further west.

The incursion involved Turkish special forces and tanks, as well as some 5,000 Free Syrian Army fighters cross into Syria and take the town of Jarablus under control. It was backed by US warplanes. In addition, Washington told the Kurds to stay east of the Euphrates River, something that Ankara considers to be a red line.

"What Ankara perceives as a successful operation every other stakeholder, including Russia and the US, views as a pile of ambitions that lacks structured strategy, even on a regional level" he said.

On Friday, Turkish Prime Minister Binali Yildirim said that Ankara will carry out similar operations in the future. Cross-border campaigns, he added, will continue until "we ensure 100 percent security" of Turkish border and until Daesh and "other terror entities are cleared from the region."

Stratfor, a Texas-based think tank, warned that Turkey's involvement in the Syrian conflict is "risky."

"For one thing, going into Syria will ramp up Turkey's military conflicts with [Daesh] and the People's Protection Units (YPG). For another, in sending its troops across the border, Turkey is entering a territory whose nominal government is a longtime enemy and whose powerful foreign backers actively target the rebel fighters Ankara supports," researchers observed.

Turkey has provided assistance to radical armed groups trying to overthrow President Bashar al-Assad since a foreign-sponsored insurgency rocked the country in 2011, morphing into a protracted war. The conflict has claimed more than 280,000 lives and left 11 million people displaced, forcing more than 4 million to seek refuge in neighboring countries or elsewhere.

"Turkey is also hobbled by domestic problems, including a raging Kurdish insurgency and the recent failed coup and subsequent purge, both of which have diminished its qualitative military strength," the think tank added.

Ankara, according to Stratfor researchers, appears to understand the risks involved in conducting military operations in Syria. This is why "instead of a daring charge into Syria, Turkey has made a carefully calibrated entrance," they said.

The controversial operation has also come under fire from Syrian officials and the government, who decried it as a "blatant violation" of national sovereignty.