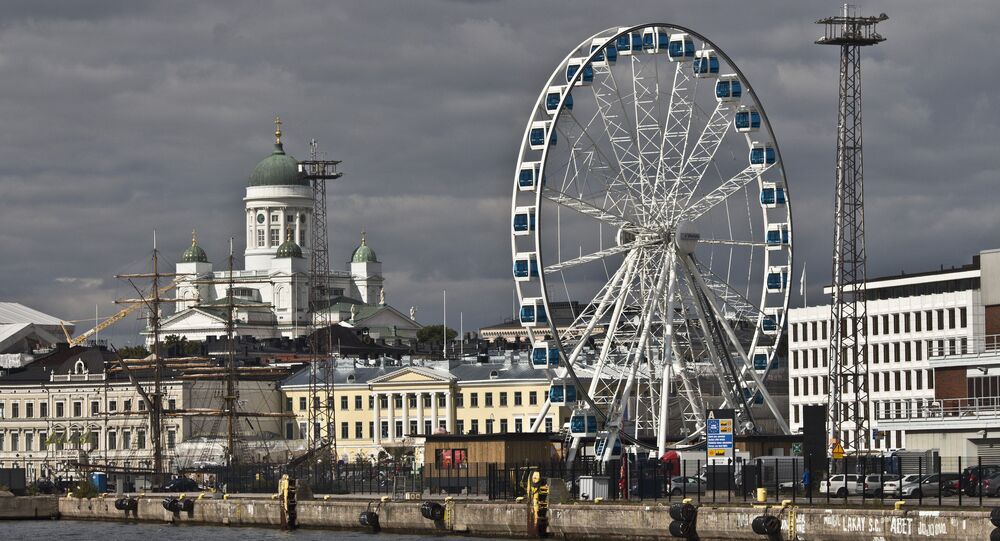 Pivot to the North: NATO Trying to Move Closer to Russia's Borders

In recent months, the United States and the North Atlantic Alliance have pushed for greater security cooperation with the Nordic countries, including Sweden and traditionally neutral Finland. The latter has a 1,300-kilometer long border with Russia, whom the US and NATO view as their key opponent.

© REUTERS / US Navy
Russia Invites NATO to ‘Play Open’ in Baltics, but Only on Quid-Pro-Quo Basis
On Monday, Finish Defense Minister Jussi Niinisto confirmed that Helsinki plans to sign a defense collaboration agreement with the US before the end of the year. The deal is expected to deepen cooperation in areas, where both countries have already worked together, including military training, information sharing and research.

This comes on the hills of Finland taking part in a working dinner at NATO's landmark summit in Warsaw for the first time in the country's history. The Warsaw summit reinforced the alliance's commitment to increase its military presence in Eastern and Central Europe, as well as the Baltic states to contain the non-existent threat emanating from Russia.

© REUTERS / Jonathan Ernst
NATO heads of state and other leaders participate in a family photo at the NATO Summit in Warsaw, Poland July 8, 2016.

Experts agree that Helsinki does not intend to join the North Atlantic Alliance, but it has retained the option to become a member of the bloc in the future.

In an interview on The John Batchelor Show Stephen F. Cohen, professor emeritus of Russian studies at New York University and Princeton University, said that these developments provide ground to assume that the new Cold War has "become more dangerous" than the last one.

"Remember that Finland was a classic case, along with Austria, of a neutral country during the preceding Cold War. Finland prospered by siding neither with the Soviet Union, nor with NATO. And the security arrangement was just fine for Russia," he recalled.

Many Finns came to Russia on a 48-hour visa, the professor added.

"I think that Finland is dry or partially dry or was at that time. They would go to what was then Leningrad (now Saint Petersburg) for a long weekend. They'd bring hard currency. The Soviet authorities abetted this. Finns were heavy drinkers. And if you went to Leningrad for the weekend, you saw them," he explained.

© AFP 2021 / SVEN HOPPE / DPA
NATO’s Eastern Push: Is the Tide Finally Beginning to Turn?
Cohen described Finland's relationship with the Soviet Union as "very good and very close." The relations have largely stayed this way following the end of the Cold War, but the new deal between Helsinki and Washington could change that.

The professor referred to the defense collaboration agreement that Finland and the US are intent on signing as a "backup plan" since NATO has so far failed to make Helsinki part of the military bloc.

This bilateral security arrangement with the US "could lead troops to the Russian border," he added. "That's evidence that this Cold War is even worse than the last one because Finland stayed out of it. It was a point of détente. It's gone."

© AFP 2021 / JANEK SKARZYNSKI
Sweden Lures Finland Deeper Into NATO
Russian officials and experts have long insisted that Moscow poses no threat to its neighbors and beyond, flaying NATO for destabilizing Europe with its increased military drills and deployments.

In an analysis, published by PolitRussia, Anna Garde suggested that political elites in Scandinavia "have become the latest victims of anti-Russian propaganda."

"The pivot to the North was sparked by failures on the eastern flank," she said, adding that since the situation in Ukraine can no longer be used to justify additional military buildup, the bloc has apparently turned to overhyping the non-existent threat from Russian in the Baltic region.

Turkey's Shift to Realpolitik Could Result in Collapse of NATO