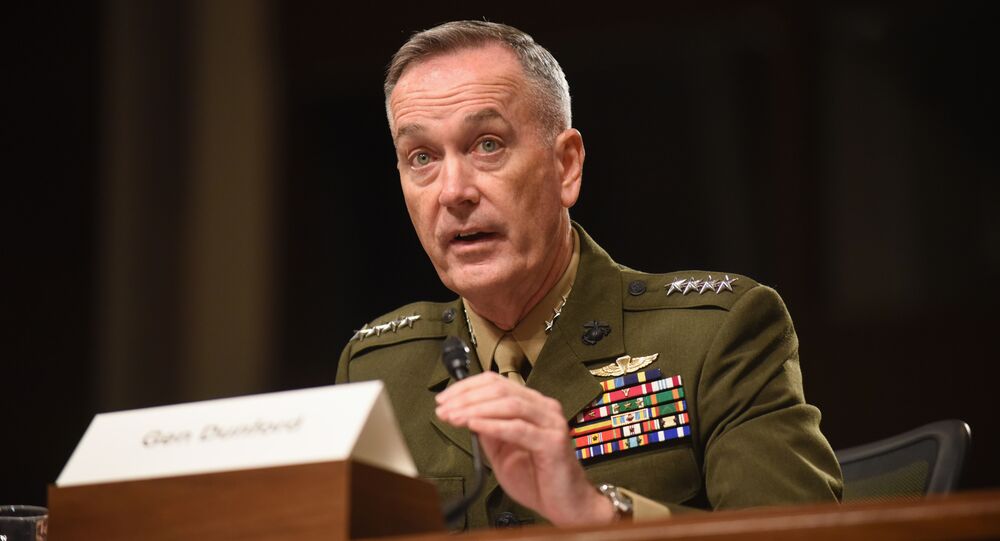 Chairman of the Joint Chiefs of Staff Gen. Joseph Dunford has pointed the finger of blame at Russia for what he called the attempts to "undermine" the NATO alliance during his speech at the National Defense University.

Russia is making attempts to "undermine the most successful alliance in history — the NATO alliance," US Chairman of the Joint Chiefs of Staff General Joseph Dunford claimed during his Tuesday speech at the National Defense University.

"From a US perspective, I would tell you I believe our center of gravity as a nation, through a security lens, is the network of alliances. Russia is trying to erode that," Dunford said as quoted by Department of Defense (DoD) News media source.

© REUTERS / Rodi Said
Pentagon Has No 'Plan B' If Russian-American Talks on Syria in Geneva Fail
According to Dunford, Russia's re-unification with Crimea, its aid to the Syrian government, its "threats" to Georgia and Moldova as well as an alleged support to breakaway regions in southeastern Ukraine indicate Moscow's intent to shake the pillars of the NATO military bloc.

Furthermore, the Chairman of the Joint Chiefs of Staff branded Russia, China, Iran and North Korea alongside with violent extremism as major threats to the US.

"We use those four state actors and one non-state actor… to get an appreciation for where is the force relative to where it needs to be," Dunford emphasized.

During his speech Dunford also pointed out the military capabilities which Moscow and Beijing are currently developing.

According to Komoedov, the ongoing problems within the bloc are triggering fears among NATO senior officials.

"It is ludicrous that the colossus with clay feet says that someone is undermining its unity. Russia has never pursued such a goal; quite the contrary, we have always demonstrated our willingness to establish normal relations with NATO," Komoedov stressed, as quoted by RIA Novosti.

Komoedov recalled that the USSR was among the first states who signaled their readiness to join NATO: the Soviet Union has applied for NATO membership back in 1954. After the Alliance rejected the application, the USSR created its own alternative bloc — the Warsaw Pact.

Following the collapse of the USSR in 1991, it was NATO that contributed greatly to the establishment of the unipolar word order, the Russian official underscored, adding that today the Alliance's leadership still cannot reconcile itself with the fact that Russia is strengthening its defense capabilities and boosting military, technological and political cooperation with other sovereign states.

"General Dunford's statement is reflecting an obvious fear of the NATO leadership which is facing the problems of the bloc's member states. If you scrupulously analyze the critique of NATO voiced by opposition leaders of each of [the Alliance's] member states, you would see that the majority of the US and Europe's population do not support the Alliance's aggressive policy. They don't want to send their fathers and sons to their death in the planet's hot spots, created by NATO's irresponsible actions," Komoedov underscored.

© Sputnik / Vladimir Fedorenko
End of USSR Caught US by Surprise, But Defense Spending Still Soared - Analyst
Komoedov believes that NATO should join Russia at the negotiating table; otherwise the bloc's integrity will continue to erode away.

It is not the first time General Dunford has claimed that Russia and its armed forces present "the greatest challenge" to the US.

Back in mid-March 2016 the Joint Chiefs of Staff chairman noted in his testimony to the Senate Armed Services Committee that "the Russian military presents the greatest challenge to US interests." "Russia is also the only actor aside from the United States that can project strategic power simultaneously in multiple regions," he stressed.