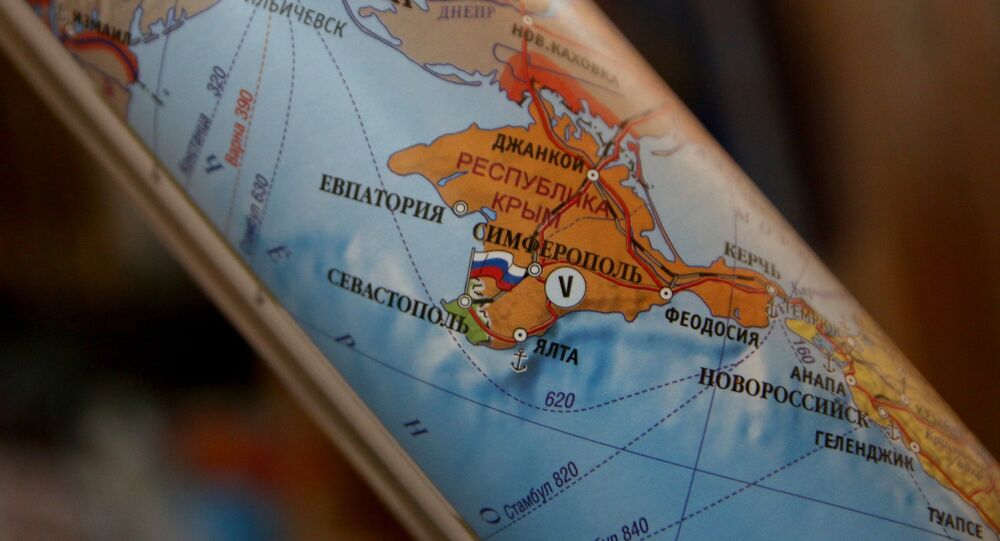 Kiev to Sue Russia? Maybe Crimea Should Ask Compensation for 20 Years of Looting

Ukraine's Foreign Ministry's is talking about filing a lawsuit against Russia over suspected violations of international maritime law in Crimea. In response, Crimean authorities suggest that maybe it's time they file charges of their own against Kiev from when the peninsula was part of Ukraine for what they say amounts to "20 years of plunder."

On Monday, Ukrainian Foreign Minister Pavlo Klimkin promised that Ukraine would soon be lodging a claim with international courts over supposed Russian violations of the 1982 UN Convention on the Law of the Sea in Crimean territorial waters, the Black and Azov seas and the Kerch Strait, as well as "rights to natural resources of the continental shelf."

© Photo : YouTube/USEmbassyKyiv
New US Ambassador to Ukraine Heads to Kiev to Walk Her Dog and Eat Pierogis
Ukrainian officials have been making statements about filing lawsuits against Russia in international courts for months, with Klimkin repeating only two weeks ago that the Foreign Ministry had completed its preparations for arbitration with Russia on the issue of sovereign sea rights surrounding the Crimean Peninsula. Ukrainian officials have continued to claim that Crimea belongs to Ukraine, in spite of the results of the March 2014 referendum, which saw the overwhelming majority of Crimeans vote to break off from Ukraine and rejoin Russia, amid the instability which followed the February 2014 coup d'état.

Responding to Kiev officials' comments about suing Russia, Crimean Deputy Prime Minister Ruslan Balbek told Russia's RIA Novosti news agency that maybe it's time for Crimea to file a lawsuit of their own against Ukraine instead.

"Crimea has the right to file a countersuit, and demand that Ukraine compensates us for the looting of the peninsula over the course of two decades. During this time, under the 'patronage' of Kiev authorities, Crimean lands and real estate were sold for a pittance. Kiev took all of the taxes collected here, but invested nothing into our infrastructure or the local economy," the official complained.

Moreover, Balbek suggested that Kiev officials' statements were little more than 'populist claims', and do not carry any legal consequences for Crimea or for Russia. "It's possible that Kiev will find a court that will issue a ruling requiring Russia to submit to the demands made by Ukraine. But these demands will be fulfilled only in the fevered imaginations of the judges, and the delirious minds of Ukrainian politicians."

© Sputnik / Alexei Furman
Rising Accident Rate in Ukraine's Nuclear Sector Worries Ex-Chernobyl Director
Russian officials and the Russian Foreign Ministry have said categorically and repeatedly that Crimea is Russian territory. At the same time, political analysts commenting on Kiev's lawsuit announcement have suggested that it is completely nonsensical from a legal standpoint, its real purpose being to try to once again raise the Crimean issue before the world community. While most countries have so far refused to recognize the peninsula as part of Russia, more and more countries and companies have effectively recognized Crimea as de facto Russian territory.

Speaking to Svobodnaya Pressa, international law expert Kamil Bekyashev noted that he was surprised by the Ukraine's lawsuit threats, and specifically by the fact that Kiev intends to use the UN Convention on the Law of the Sea. Russia, he noted, has not violated the rules established by that convention in any way.

"This document," the expert explained, "regulates issues relating to maritime areas outside the zones of national jurisdiction; otherwise, they are regulated by the laws of the states to which they belong. In the case of Crimea, which is part of Russia, these are the laws of our country relating to fishing in coastal areas, the extraction of mineral resources, the passage of ships through territorial waters, and so on. Our legislation is fully consistent with the UN Convention of the Law of the Sea."

Kiev, Bekyashev noted, believes that it, as before, should be allowed to engage in fishing, to extract mineral resources and to perform other activities in the exclusive economic zone around Crimea. "But that ship has sailed, metaphorically speaking, and will never come back. Ukraine has lost its sovereign rights to these territories."

© Sputnik / Sergey Guneev
Ukraine: Terror Killing of two Russians was Putin Propaganda to Blackmail Europe
Ultimately, the international law expert suggested that naturally, Ukraine has the right "to go to court, to push for arbitration, to appeal to international courts, and do whatever else it desires. But I do not see the subject under dispute here. But that's for arbitration to decide. If the arbiter accepts the lawsuit, Russia will have many legal arguments with which to defend its interests."

For his part, Dr. Dmitri Labin, a professor of international law at the Moscow State Institute of International Relations, emphasized that in his professional opinion, Kiev has failed to define the issue correctly, since the Convention of the Law of the Sea does not answer questions regarding state sovereignty or ownership of a territory by a particular country. "The Convention does not offer answer questions about the legitimacy of a territory's transfer from one country to another. Therefore, attempting to use this document to challenge the sovereignty of another country is simply absurd."

With regard to Crimea's legal status as part of Russia, Labin suggested that "no one in the international community has yet to present a complaint against Russia in a professional and competent matter regarding the peninsula's accession to Russia. In my view, Crimea's entry into the Russian Federation was carried out entirely within the framework of international law, and as far as I know, many experts share this view. Moreover, it is international law specifically which allowed the residents of the peninsula to formalize their will" and intention to rejoin Russia.

As for the UN Convention on the Law of the Sea, it can be used to determine things like how many nautical miles from its coast Russia has sovereignty over, the zone of its exclusive economic interests, etc. "Ukraine does not have access to the sea in this particular stretch of the coast, and therefore cannot prove its rights to these waters. To claim otherwise is absurd, and no international lawyer will be able to find any grounds to think otherwise. If the sovereignty issue has been resolved, trying to challenge it using documents that are irrelevant to the matter at hand is nothing short of odd."

US Tells Ukraine to Stop Searching for 'Russian Unicorn'

If Kiev Invokes Martial Law, It Won't Be Because of Any 'Russian Threat'