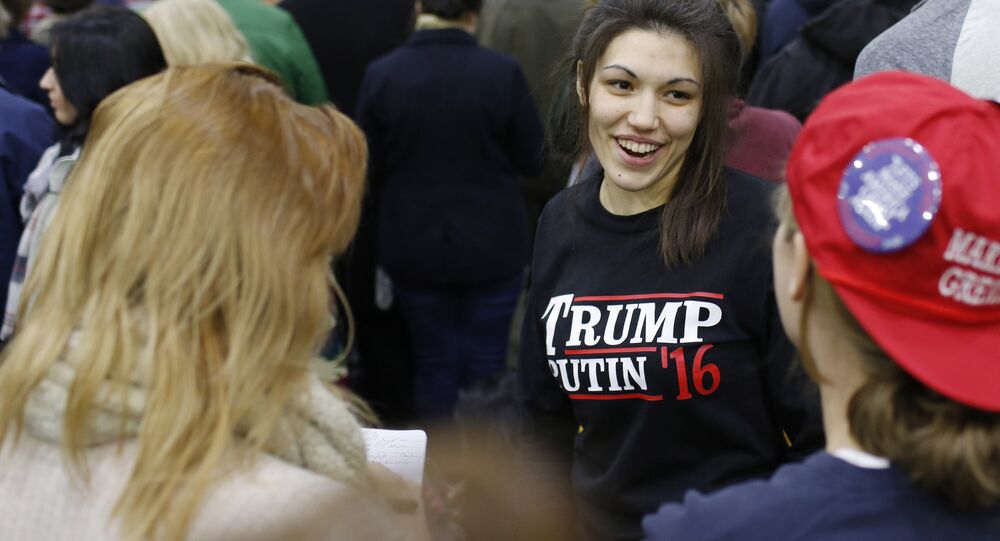 As the presidential race ramps up in the US, supporters and opponents of the American presidential nominees have also seemed to liven up; ex-NATO chief Anders Fogh Rasmussen has decided to fuel the flame by taking a shot at Republican nominee Donald Trump.

© AP Photo / Carolyn Kaster, File
Rethinking America’s Role in the World: New Challenges in ‘an Age of Disorder’
In his interview with the news website of the German TV broadcaster ZDF, NATO’s 12th Secretary General Anders Fogh Rasmussen (2009-2014) explained why Republican nominee Donald Trump will be “an obvious danger” to the alliance if he wins the presidential race.

And the major “threat”, according to Rasmussen, is Trump’s soft attitude towards Russia.

“Not only has he cast doubt on the US defense readiness, but he has his own views on the Ukrainian conflict,” Rasmussen said.

He further explained that Trump refuses to condemn what he claimed was “the illegal annexation of Crimea.”

Furthermore, Trump insisted that there were no Russian soldiers in eastern Ukraine.

“And to crown it all, he praises President Putin!” exclaimed NATO’s former chief.

Meanwhile, Rasmussen continued, the world needs the world’s policeman. And the US, he said, is “the only reliable and desirable candidate for the job.”

© Sputnik /
Over Third of Ukrainian Citizens Oppose Kiev's Plans to Join NATO
The former military chief however did not elaborate who, besides him, was among those who regarded Washington as such.

Referring to Trump’s “strong doubts on the US defense readiness”, he cited as an example the recent remarks of Newt Gingrich, a top Donald Trump supporter and former speaker of the US House of Representatives.

In his recent interview on “CBS This Morning” program Gingrich said that NATO countries “ought to worry about the US commitment.”

When asked about whether Trump and the US would come to the aid of countries like Estonia in the case of a much feared “Russian invasion”, Gingrich said he too "would think about it a great deal."

"I'm not sure I would risk a nuclear war over some place which is the suburbs of St. Petersburg. I think we have to think about what does this stuff mean."

Rasmussen called it “an outrageous statement”, explaining that Estonia currently is one of five out of the 28 NATO member states which meet the requirement to allocate two percent of their gross domestic product (GDP) for defense spending.

© AFP 2020 / YURIY DYACHYSHYN
Can't Pay Your Bill? Join NATO! Ukrainian Military Launches New Ad Campaign
At the same time NATO’s former chief admitted that a strong co-operation between Russia and the West would be of mutual advantage for both sides.

However he noted that he knows President Putin through various meetings. And the West should have a very firm position towards Russia to ensure that Moscow “chooses negotiations over the confrontation.”

Rasmussen also added that he is very worried that an American possible withdrawal from the international arena will “create a power vacuum” which will be instantly filled with the "bad guys", “the villains of this world”.

“Including Mr. Putin,” he specifically added.

Beyond NATO: Proposed Defense Union Should Safeguard European, not US, Interests