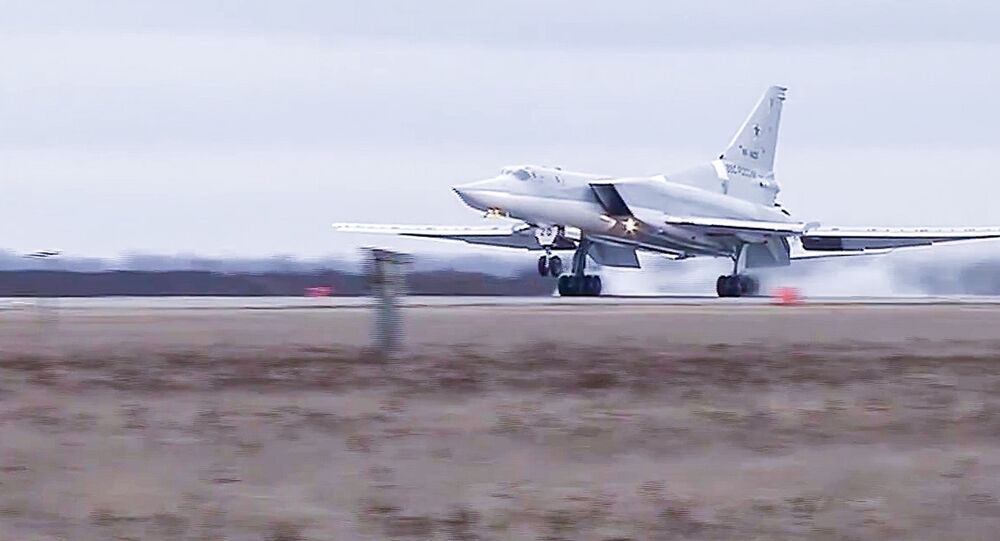 Stuck in Cold War mentality Washington regards Russia's activities in the Middle East as a setback for the US. The White House should learn from Russia what the "realist" foreign policy means, CIA veteran Paul Pillar writes.

© REUTERS / Omar Sanadiki
Why West is Against Russia's Use of Iran's Airbase to Crush Terrorists in Syria
The deployment of Russia's strategic bombers and fighter jets at Hamadan in Iran has become yet another lesson the US should learn from Moscow, CIA veteran Paul Pillar stresses, adding that it has nothing to do with the ongoing military campaign or Russia's increasing presence in Syria.

The US is stuck in a Cold War mindset, "perceiving the world as divided into allies and adversaries," Pillar, a non-resident senior fellow of the Brookings Institution notes in his recent opinion piece for The National Interest.

As a result, Washington "limits efforts at cooperation with the former, and sees the latter as fit only for confrontation, punishment, and isolation," he underscores.

In contrast, the Russian government is "able to pursue its objectives and interests more fully and freely because it is willing to do business with anyone, not limiting itself to business only with states it considers allies and not letting old animosities or current differences get in the way of diplomatic initiatives and practical cooperation," according to the CIA veteran.

Ministry of defence of the Russian Federation
Why Russia's Air Force Deployment at Hamadan is More Than Meets the Eye
Commenting on the Russo-Iranian agreement to bolster military cooperation on Syria Pillar remarks that Russians and Iranians can't be regarded as "buddies." Likewise, Russians and Turks aren't "buddies" either. But that fact does not prevent the Russian leadership from building close ties with both Tehran and Ankara in the Middle East.

What is more interesting, Moscow is strengthening collaboration with Turkey and Israel, regardless of the fact that both countries remain political and economic allies of the West.

© AFP 2021 / Yasin Bulbul
Turkey Could Become a 'Bridge Between Russia and US' in Syria
"In that respect Russia is indeed one-upping the United States," he adds.

As for Washington, it continues to pursue what Pillar calls "a non-realist approach." However, according to the CIA veteran, it is "a poor way to protect and advance one's interests."

"It means associating too closely with misadventures of purported allies (as, for example, the United States is today in supporting the bloody Saudi-led military intervention in Yemen) and missing opportunities to build on the parallel interests that invariably exist even with those states firmly labeled as adversaries," he elaborates.

To make matters worse, while looking at Russia through the Cold War prism Washington perceives any activity of Moscow, let alone its gains, in the Middle East as "a setback for the United States," the CIA veteran adds.

Ministry of Defence of the Russian Federation
Russia Deployed Bombers to Iranian Base That US Could Use 'Prior to 1979'
Thus, unsurprisingly, the Russian Air Force's deployment at Hamadan airfield has immediately prompted criticism from the West.

According to the US State Department spokesman Mark Toner, the move "continues to complicate what is already a very dangerous situation."

"And so our concerns remain very vivid. We're trying to remain focused on… trying to get a cessation of hostilities back in place in Syria. And this doesn't help it," Toner said, as quoted by Reuters.

Speaking to Sputnik, Iranian lawyer Amir Hossein Norbakhsh called attention to the fact that Washington does not give Russia and Iran credit for their efforts aimed at fighting Daesh (ISIS/ISIL).

"The United States has turned a blind eye on how dangerous Daesh and other terrorist groups (some of which received assistance from the US) are to the region and the world. At the same time, Washington does not give credit to Russia and Iran for their massive contribution to tackling the threat that terrorists pose," Norbakhsh told Sputnik, stressing that Russia by no means violates UN Security Council Resolution 2231.

Both Washington and Moscow are pursuing the very same goal in the region — they are trying to defeat Daesh and al-Qaeda.

"A wiser United States would also think of Russia itself, which has the label of adversary firmly affixed to it, in realist terms in which that label would not prevent the United States from exploring and exploiting areas of parallel interests," Pillar notes.

Washington Considers Russia's Use of Iranian Airbase 'Not Helpful'

Lavrov: US Unable to See Difference Between Moderates, Terrorists in Syria