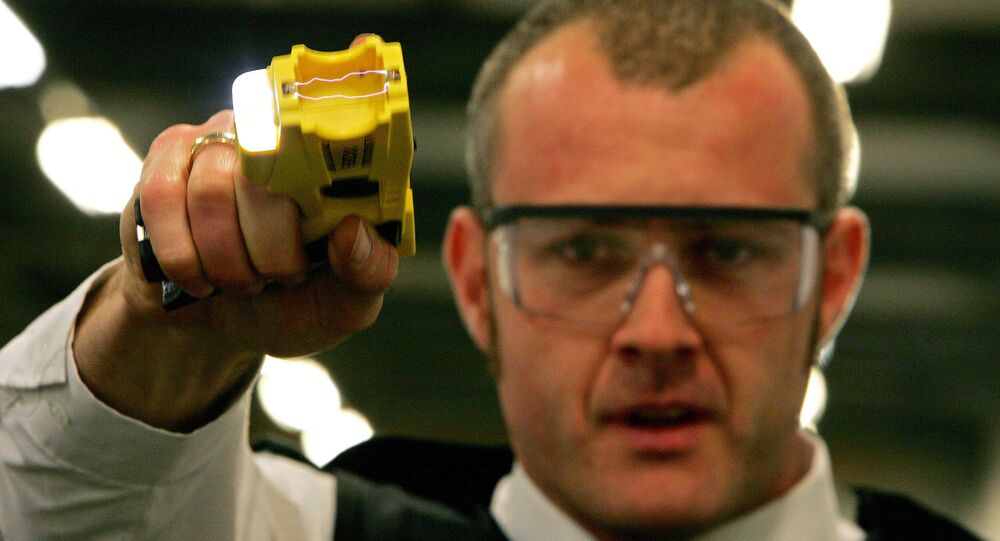 The UK Police Federation have decided to give rank and file officers more access to Tasers. This comes a day after the death of former Priemership footballer Dalian Atkinson, who died from excessive use of a 50,000-volt shun gun by a police officer in Telford.

Calum Macleod, the Federation’s vice-chairman, defended the decision saying that officers needed these weapons and said that the reason was due to the declining number of police officers in the force.

Campaigners, however, have long been calling for a fresh look at police Tasering in Britain.

Dear @MayorofLondon Why does @metpoliceuk taser more blacks than whites? Why are more blacks injured on arrest? https://t.co/mpauLlAiPg

​Dalian Atkinson, former football player for Aston Villa, has died after police Tasered him near his father's home in Telford in on Sunday 14 August.

Witness reports said that Atkinson shouted: "It's not working," when the police struck the first Taser, allegedly two more rounds were fired, each one administering a 50,000-volt shock. The 48 year-old died of a cardiac arrest about 90 minutes after the incident.

Dalian Atkinson always appeared to play with a smile on his face. Such sad news. May he rest in peace. #AstonVilla

​In a statement from West Mercia police, they confirmed that officers were called to Meadow Close at around 1:30 a.m. in response to "concern for the safety of an individual."

They said a man was pronounced dead at 3 a.m. A postmortem is due to be carried out later this week, according to the Independent Police Complaints Commission (IPCC).

Terrible news about Dalian Atkinson. Losing his life after being tasered by police. Thoughts are with this fine footballer's family. #RIP

​The police officer who Tasered Atkinson was not wearing a body camera and the IPCC have launched an independent investigation into what happened.

The incident has led campaigners to accuse the police of using excessive force and said that the incident has raised some serious questions around policing, and the actual use of Tasers.

According to relatives, Atkinson suffered from a bad heart. He also had some mental health problems.

The taser has never been a safe, non-lethal weapon. Tasers kill. Tasers do harm. Yet the police want MORE of them on our streets.

​Amnesty International (AI) have worked against the use of Tasers in Britain and issued a report in 2015, designed to curb the excessive use, which described the UK as becoming to heavily dependent their use.

​Oliver Sprague, AI's Arms and Policing expert, told Sputnik that the details of this particular case involving Dalian Atkinson had not yet fully emerged, but added that Tasers are a lethal tool and very dangerous.

"Our sympathies go out to the family in this case. Tasers can be a valuable tool, but are dangerous and can very obviously be lethal. They must only ever be used as a last resort in life or death situations," Oliver Sprague told Sputnik.

Thanks for the memories! Rest in peace Dalian Atkinson! Holte Ender in the sky. #RIPDalian https://t.co/bt5ozRQxpk

​"Amnesty has long standing concerns about the use of Tasers against individuals with mental health concerns. It's also impossible to discern whether an individual has an underlying health condition in the heat of the moment before a Taser is deployed."

Mr. Sprague said that the solution is to ensure officers are given the appropriate training and that they are competent enough to use a weapon of this kind.

"We want to see officers given similar levels of training to the levels any armed officer is given so they are properly equipped to take a decision, and their skills and competency are constantly monitored and assessed.

"Keeping Tasers in the hands of the most highly trained officers is the best way of avoiding more tragedies like these," Mr Sprague told Sputnik.

​These comments were echoed by solicitor Sophie Khan, who is an expert in the use of Tasers within the police force and understands the detrimental effect they can have on people. Ms Khan said in a recent interview, that it was clear the police had not learnt from the previous deaths caused by Tasers and the solution to this and prevent it from happening again would be for officers to understand the impact of Tasering someone and to learn from past mistakes.

​Atkinson first started playing football for Ipswich Football club where he scored 18 goals during his four year period there. He later moved to Aston Villa where he scored his most famous goal against Manchester United in the FA Cup Final.