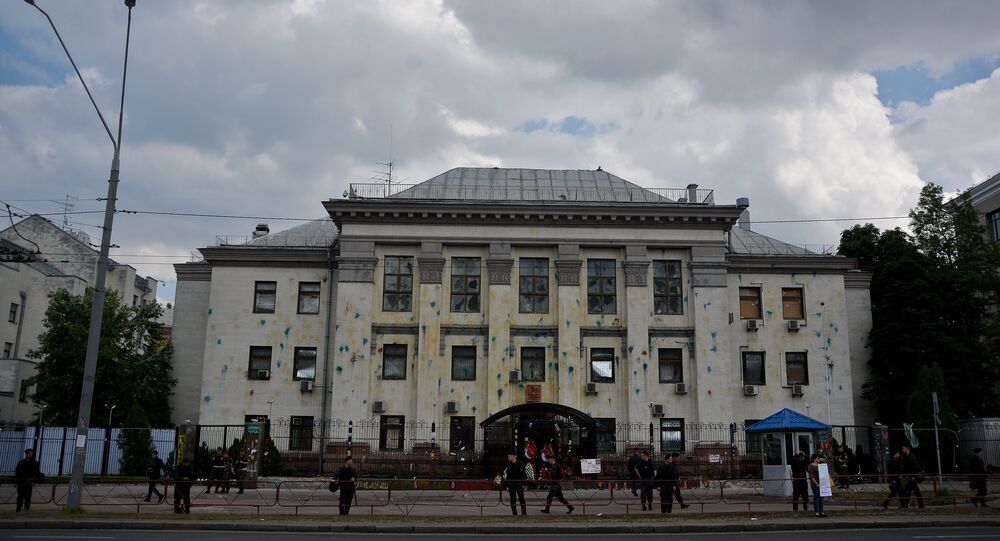 Amid discussions in Russia about breaking off diplomatic relations with Kiev after the discovery of a Ukrainian spy ring in Crimea and Kiev’s recent rejection of Russia's proposal for its next ambassador to the country, experts suggest that the diplomatic standoff between the two may be used by the US as a bargaining chip.

© Sputnik / Vitaliy Belousov
Here's What Will Happen if Moscow Breaks Off Diplomatic Relations With Kiev
On Friday, Russia’s Izvestia newspaper reported that Russia is considering cutting its diplomatic ties with Ukraine in response to a supposed attempted sabotage plot in Crimea that Ukrainian intelligence was allegedly behind.

According to the news outlet, one of the possible measures open to Moscow in retaliation of Kiev's actions could be to close the Russian diplomatic mission and recall the staff of its embassy in Ukraine.

“One of the options for a possible, strict response may be to break off diplomatic ties. Moscow is working on such an option. However, the head of the country will have the last word, he will take a decision based on all the data available,” the outlet said citing its unnamed foreign services source.

On the same very day Russian Prime Minister Dimitri Medvedev addressed the possibility, saying that Moscow “wouldn't want the situation to end like that,” but that the Russian president may be forced to do so if no other options remain open.

Earlier in August Kiev has rejected Russia's proposed candidate Mikhail Babich as its next ambassador to Ukraine after President Putin dismissed previous envoy Mikhail Zurabov from the post on July 28.

Commenting on Kiev’s decision, deputy secretary of the Civic Chamber and former deputy general secretary of the UN, Sergei Ordzhonikidze said that it illustrates that the country is not interested in improving relations with Russia.

“The appointment of an ambassador is a step aimed at improving relations, which Kiev does not want,” he told Russian website Russia Direct.

However Vladimir Bruter, of the International Institute for Humanitarian-Political Research, suggests that it might be Washington behind the decision.

“If they had received a command from Washington to agree to the ambassador, an agreement would have been received within 10 minutes,” Bruter told the website.

“But the US is going to use this situation as a bargaining chip. They may put forth some proposal as a condition for their approval of the ambassador. This may or may not become a subject of bargaining,” he suggested.

© AP Photo / Inna Varenytsia
Russia Insists on Ambassadorial-Level Leadership in Moscow, Kiev
Following the recent reports on the possible cut-off of the diplomatic ties, the Chairman of the State Duma Committee on the Commonwealth of Independent States (CIS), Eurasian Integration and links with compatriots Leonid Slutsky also suggested that the West will attempt to use it as another chance to marginalize Russia and worsen its image.

He hasn’t ruled out the complete break-off of relations however called it “theoretically possible” in an interview with RIA Novosti.

Vladimir Zharihin, Deputy Director of the Institute of the CIS suggests that there is no need for Moscow to vocally break its diplomatic relations with Ukraine since they are already actually frozen: since 2014 there has been no Ukrainian ambassador in Russia.

It is more likely that it is going to be Kiev who will initiate the cut-off as President Poroshenko will now need to demonstrate that he is a strong leader, he said in an interview with the Russian RBC website.