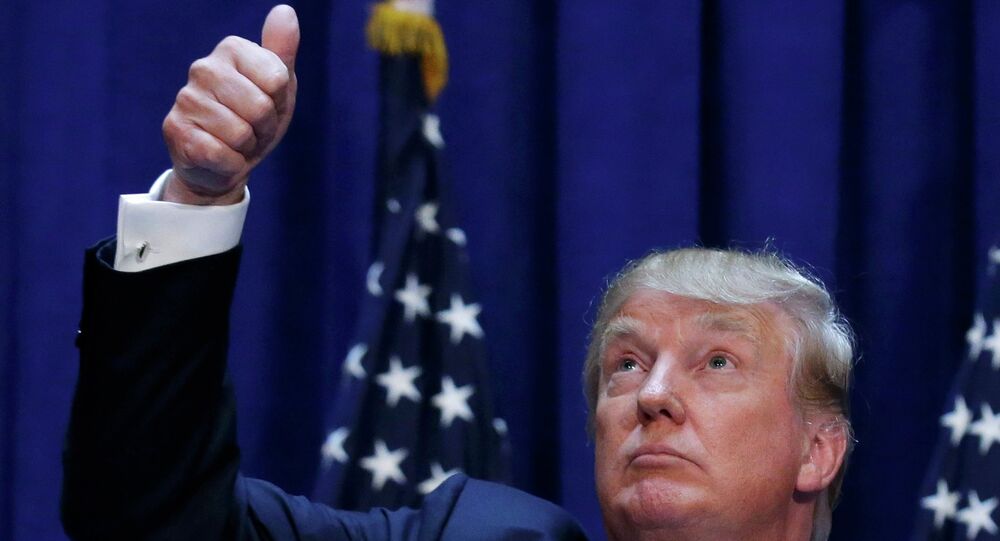 US-Russian Detente 2.0: Why Trump's Remarks About NATO Make a Lot of Sense

Whether one likes Republican presidential nominee Donald Trump or not, a restored relationship with Russia proposed by the presidential candidate would serve everyone's interests and make the world safer.

Donald Trump's remarks regarding NATO's obsolescence and a hidden catch behind Article 5 have triggered a maelstrom in Western media.

Former NATO secretary general Anders Fogh Rasmussen told Politico.eu that "[Trump] has led it to an extreme by first stating that he considers NATO obsolete. Then he made a more specific statement on Article 5 [the principle of collective defense] saying that in his opinion, the American obligation to live up to [it] would be very much dependent on individual member states' contributions to NATO."

© AFP 2020 / Jim WATSON
Why is Trump Proposing a Detente With Russia?
However, along with giving the shivers to the US' NATO allies Trump has raised important questions about burden-sharing and NATO's true goals.

As Barry R. Posen of Massachusetts Institute of Technology noted in his Op-Ed for The National Interest, Washington's alliances come at a high price at the same time bringing very limited benefits.

"At best, our allies defend themselves with vast assistance from the United States," he noted, highlighting that "the strategic benefits to the United States of its NATO commitments" are "slim."

US author and contributing editor at the Atlantic Jeffrey Tayler echoes Posen:

"Trump's various offenses aside, on his latter point, there can be no doubt: of NATO's 28 member states, only five spend the recommended 2 percent or more of their GDP per year on defense; Estonia is the sole Baltic country to meet the 2-percent benchmark. The United States, meanwhile, covers 72.2 percent of NATO's budget."

On the other hand, would the US-led NATO alliance risk a direct confrontation with Russia if the latter attacked the Baltics?

"Far from making NATO stronger, inducting the Baltics may have turned Article 5 into a dead letter, and 'the most important military alliance in world history,' as Senate Majority Leader Mitch McConnell has called it, into a paper tiger," Tayler points out.

© AP Photo / Alik Keplicz
NATO Buildup on Russia's Borders: Mobilization for War or 'Just Business'?
But that is not all. The US author highlights that it's "fair to ask why NATO, in the absence of a Soviet or Soviet-level threat, or any real public debate, has been expanding beyond its historical mandate."

The Alliance was created as a bulwark against the Soviet Union. On the eve of the USSR's collapse Secretary of State James Baker gave his Russian counterparts "iron-clad guarantees" that NATO would not expand "one inch eastward" following the reunification of Germany, Tayler recalls.

After the Soviet leader Mikhail Gorbachev accepted the deal, the US broke the promise.

Indeed, "the expansion of NATO over a twenty-year period began with [US President Bill] Clinton in Berlin where the divide was, and [stretched] all the way to Russia's borders… it has been the largest expansion in modern history," as Stephen F. Cohen, professor emeritus of Russian studies at New York University and Princeton University, noted in one of his latest interviews on The John Batchelor Show.

© Sputnik / Michael Klimentyev
Threat? 'Washington Has Forgotten How Putin Lent the West His Helping Hand'
The US' bombing campaign in Yugoslavia in 1999 "marked the beginning of Moscow's ever-more troubled relations with the West," Tayler notes.

Although Russia does not pose any threat to the US and its Western allies, NATO continued its march toward Russia's borders, swallowing former Warsaw Pact members and Soviet Republics one by one.

In addition, the Alliance has recently activated its missile defense shield in Romania, regardless of Moscow's protests.

"As the world's most powerful military alliance slid up to Russia's borders, the West couldn't have expected Putin to sit idle. After all, what would the United States do if Russia began stationing troops in northern Mexico?" the US author asks, referring to Russia's growing security concerns.

In this context, the author notes, Trump's warning that any attempt to retake Crimea could lead to WW3 are not that groundless.

Instead of boosting an anti-Russia stance, Washington policymakers should consider a Détente 2.0 policy toward Moscow, Taylor stresses.

"A restored relationship with Russia would serve everyone's interests and make an increasingly dangerous, more chaotic world safer. It is a good idea-even if Donald Trump suggested it," the US author concludes.

Clinton Unlikely to Keep Kerry on Board if Elected