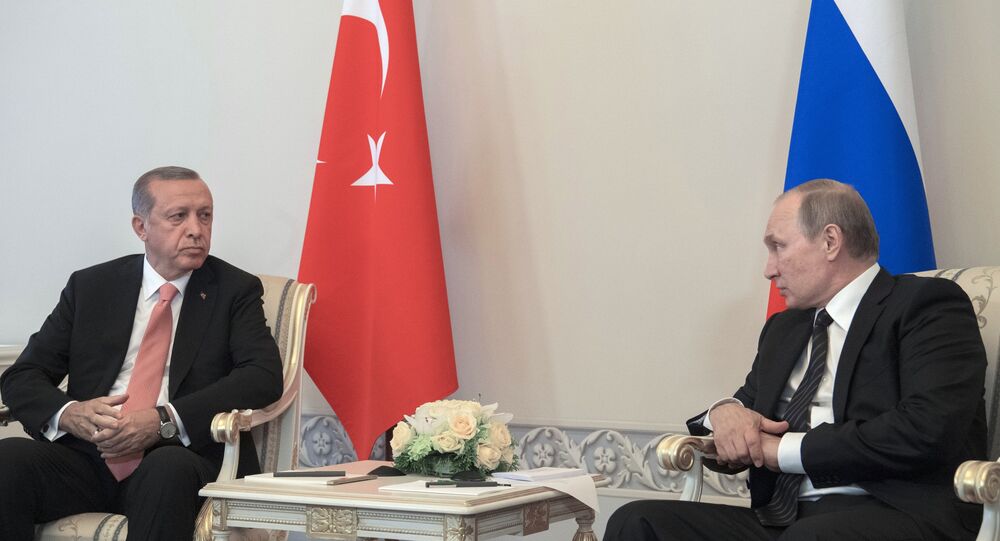 German newspapers assessed the meeting between Russian and Turkish leaders differently. Some of them viewed it as a chance to reach progress on the settlement of the Syrian crisis, while others considered it a sign of alienation between Western countries on the one hand, and Turkey and Russia on the other.

Alienation from the West

© Sputnik / Aleksey Nikolskyi
Putin and Erdogan Talks: Will Russia-Turkey Reset Spell the End of NATO, EU?
Some German media perceived the meeting of Turkish and Russian presidents as a sign of a deepening gap between the West and the two countries.

For instance, German newspaper Frankfurter Rundschau indicated the meeting as a warning signal to the European Union.

"Erdogan's first trip abroad after the failed military coup is a sign of Turkey's alienation from the West, and a warning signal to the EU, which, after the attempted coup, dealt with its difficult partner in an inadequate way," the newspaper wrote.

Journalist Stefan Kuzmany wrote for Spiegel Online that the sudden reconciliation between the two countries demonstrates the ability of both leaders to change political course without any ideological preconditions.

"Sudden reconciliation between Erdogan and Putin is calming to a certain extent because the ability of both leaders to change policies means that despite constant striving for their own benefit, they don't pursue any certain ideology," Kuzmany wrote.

At the same time, German newspaper Handelsblatt is suspicious about rapid reconciliation between Moscow and Ankara.

"After the Russian fighter jet was shot down by Turkey, there was an ice age between Putin and Erdogan. Now, the two leaders have met in St. Petersburg. Has everything been forgiven and forgotten?" the newspaper asked.

"In international politics a smile says more than a thousand words. After months of sanctions, insults and threats, Vladimir Putin and Recep Tayyip Erdogan are sitting in a luxury Konstantinovsky Palace in the suburbs of St. Petersburg and make a good face. This is the first meeting […] between the two presidents since the beginning of the serious Russian-Turkish crisis. Despite the conflict, the greetings look friendly," the newspaper wrote.

German regional newspaper Nürnberger Zeitung viewed Erdogan's visit as a premise to resolve the conflict in Syria, because the leaders of the two countries finally started to communicate with each other.

© Sputnik / Alexei Druzhinin
Germany Welcomes Meeting Between Putin, Erdogan - Foreign Ministry
For its turn, Neue Osnabrücker Zeitung believes that the leaders of the countries have common economic interests, while the newspaper Rhein-Neckar-Zeitung views Erdogan as a victim of growing isolation. "They won't be friends, at least for strategic reasons," the newspaper wrote.

On Tuesday, Russian President Vladimir Putin met with his Turkish counterpart Recep Tayyip Erdogan, who arrived in St. Petersburg for thr first talks to reset bilateral relations after the November 2015 downing of a Russian aircraft by Turkey. The two leaders agreed on a series of measures to boost economic and other ties.

Tensions have begun to thaw since the Turkish president offered his condolences to the family of the slain Russian pilot in June.