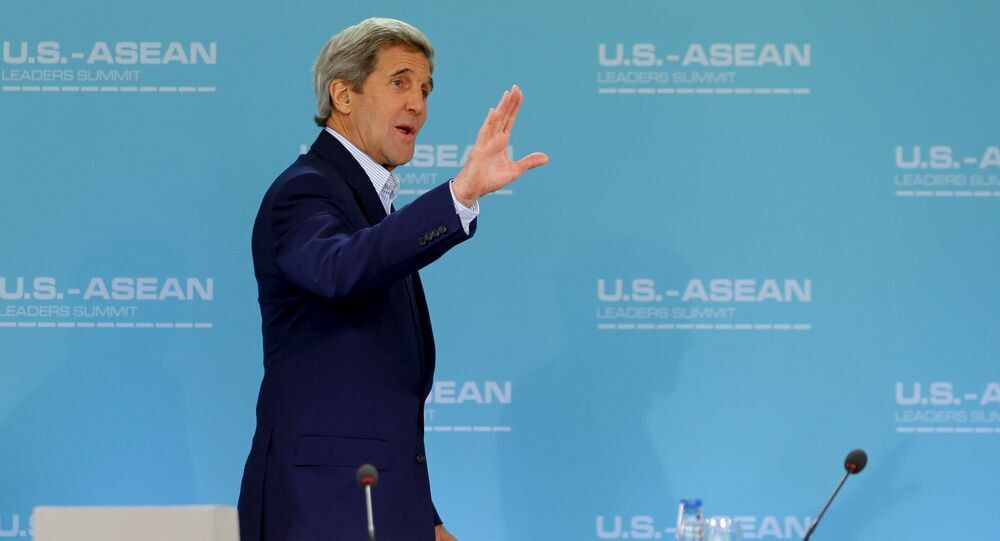 Clinton Unlikely to Keep Kerry on Board if Elected

Leading now Donald Trump in the US 2016 presidential race Hillary Clinton stands a good chance of winning the election. The question then arises whom Clinton will appoint as her secretary of state. Given John Kerry's experience some observers suggest the Democratic nominee may keep him on board.

The question on everyone's lips is whether Hillary Clinton will keep US Secretary of State John Kerry on board if she wins the US presidential election, American journalist Michael Crowley asks in his opinion piece for Politico.com.

"Several sources said they believe Kerry might welcome staying in the diplomatic fray and that his institutional knowledge would be valuable, either if he stays on as secretary or as a special envoy tasked with a specific issue in which he is deeply versed, like Syria, Iran, or the Israeli-Palestinian conflict. They note that when Clinton came to the State Department in 2009, she named high-profile designated fixers for Iran, Afghanistan-Pakistan, and the Middle East peace process," Crowley underscores.

© REUTERS / Mark Kauzlarich
If Hillary Becomes US President, She 'Will Look for Excuses to Bomb Damascus'
At the same time, it is hardly arguable that the Democratic presidential nominee and the current Secretary of State have adopted different positions toward US foreign policy, especially in regard to the Middle East.

In his interviews on The John Batchelor Show Stephen F. Cohen, professor emeritus of Russian studies at New York University and Princeton University, has repeatedly suggested that John Kerry belongs to a Washington "party of peace," which is seeking a possible détente with Moscow in order to settle the Syrian and the Ukrainian crises.

In contrast, Hillary Clinton does not regard the Kremlin as a US partner and has already signaled that she is going to pursue a tougher policy toward Syrian President Bashar al-Assad than the Obama administration.

"A Clinton administration will not shrink from making clear to the world exactly what the Assad regime is," Jeremy Bash, Clinton's foreign policy adviser told The Telegraph in late July, adding that the Democratic presidential hopeful will order a "full review" of the US policy on Syria, if she assumes the presidency.

© AP Photo / Brian Snyder
Hillary Clinton's Camp Prepares for an Endless War in Syria
There are clear signs that the Clinton administration is likely to play the military card in Syria.

At the same time Hillary Clinton is likely to undo Kerry's progress on Iran, by adopting a "distinctive muscular foreign policy" toward Tehran, experts on Mideast affairs Amir Handjani and Ariane Tabatabai suggested in mid-July in their Op-Ed for The National Interest.

[Hillary Clinton's] hawkish policies are part of a 'broader strategy to confront Iran's aggression across the region,' as she discussed during her speech to AIPAC [The American Israel Public Affairs Committee]. Far from projecting American strength and advancing American interests, this proposed policy is likely to undermine them," the scholars underscored.

They called attention to the fact that John Kerry has done a lot to strengthen diplomatic relations with his Iranian counterpart.

For her part, Clinton apparently believes that "more sanctions are better because they force Iran to the negotiating table," they noted.

In any event, Clinton "has a deep bench of highly qualified allies," Crowley remarks referring to potential candidates to replace Kerry.

However, "none of these candidates is seen as distinctly ideological, and some foreign policy insiders said Clinton will mostly likely choose someone to implement her foreign policy vision, not to come up with one of their own," the journalist stresses.

And that might also signal that Hillary Clinton is unlikely to keep Kerry on board, even if it means the loss of "personal relationships" with some Middle Eastern partners or Moscow.

Finally, "it's far from certain that Kerry would want to carry on after four grueling years of constant travel," the journalist notes.