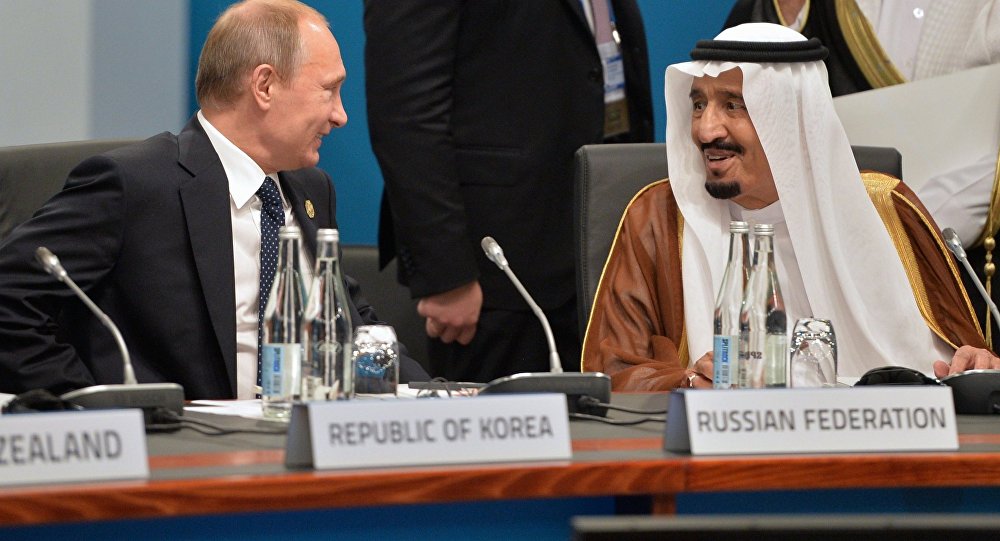 Russia Creating Coalition in the Gulf to Resolve Syrian Crisis

Russia stands a pretty good chance of attracting the Gulf Cooperation Council countries’ support while resolving the Syrian crisis. For its part, Riyadh has signaled recently that it is interested in building close relations with Moscow regardless of a difference of opinion on the Syrian crisis.

Russia's charm offensive launched by President Vladimir Putin in the Gulf back in 2012 has borne fruit, according to Samuel Ramani, a DPhil candidate in International Relations at St. Antony's College, University of Oxford.

"Through stronger investment linkages and diplomatic overtures, Russia has attempted to carve out a more prominent geopolitical role in the Persian Gulf… Stronger relations between Moscow and Saudi Arabia's closest allies have caused some GCC [the Gulf Cooperation Council] countries to be more receptive to Russia's calls for a political solution in Syria. Saudi Arabia's fear of being isolated from the Arab world's consensus could cause Riyadh to eventually soften its belligerent anti-Assad approach and diplomatically reengage with Russia," Ramani writes in his article for The National Interest.

© AP Photo / Emrah Gurel
Shadows of UAE, Riyadh Emerge Behind Failed Coup in Turkey
According to the British academic, the dire prognoses that Russo-Gulf relations would tremendously deteriorate in the wake of Moscow's involvement in Syria have been proven wrong.

Ramani calls attention to the fact that despite obvious disagreements over Syria, Russia has bolstered economic ties with Qatar, the United Arab Emirates (UAE), Oman and Kuwait "to counter Saudi Arabia's hegemony in the Persian Gulf."

Moscow has created a coalition together with Oman, Kuwait and the UAE to counter the Saudi-Qatari bloc, the British scholar explains.

Furthermore, given Russia's "strengthening of ties" with Algeria, Iraq and Egypt, Moscow stands a good chance of swinging the balance in its favor during the peace talks on Syria.

"Should [Vladimir Putin] succeed, Saudi Arabia and Qatar could risk regional isolation if they do not moderate their intransigent opposition to Assad," Ramani underscores.

© AFP 2019 / ANWAR AMRO
Has Washington Finally Accepted That Assad Can Stay?
The question then arises whether Saudi Arabia will retaliate against Russia. Hardly, Ramani suggests.

Arguing with US analysts Jonathan Schanzer and Boris Zilberman, Ramani assumes that Russo-Saudi relations would rather transition into a "cold peace," not hostility.

At the same time, in light of Ankara's change of heart toward Moscow it is unlikely that Saudi Arabia would risk its relations with Turkey to strike back at Russia.

On Sunday Saudi Foreign Minister Adel al-Jubeir stressed that "the differences of opinion with Russia regarding the Syrian crisis do not impact the level of cooperation."

"Both sides are carrying on coordinating and consulting on the matter in order to converge approaches to the problem," al-Jubeir said, as quoted by the Al Riyadh newspaper.

© Photo : http://www.russianhelicopters.aero/
Riyadh, Qatar and Turkey 'Responsible for Downing Russian Helicopter in Syria'
Commenting on the issue, US expert on Middle East affairs Mark N. Katz recalled that in a July interview with Politico.eu al-Jubeir showed "a desire for improved Saudi-Russian relations" in exchange for Russia abandoning Bashar al-Assad and its Iranian allies.

However, "this is definitely not what Moscow wants to hear from Riyadh," Katz stresses in his opinion piece for Lobelog.com.

Al-Jubeir's latest statement that Riyadh still wants to improve Russo-Saudi relations may indicate the Gulf kingdom's intention either to give its Western allies the shivers, or to create differences between Moscow and Tehran, the scholar suggests.

However, according to Ramani, Riyadh's "hostility" toward Russia is overstated. In reality, "Riyadh's overarching agenda is to reduce its security dependence on the United States and maintain Saudi Arabia's position as the Arab world's most influential country."

"Therefore, Saudi Arabia is likely to respond favorably to Russian diplomatic overtures if Putin can build a broad-based Arab coalition around a political solution to the Syrian crisis that includes Assad," the British scholar emphasizes.