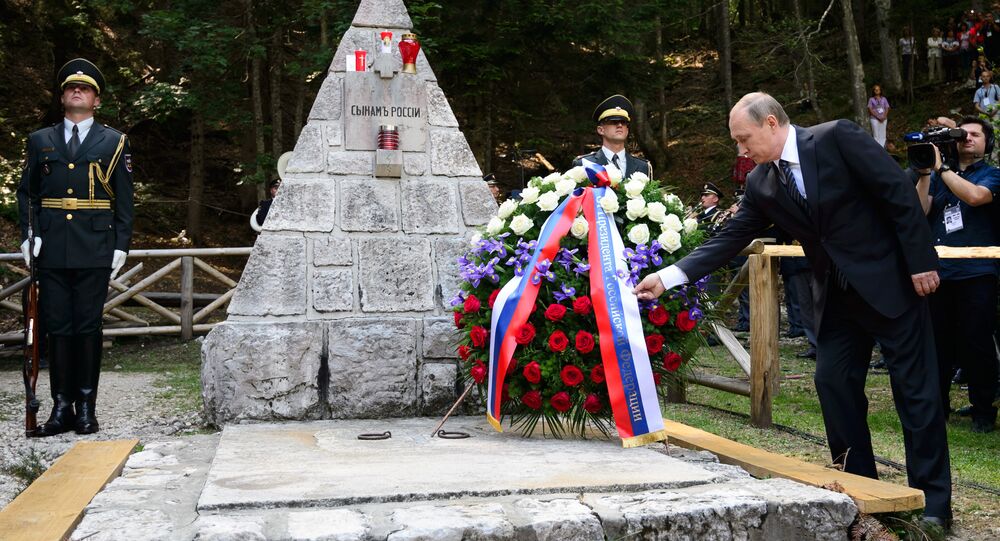 What's Behind Russia's Cordial Relations With This NATO Member

Russia's warm relationship with Slovenia, as evidenced by President Vladimir Putin's latest visit to the small Alpine nation, might come as a surprise to some considering that the latter is a member of NATO and the European Union. But Ljubljana, unlike some former Soviet states, wants to foster cooperation with Moscow.

"Slovenia has always remained Russia's loyal economic and political partner," Nadezhda Pilko, a senior researcher at the Institute of Slavic Studies of the Russian Academy of Sciences told Gazeta.ru.

True, both countries have maintained close ties despite the fact that the European Union imposed sanctions on Moscow following the outbreak of the Ukrainian civil war and Crimea's democratic reunification with Russia. Common cultural and ethnic heritage is one of the reasons behind this friendship.

"For Slovenia, a very disciplined member of the EU and NATO, the notion of cultural Slavic closeness is extremely important," Georgy Engelgart of the Institute of Slavic Studies observed. "Apart from this, Slovenia doesn't really have reservations about Russia, unlike, say, Poland. And Ljubljana is trying to capitalize on this."

© Sputnik / Aleksey Nikolskyi
Russian President Vladimir Putin at the memorial ceremony marking the centenary of the Russian Chapel on the Vrsic pass in memory of Russian soldiers who died there during World War I
© Sputnik / Alexei Nikolsky
Putin Arrives to Slovenia to Hold Talks With President Pahor
This was the spirit during Vladimir Putin's Saturday visit to the Alpine country.

Putin praised the Slovenian people for their "caring attitude towards our shared history," adding that the country has always extended "a very warm welcome" to Russian guests. For his part, Slovenian President Borut Pahor said that "we are doing our best to preserve Russian-Slovenian friendship" and thanked Putin for the opportunity to discuss "new ways of developing the bilateral relations."

On July 30, the Russian leader took part in the centenary commemoration of a Russian chapel built near the Vršič Pass and the unveiling of a monument to Russian and Soviet soldiers who fell in Slovenia during both world wars.

Unveiling of a monument to Russian and Soviet soldiers who fell in Slovenia https://t.co/HCZA1RDkOU pic.twitter.com/iTXeE8MGO3

​"Keep in mind that many European countries are trying to remove monuments to Soviet soldiers. Slovenia on the other hand has recently unveiled a similar landmark. This is a bold step," Pilko observed.

Russian Duma Foreign Affairs Committee chairman Alexei Pushkov echoed these sentiments, saying that "not every Eastern European nation has been infected with the virus of Russophobia. Monuments to Russian soldiers have been destroyed in Poland. Slovenia has just erected one."

​The St. Vladimir church was built near the city of Kranjska Gor a century ago to honor more than 300 Russian soldiers who died in an avalanche during World War I while building a road for the Austro-Hungarian military in 1916.

The chapel is currently listed as a monument of culture and is protected by the state, while the adjacent territory has been transformed into a memorial park. The path from Kranjska Gora to the Vršič Pass has been renamed as the Russian Road.

© AP Photo / Danny Johnston
Russia Optimistically Eyes Expansion of Oil, Gas Export Deals With Slovenia
"We have gathered here because we care. We care about the Russian prisoners of war who were unfortunate to be buried under an avalanche one hundred years ago," Slovenian President Borut Pahor said during the ceremony. "We care about the victims of all wars."

However, common cultural heritage and shared history are not the only reasons that both countries are trying to improve relations. Counterterrorism efforts are another area of mutual interest.

In his speech, the Slovenian leader also warned that international terrorism has created security risks that could spark a major conflict. To prevent this from happening, he added, all nations must work together, a sentiment Vladimir Putin and other Russian officials have often reiterated.