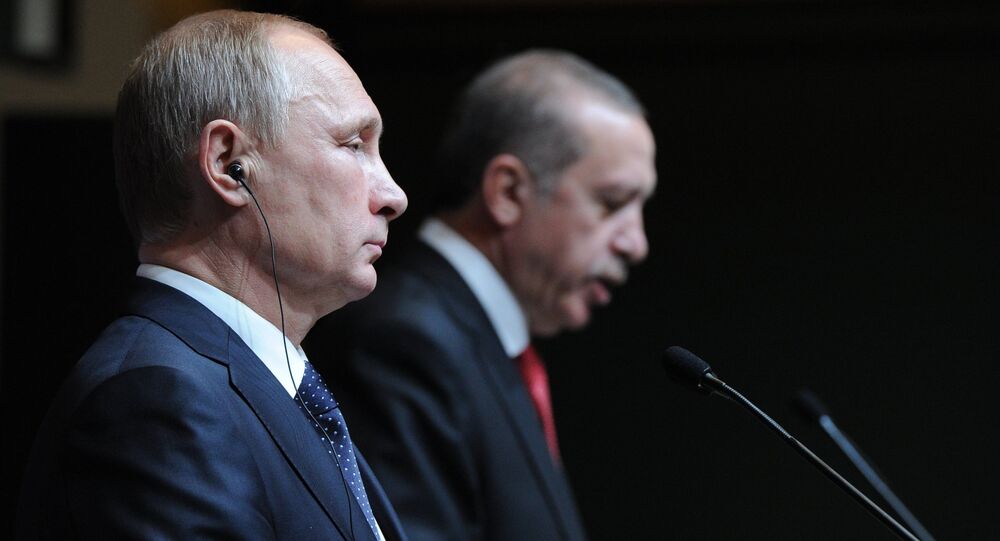 Next month, Russian President Vladimir Putin will hold a meeting with Turkish counterpart Recep Tayyip Erdogan. Kremlin spokesman Dmitri Peskov has confirmed that there will be "no shortage of topics" for discussion. But according to Russian analysts, Moscow's key interest will be to get Ankara to end its support for the terrorists in Syria.

On Tuesday, Peskov confirmed that Putin and Erdogan would meet in St. Petersburg on August 9. The presidential spokesperson added that he could not reveal what exactly would be on the agenda for the talks.

"As such, the agenda has not yet been discussed; there is an exchange of various proposals. This will be the first meeting for quite a long time, the first after the two leaders have managed to turn the page, so there will be no shortage of topics for discussion; we can say [that] with confidence," Peskov said, speaking to reporters.

Russian and Turkish political experts expect that negotiations will span an array of topics, from politics and economics to regional security. However, according to experts speaking to the independent Russian news and analysis website Svobodnaya Pressa, Turkey's support for terrorists in Syria is expected to be at the top of the agenda.

© REUTERS / Umit Bektas
Turkish Prime Minister Foresees More Developed Ankara-Moscow Relations
Russian Turkish relations, the online newspaper recalled, have seen a dramatic turnaround over the last half-year. "As recently as November 2015, when the Turkish Air Force shot down a Russian Su-24, the two countries were on the brink of war. This was followed by a long period of cooling relations and economic warfare, with Turkey carrying the main losses from the latter. Then Erdogan seemed to have delivered the apology required of him."

"Then," the paper noted, "just the other day, Turkish Foreign Minister Mevlut Cavusoglu thanked the Russian president for his support of the Turkish authorities during the coup attempt earlier this month. The Kremlin did not confirm the Turkish diplomat's statement. Nevertheless, Turkey is obviously set for a 'pro-Russian U-turn.' This is also evidenced by Turkish Economic Minister Nihat Zeybakchi's statement that 'political decisions have been made' on the Turkish Stream gas pipeline and the Akkuyu nuclear power plant projects, with the Russian and Turkish leaders' meetings expected to give the projects their 'final momentum' toward being realized."

Commenting on the very public talk of warming relations, Mikhail Alexandrov, a senior expert at the Center for Military-Political Studies at the prestigious Moscow State Institute of International Relations, explained that "Erdogan's behavior is only logical."

"He is in a difficult situation. Western countries organized a coup attempt against him which, fortunately, ended up failing. Now Erdogan has factually become isolated. He needs to destroy the pro-Western fifth column in the country; hence the large-scale purges in the army and among the civil service. The West, naturally, will not tolerate this, and pressure on Erdogan is growing…The Turkish president understands that he must look for some other point of support. Turkey may be a strong regional power, but it will be very difficult for it to survive on its own in today's world."

© REUTERS / REUTERS
Washington 'Counted on Military Coup in Turkey to Succeed'
"That," the expert suggested, "is why Erdogan is looking for closer ties with Russia, to find common ground – to use this rapprochement as an instrument of pressure on the West, to avoid anti-Turkish sanctions by the EU, etc."

Asked whether Moscow can trust the Turkish government's friendly gestures, Alexandrov emphasized that it is difficult judge at this moment whether Erdogan is sincere, or if he merely engaged in political maneuvering. According to the analyst, the key criteria for measuring his sincerity will come down to observing Turkey's future actions, particularly whether it continues to support Daesh (ISIL/ISIS) and the other terrorist groups operating in Syria.

"As far as Daesh is concerned, Turkey will have to give up its support of the terrorist organization" if it is serious about cooperation with Moscow. "Russia has a serious score to settle with this terrorist group…The Turkish border must be closed to Daesh if Erdogan wants to be friends with Russia. Of course, it's entirely possible that such an agreement is concluded only in oral form. Erdogan will probably reluctantly agree to such a step," the expert suggested.

© REUTERS / Sadettin Molla
Turkey Allowed Pilots to Shoot Down Planes Prior to Russian Su-24 Downing
"The question," according to Alexandrov, "is how Ankara would work to fulfill this agreement, given the fact that in practice, the implementation of such an agreement would almost certainly lead to a conflict with the United States…Only in practice will it be possible to check if Erdogan will dare to take such a step."

In exchange, the analyst noted, Russia could rescind its sanctions on Turkish agricultural projects, and agree to participate in some joint economic projects, including within the framework of the Eurasian Economic Union. "We could promise Turkey support for entry into the Shanghai Cooperation Organization, which would allow it to enter the Silk Road economic zone."

Ultimately, the analyst suggested, "it's important to understand that, on the one hand, [Erdogan's shift] opens up tremendous opportunities; on the other, it must always be remember that Erdogan will try to maneuver between Russia and the West to the end. Turkey will never change its geopolitical priorities; instead, it will attempt to use the conflict between East and West to defend its relatively independent position."

"If Erdogan does not carry through with the agreements signed with Putin [in St. Petersburg], nothing will prevent Moscow from not fulfilling its obligations. The Turkish leader must understand that it's time to focus on internal affairs – to come to an agreement with the Kurds; otherwise Turkey faces the threat of collapse."

© Sputnik / Alexey Kudenko
Ankara Again Eager to Build Turkish Stream Gas Pipeline With Moscow
For his part, Alexei Obraztsov, senior researcher at the Center for Asian and African Studies at the Higher School of Economics, offered a more pessimistic appraisal. "I would not expect any sensational decisions from this meeting," he noted.

"Perhaps some personal agreements will be reached about which we will learn in the future, if at all. In general, the visit was caused by the hasty but understandable desire by Turkey to restore relations with Russia. Apparently, in addition to diplomatic curtseys, the economy will be at the forefront of discussions. In connection with the worsening of relations with Russia, Turkey has faced huge economic losses, which have entailed serious social and political consequences."

Asked if Russia could demand that Erdogan halt his support for the jihadists in Syria, Obraztsov said that he believes a direct request to this effect is unlikely. "It's possible that some sort of 'comparison of notes' may take place – one of a kind which can be done only by the heads of state of two countries."

In short, much is riding on the Putin-Erdogan meeting, and the corresponding 'comparison of notes' between the two leaders; hopefully, the meeting will play a role in resolving the Syrian crisis, which has not only left the country in ruins, but has helped to destabilize the Middle East and even Europe, which continues to suffer from the consequences of the refugee crisis and radical Islamist terrorism.

Putin, Erdogan 'Turn the Page' Ahead of August 9 Meeting in St. Petersburg