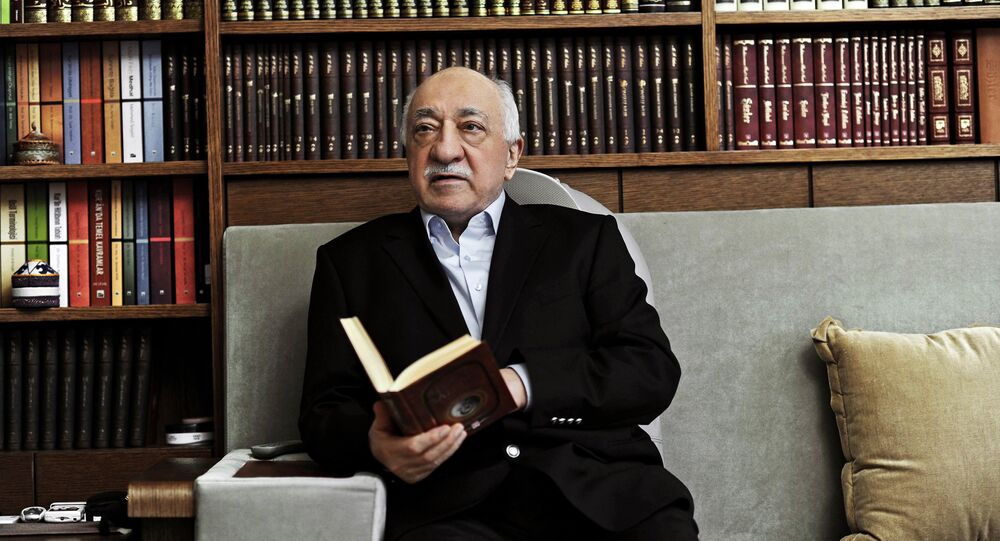 There is a lot of controversy over exiled cleric Fethullah Gulen's alleged role in the failed Turkish military coup. Why has Erdogan cracked down on his former political ally?

While Erdogan is blaming the recent failed coup attempt on Gulen and his followers, the latter is lambasting "Turkey's increasingly authoritarian president" for purges in the country.

What lies at the root of animosity between the two political figures?

Back in the 1960s Gulen had emerged as a promoter of the "Islamic Enlightenment" who called for reconciling religion with modernity and multi-party democracy.

According to Russian publicist Viktor Militarev, Gulen's teachings were a response to the secularism of the Kemalist Turkey.

In his article for Svobodnaya Pressa, Militarev pointed out that Gulen not only championed his beliefs as a Muslim preacher but, what is more important, created a wide network with thousands of members, involving Turkey's educational organizations, mass media outlets and businesses. But that was only the beginning.

© AFP 2021 / JIM WATSON
Chill in US-Turkish Relations May Signal Ankara's Shift Toward Moscow
"Founded in Turkey by the Muslim thinker Fethullah Gulen, the Gulen Movement aims to disseminate a 'moderate' interpretation of Islam through faith-based education," M. Hakan Yavuz, a professor of political science at the University of Utah, narrated in his book "Towards an Islamic Enlightenment: The Gulen Movement."

The organization established its schools and other institutions throughout Central Asia, the Balkans, as well as Western Europe and North America.

"Now, if the Gulenists had merely established schools, charities and nongovernmental organizations all over the world — which seems to be the case at first glance — then there would no problem," Mustafa Akyol, a columnist for Al-Monitor's Turkey Pulse and Hurriyet Daily News, remarked.

"However, as numerous events, anecdotes and journalistic reports show, the Gulenists also have a dark side: their covert organization within the state, a project that's been going on for decades with the aim of establishing bureaucratic control over the state," Akyol underscored.

Engdahl cited one of Gulen's secret sermons. In this sermon the Turkish cleric voiced his aspirations for creating an Islamist Turkey ruled by Sharia law.

"You must move in the arteries of the system without anyone noticing your existence until you reach all the power centers…until the conditions are ripe, they [the followers] must continue like this…You must wait for the time when you are complete and conditions are ripe, until we can shoulder the entire world and carry it…You must wait until such time as you have gotten all the state power, until you have brought to your side all the power of the constitutional institutions in Turkey," Gulen stated, as quoted by Engdahl.

© AP Photo / Chris Post
Over 72,000 Sign Petition to Extradite Turkish Cleric Gulen From US on White House Website
Thus unsurprisingly, in the late 1990s the Gulen movement attracted "the alarm and attention" of the secular Ankara government.

However, by the time the Turkish court charged him with treason in 2000, Gulen had already escaped and settled in the US.

Both Militarev and Engdahl name Gulen a pro-Western and pro-US politician with certain ties to the US Central Intelligence Agency (CIA).

Fethullah Gulen and Recep Tayyip Erdogan have a lot of in common. Like Fethullah Gulen, Erdogan was in opposition to a secular Kemalist government in Turkey. Both propagated the idea of the revival of Islam in Turkey and both were praising liberal market economy.

Furthermore, Erdogan's Justice and Development Party (AKP) has long been allied with the influential Gulen movement.

Militarev noted that the relations between the political figures had significantly deteriorated by 2010. According to the publicist, Gulen could have opposed Erdogan's rapprochement with the Muslim Brotherhood, a radical Islamist organization, and particularly with Mohamed Morsi, the fifth president of Egypt (2012-2013).

© AP Photo
Why Coup's Failure Portends Death Blow to Ataturk's Vision of Secular Turkey
Despite similarities in ideology, the AKP and the Gulen Movement entered into an open conflict in 2013, after the cleric denounced the Erdogan government's response to the Gezi Park protests.

In response, then prime minister Erdogan accused Gulen and his followers of trying to overthrow the democratically elected government. Since that time the Turkish leadership has kicked off a series of arrests among Gulen's sympathizers as well as those directly involved in the Gulen movement.

© AFP 2021 / ARIS MESSINIS
A Pro-Erdogan supporter holds an effigy of US based cleric Fetullah Gulen hanged by a noosed on during a rally at Taksim square in Istanbul on July 18, 2016

Although the controversy is still simmering over Gulen's alleged involvement in the recent failed military coup, Mustafa Akyol believes that the allegations are not groundless.

The journalist underscored that the West's skepticism regarding Gulen's role in the attempted coup is understandable:

"There are two likely reasons for this skepticism: Lately Erdogan has pumped out many fantastical conspiracy theories, as I have criticized repeatedly in Al-Monitor. Also, Erdogan's deepening authoritarianism rightly concerns people about Turkey, and many observers think that this is the main problem in the county," he wrote.

However, he noted that "the Gulenist problem is not just real, but lethal, as shown by the events of the past several days."

Over 9,300 People Under Investigation After Turkey Military Coup Attempt