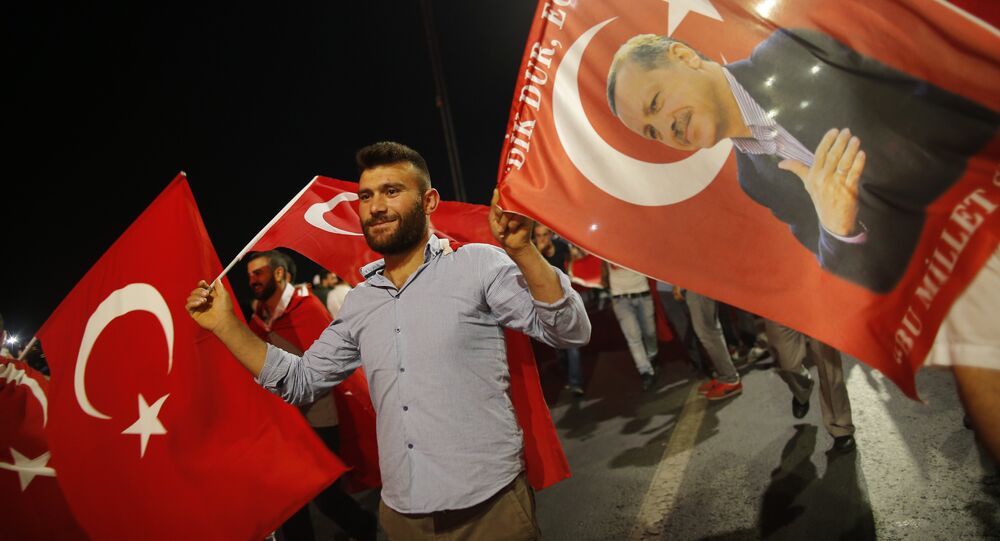 Was Erdogan Gearing Up for the Failed Military Coup?

The exact reasons why a group of midlevel military officers have failed to overthrow President Recep Tayyip Erdogan remain unclear. In an extensive analysis, Federico Pieraccini suggested that Turkey's strongman could have learned about the plot and used this information to influence the coup's outcome.

The analyst pointed to several major inconsistencies in the events that unfolded on July 15. Although he maintained that some in the military had a genuine intention to remove Erdogan, some facts leave room for questions.

For instance, coup plotters piloted four F-16 fighter jets over Ankara. Taking this into account, it's hard to explain "why the pilots did not try to at least intercept Erdogan's flight (the transponder was on all the time, the plane was visible on Flightradar)," Pieraccini observed.

© AP Photo / Hussein Malla
Turkish FM Grateful to Russia’s Putin for Full Support Against Coup
In addition, coup plotters launched attacks against the presidential palace in Bodrum, Erdogan's presidential residence in Ankara and the parliament, instead of trying to "neutralize" the president. The analyst referred to this as a "senseless use of force" that "makes no sense."

Clearly, it took a long time to prepare a coup, Pieraccini added. "It's safe to say that Erdogan probably discovered the initiative and perhaps used it to his own advantage (in what manner and how remains pure speculation at this time)."

Specific steps that those involved took on July 15 and the sheer fact that the coup failed have prompted the analyst to assume that some plotters decided not to take part in the coup at the eleventh hour.

"In all probability, someone pulled back at the last moment, sending out a small group, badly organized, unprepared and without adequate command structure or plan of action," he said. It might have been a "skillful maneuver" orchestrated by Erdogan himself he added. The president could have "started the coup and then let it fail," but it could have also been "a disagreement inside the military."

Pieraccini admits that there is ample room for speculation when it comes to the failed coup against Erdogan.

However, the analyst is confident that the United States or the CIA did not take part in what transpired in Turkey on July 15. If they were behind the coup, they would not have stopped, he added.

"A coup organized by the CIA resembles what we have sadly seen in Ukraine: death and the incessant chaos until the collapse of the nation," the analyst said. "Nothing comparable to what we saw in Istanbul or Ankara."

Turkish Airlines Fired Over 200 Employees for Violations, Support of Gulen