Germany has found itself between a rock and a hard place following the July 22 shooting in Munich as law enforcement and experts tried to determine whether Islamists or radical nationalists were behind the attack. Both versions are an "absolute nightmare" for Berlin, Albert Naryshkin wrote in an extensive analysis for PolitRussia.

Should local police and counterterrorism agencies have determined that the gunman was linked to or inspired by Daesh and the like, it would have "blown up the German society, particularly taking into account a recent axe rampage" in another Bavarian city, Würzburg, the blogger asserted.

On Monday, Riaz Khan Ahmadzai, a 17-year-old asylum-seeker from Afghanistan who was armed with an axe and a knife, left five passengers wounded on a commuter train. Daesh claimed responsibility for the attack. 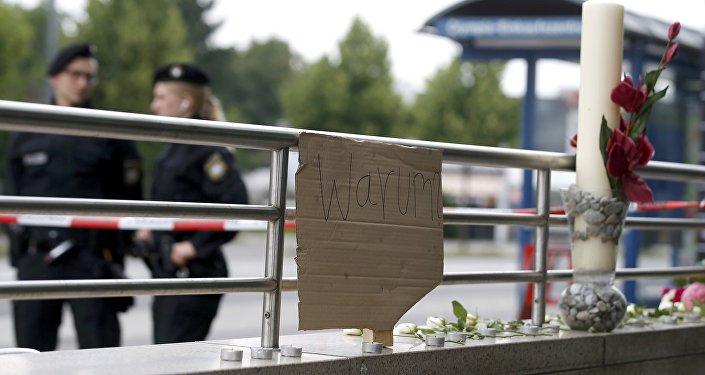 © REUTERS / Michael Dalder
German Newspaper Releases Photo of Munich Killer
The second attack that claimed the lives of ten people took place on Friday in Munich, the capital of Bavaria. The gunman was later identified as Ali David Sonboly, an 18-year-old with dual German and Iranian citizenship. Munich police said that the attacker was not linked to Daesh, a Mideast-based terrorist group that has inspired individuals to wreak havoc across the globe, including Europe.

Ali David Sonboly was apparently obsessed with mass killers like far-right extremist Anders Breivik, who murdered 77 people in twin attacks in Oslo and the island of Utøya on July 22, 2011.

"This means that the German society has already exploded and is producing active radicals, who have been enraged by [Chancellor Angela Merkel's] immigration policy, but are not fighting against it" through legitimate political means, Naryshkin noted.

© AFP 2019 / Tobias Schwartz
Munich Attack: Why Merkel Bearing the Brunt of Blame
Germany has been the top destination for refugees fleeing violence in the Middle East and Africa. In 2015, the country welcomed more than 1 million asylum seekers, but appears to have largely been unprepared to deal with the consequences.

This is why the second version, according to the analyst, spells considerably more trouble for German authorities since efforts aimed at tackling radicalism will "indeed deplete political resources of the ruling elite." Migrants are not going to go anywhere, he added. As a result this issue will continue to "fuel discontent and protest."

"Merkel has found herself in a very difficult position. Facing the threat of Islamic terrorism, she has also been stabbed in the back by radical nationalists. Acting together, these two forces could eradicate the federal government. [Their activities] could lead to unpredictable implications in Germany's domestic politics," the analyst added.

© AFP 2019 / Lukas Schulze / dpa
After Munich: What Needs to Be Done to Save Europe From Terrorist 'Chaos'
German nationalists and Eurosceptics will most likely pin the blame for recent attacks and any other migrant or terrorism related incidents on Merkel and Brussels' policies.

This will come at a time when the European integration project is going through one of the most acute crises in its history.  Rightwing sentiments have been on the rise for years. The UK's decision to leave the European Union has only made matters worse. Terrorism has become another major factor, particularly in the wake of high-profile attacks like the November 13 night of terror in Paris or the July 14 truck attack in the French city of Nice.

"Yet Merkel and Brussels have persistently ignored existing challenges" to the EU' wellbeing, Naryshkin observed.

This has also been visible with regard to the West's stance on Russia. High-ranking NATO officials and military commanders have repeatedly singled out Russia as posing the key threat to the alliance, surpassing or equal to the threat posed by global terrorism. Moscow has always insisted that it is not doing and will not do anything to undermine peace and security on the continent.

"Russia is genuinely interested in helping Europe since we do not want to see destabilized regions and terrorism hotbeds near our borders. There are already too many of these. Sadly, Brussels is far more interested in playing according to imaginary rules than taking a reality check and evaluating the real threat that has penetrated the European house and began to destroy it," the analyst concluded.