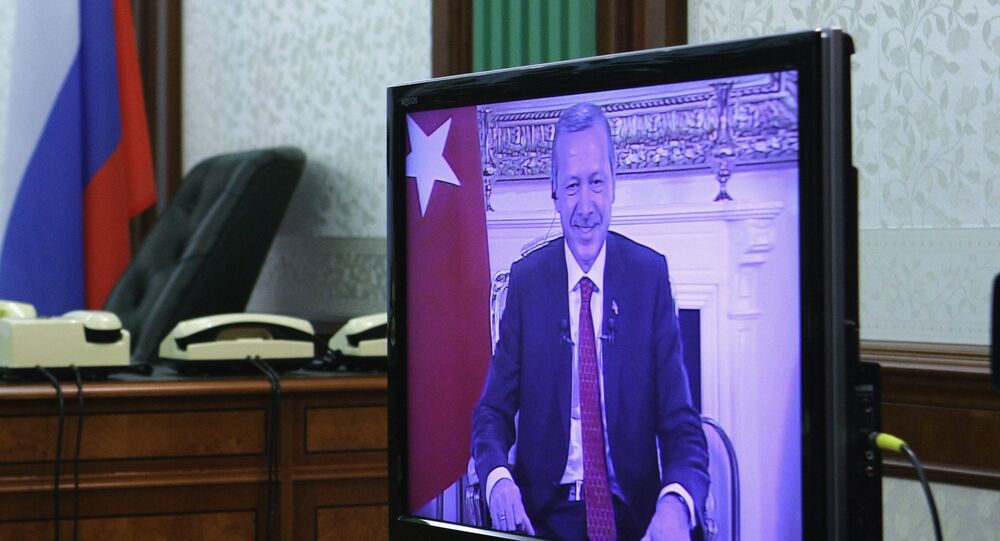 In a telephone conversation with Iranian President Hassan Rouhani on Tuesday, Turkish President Recep Tayyip Erdogan expressed his willingness to cooperate closely with Iran and Russia "to settle regional crises and restore peace and stability to the region." But what do Russian political analysts make of the Turkish leader's proposals?

As expected, the main topic of discussion between the Iranian and Turkish leaders during Tuesday's phone call was the failed military coup attempt that rocked Ankara on Friday night. Rouhani emphasized that Iran welcomed the return of stability in Turkey, and praised "the great maturity of the Turkish people, who showed during this coup attempt that strong-arm tactics have no place in our region."

© AFP 2020 / JIM WATSON
Chill in US-Turkish Relations May Signal Ankara's Shift Toward Moscow
But the two leaders also touched on the situation in the Middle East as a whole, and seem to have come to a consensus that there are global forces who are not satisfied with the idea of tranquility in the region. For his part, President Rouhani noted he has no doubt that together with the terrorists, there are also "some superpowers" trying to destabilize things.

Commenting on the conversation, Svobodnaya Pressa columnist Svetlana Gomzikova wrote that "it was not difficult to guess that Rouhani was referring to the United States, which has left quite a mark on the region over the last two decades."

"Perhaps even more surprising was the proposal by the Turkish president to establish a tripartite alliance consisting of Ankara, Tehran and Moscow," she added.

President Erdogan, she recalled, thanked Rouhani for his call and indicated that Turkey is "even more determined to work hand-in-hand with Iran and Russia to resolve regional issues and to strengthen our efforts to return peace and stability to the region."

"What was this?" Gomzikova asked. "Is the Turkish President really ready to cooperate with Iran, with which Ankara has always had serious disagreements, in spite of the US? Or has the vector of Erdogan's interests really changed following recent events? And in general, how can such an alliance change the regional picture in the context of the Syrian crisis?"

Tarasov, the director of the Middle East-Causasus Research Center, indicated that this may very well be a genuine attempt by Erdogan to try and shift his country's foreign policy vector.

The first inkling of that shift was witnessed before the coup, when Ankara initiated moves for a rapid rapprochement with both Israel and Russia.

"After that, a strange series of events occurred," Tarasov noted. "A terror attack struck the international airport in Istanbul. Then, information appeared about a planned meeting between Erdogan and the Russian president, possibly at the G20 forum in China. Then the schedule was changed, and suddenly, there was this incomprehensible and completely inconsistent coup attempt."

There are numerous versions regarding the coup, the analyst noted, including the one being pushed by Ankara that the rebelling officers had ties with Fethullah Gulen, the billionaire religious leader residing in self-imposed exile in the United States.

© AFP 2020 / Adem Altan
How Turkey's Mighty Military Turned Into a Shadow of Its Former Self
Until very recently, Tarasov noted, Erdogan's 'neo-Ottoman' policy had amounted to "trying to strengthen Turkey's regional influence 'on the wings of NATO'." That strategy would eventually end up failing spectacularly, with Ankara dragged into the regional conflict in Syria and Iraq, and facing the consequences, including two million refugees flooding into Turkey. "Then there's the Kurdish factor, and the fact that they are now supported in Syria by the Americans. Since then, the Kurds have also risen up in rebellion in southeast Turkey," posing a threat to Turkey's own territorial integrity.

Essentially, the analyst argued, it's likely that Erdogan "realized long ago that he had been trapped as a result of Western policy." As a result, "knowing that the Americans will not hand over Gulen, Erdogan is deliberately, for tactical reasons, provoking the aggravation of Turkish-US relations, in order to play the 'eastern card'."

"The Turks used a similar scenario when they sought to join the Shanghai Cooperation Organization," Tarasov recalled. "Turkey had received the status of a dialogue partner, and then Erdogan said that 'if Turkey was not accepted into the EU soon, it might join the SCO instead."

Now, the analyst noted, with Turkey's allies in the West hitting Erdogan with a barrage of criticism following the wave of repression that followed the coup, "he is beginning to build a kind of political alternative – giving him bargaining power with the West."

The central problem for Moscow, according to Tarasov, is that much of the Western policy establishment genuinely seems to support the fragmentation of the entire Middle East, Turkey included. For Russia, such a nightmare scenario would have disastrous consequences. "We would receive additional hotbeds of tension across our southern borders. In this scenario, Russia would find it impossible not to join a kind of alliance with Erdogan."

© Sputnik . Vladimir Vyatkin
Kremlin Unaware of Reports Claiming Russia Warned Turkey of Coup Attempt
Furthermore, the expert pointed out, if Ankara is genuinely considering the foreign policy U-turn that partnership with Moscow and Tehran would imply, "this means that on the Syrian track, Erdogan must recognize the authority of the Assad government, and negotiate in the appropriate format. This opens up the prospect of resolving the crisis in Syria."

As things stand, however, Turkey does not recognize Assad's legitimacy. In fact, Tarasov noted, given the harsh statements which continue to be made by Turkish authorities, even following the coup attempt, he had not seen "even a note of sympathy for the Syrian leader."

In any case, given a situation post-coup where Ankara faces pressures both inside and out, "it is entirely understandable that Ankara will be looking to create or join some tactical alliances. The government is trying to enlist the support of would-be allies who could act as a counterweight to the strained relations with the West."

Ultimately, the analyst noted, "it's difficult to say what will happen next. Next month Erdogan is scheduled to meet with Putin. Perhaps these issues will be worked out there. And then a certain clarity will appear. Personally, I get the impression that Turkey is genuinely trying to change its geopolitical orientation."

© AP Photo
Why Coup's Failure Portends Death Blow to Ataturk's Vision of Secular Turkey
For his part, Vladimir Yurtaev, a member of the European Society of Scholars of Iran, took note of the model of diplomacy involved in Ankara's proposal — featuring three partners.

"This so-called 'triangular diplomacy' has been found very productive by Tehran in particular. It was first implemented between Russia, India and China by [former Russian Prime Minister] Yevgeny Primakov [in the 1990s]. I refer to it as the 'Primakov triangle'. And the Iranians, more than any other country in the region, appreciate this approach very much, and use it to effect."

Ultimately, Yurtaev suggested that "with regard to how beneficial or useful such an alliance may be for Russia, I cannot judge. [However,] there is no historical precedent for such cooperation in the region" between these three countries.

If Ankara is serious, Moscow should seriously consider the offer, not least because it may help resolve the Syrian crisis, and provide Russia with a conditional voice within the NATO bloc, the analyst concluded.

There is a Russian saying, popularized by the legendary film White Sun of the Desert, saying that "the Orient is a delicate matter." Nowhere is this concept more relevant today than in Russia's diplomacy vis-à-vis Erdogan's Turkey.