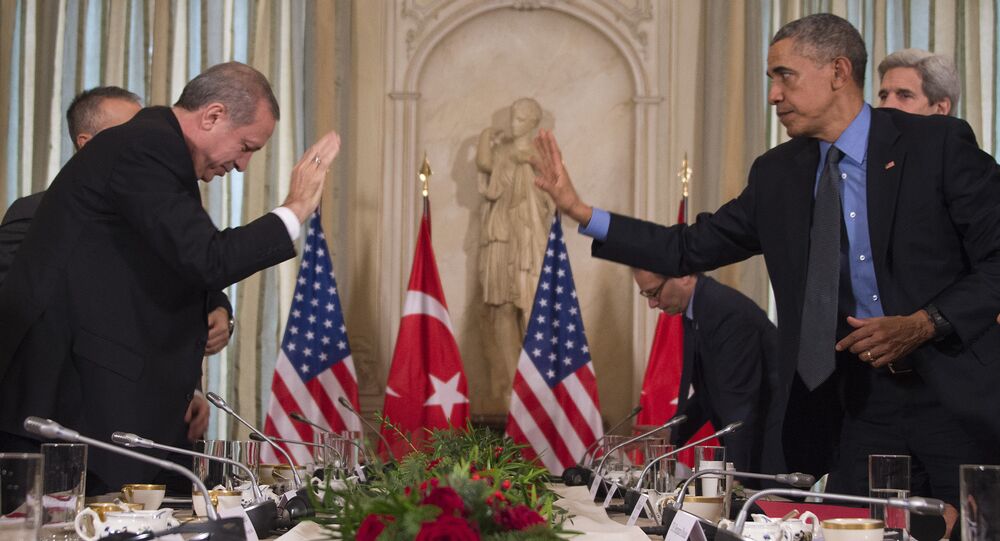 Signs of tensions growing between the US and Turkey continue to emerge, prompting some to question whether Ankara has reviewed its geopolitical priorities and made a shift from Washington toward Moscow.

Due to its unique geostrategic position, Turkey has long been important to the US as a NATO ally and a "bridge" between the West and the Arab world.

However, clouds are gathering on the horizon of US-Turkish relations after Friday's coup attempt.

"US Secretary of State [John] Kerry has not been able to take a firm stance against the failed Gulenist coup attempt, drawing heavy criticism in Turkey. He made another controversial statement yesterday that Turkey's NATO membership could be discussed depending on Ankara's future actions," Turkish media outlet Daily Sabah reported Tuesday.

© REUTERS / Kayhan Ozer/Presidential Palace
Merkel on the Horns of a Dilemma After Failed Coup Attempt in Turkey
Following the attempted coup, Ankara urged Washington to extradite cleric Fethullah Gulen, believed to be the mastermind behind the coup attempt. Gulen has been living in Pennsylvania since 1999.

Furthermore, Turkish Labor Minister Suleyman Soylu assumed that the US could have had a hand in the failed coup attempt, after Washington requested evidence to confirm Gulen's role in the uprising.

Turkish Prime Minister Binali Yildirim stated Monday that "Turkey may question its friendship with the US" should Ankara's demands to extradite the cleric not be met.

"We will be a little bit disappointed if our friends say 'show us the evidence' while there are members of this organization which is trying to destroy a state and a person who instructs it," Yildirim said, as quoted by Hurriyet Daily News.

Meanwhile, in response to a series of arrests targeting Turkish military and civil service personnel, Kerry and his European counterparts called upon Recep Tayyip Erdogan to respect the rule of law and democratic principles. They warned Ankara that its actions may contradict EU and NATO membership requirements.

"Any erosion of democracy in Turkey, a key US ally in the fight against the Islamic State (Daesh) and a North Atlantic Treaty Organization member, complicates some of the most critical tests facing President Barack Obama in his final months in office and his successor thereafter. Turkey's strategic location and Western ties have made it a cornerstone of US strategy against the Islamic State as well as efforts to resolve the Syrian conflict and stem the flow of migrants to Europe," Carol E. Lee of the Wall Street Journal wrote Sunday.

© REUTERS / Murad Sezer
Over 9,300 People Under Investigation After Turkey Military Coup Attempt
"Concerns have been building for some time in the White House and on Capitol Hill about Mr. Erdogan's intensifying crackdown on dissent… Uncertainty about Turkey's direction comes on top of a host of crises Mr. Obama's successor was already set to inherit in the Middle East and North Africa," Lee underscored.

In his interview with Russia's online newspaper Izvestia.ru, Stanislav Tarasov, Director of the Information-Analytical Center "The Middle East — the Caucasus", suggested that the request to extradite Gulen and the arrest of two pilots involved in shooting down the Russian Su-24 back in November 2015 in Syria signals Ankara's intention to distance itself from the US and become closer with Russia.

"Recep Tayyip Erdogan is using Gulen to cool its relationship with Washington. By doing this, he is trying to strengthen ties with Russia, Iran, Azerbaijan and Kazakhstan and [he] is openly blackmailing the West. The problem is that it would be very hard for Turkey to break its dependence on the US, the EU and NATO since the ties [between Turkey and these entities] are very strong. In addition, in response to the Turkish leader's bid for independence, the West can impose sanctions on Turkey, dealing a blow to the country's economy, or to play the Kurdish card, using the Kurdistan Workers' Party (PKK). That means [Erdogan] may face a serious geopolitical challenge," Tarasov told Izvestia.ru

© AFP 2020 / IBRAHIM USTA / POOL
Turkey Begins Shifting Position on Syria, Faces Coup Attempt…Coincidence?
There are signs showing that Erdogan is indeed seeking closer cooperation with Russia and Iran. After apologizing for the death of the Russian pilot shot down by the Turkish F-16 jet, Erdogan continues to build bridges with Moscow.

During his recent phone call with Iran's President Hassan Rouhani on Tuesday, Erdogan vowed his commitment to work with Tehran and Moscow to settle regional crises.

"President Erdogan thanked President Rouhani for his phone call and said everything is in a normal state at present. He said the Turkish nation will pursue its goals in even a more determined manner now. He said his country is firmly willing to work with Iran and Russia to settle regional crises and restore peace and stability to the region," the Iranian media outlet IRNA reported Tuesday.

On Wednesday Kremlin spokesman Dmitry Peskov revealed that a meeting between Russian President Vladimir Putin and Turkish President Recep Tayyip Erdogan will take place in the first 10 days of August.

"A meeting between Putin and Erdogan is currently being prepared and elaborated via diplomatic channels. We agreed that this meeting would take place in the first 10 days of August, it will take place in Russia; the city and the exact date are still being clarified," Peskov told reporters.

How Turkey’s Approach Toward Syria Destroyed Its Foreign Policy