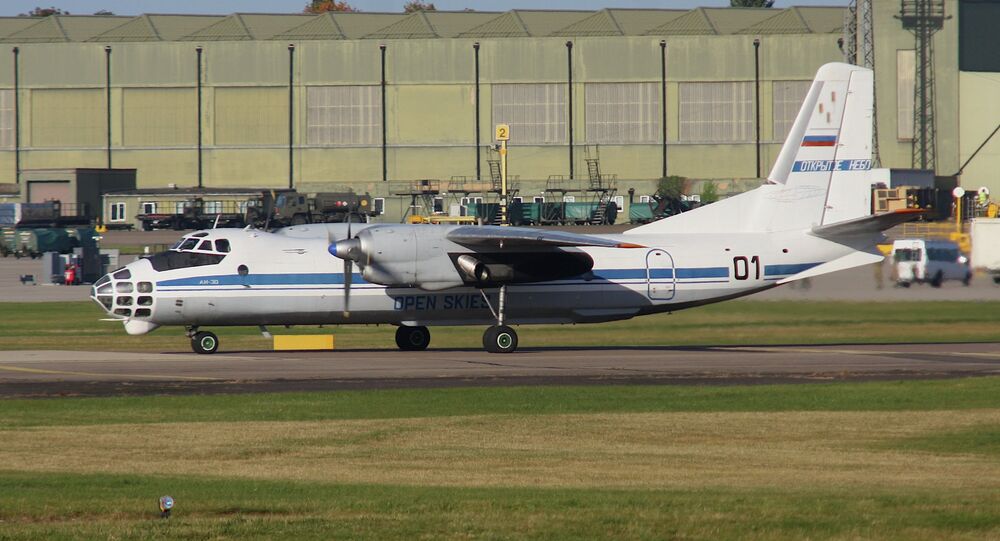 This week, American and Ukrainian pilots began a joint observation flight over Russian territory under the Treaty on Open Skies. Speaking to one of Russia's leading independent online news and analysis portals, military analyst Yuri Kotov explained what Russia stands to gain by adhering to the treaty.

On Monday, Russian Defense Ministry Nuclear Risk Reduction Center head Sergei Ryzhkov told reporters that a joint US-Ukrainian mission would be performing a flight over Russian territory in a US Boeing OC-135B observation aircraft from July 18 to 23. In response, Russian observers are flying over German territory in an Antonov An-30B aerial reconnaissance aircraft between July 18 and 22.

© Sputnik / Vitaliy Ankov
US, Ukrainian, Russian Pilots to Fly Over Russia, Germany Under New Treaty
The specially-equipped observation planes, neither fitted with onboard weaponry, have passed the necessary certification according to the 1992 treaty. Russian specialists will be present onboard the American plane, with German specialists onboard the Russian aircraft. This setup is aimed at ensuring strict control over the use of surveillance equipment, Kotov explained.

The Treaty on Open Skies was signed in March 1992, becoming one of the major confidence-building measures in Europe following the Cold War. Entering into force on January 1, 2002, the treaty is observed by 34 states, including Russia and most members of the North Atlantic Alliance.

Commenting on the news, Svobodnaya Pressa columnist Svetlana Gomzikova recalled that "the purpose of this treaty, formally, is virtuous, and aimed at strengthening mutual understanding and trust between countries. Above all, it allows countries to track the movement of troops, to openly gather information on armed forces on the territory of the treaty countries."

"But do we need such openness today?" the journalist asked. "There were many declarations made in the 1990s, including a promise by NATO that the alliance would not advance one inch to the East [past Germany]. And where is NATO now? On our borders." In this light, the journalist asked, "what kind of open skies can we speak of given these conditions? Is it time perhaps to withdraw from the treaty?"

© Sputnik / Maksim Bogodvid
Russia First to Adopt Digital Cameras on Open Skies Flights
Speaking to the newspaper, Yuri Knutov, military analyst and director of the Air Defenses Forces Museum outside Moscow, explained what the treaty was about, and exactly what Russia stands to gain from continuing to honor the treaty.

According to the expert, Russia has little to gain from withdrawing from the treaty and, on the contrary, its role in assuring effective monitoring of the NATO countries' militaries makes the treaty "simply vital."

"Withdrawing from the treaty generally offers little benefit; today reconnaissance satellites allow for successful monitoring of the movement of troops. Planes make it easier; their lower altitude allows for more detailed observation. With help of planes, it's possible to clarify data received from space surveillance.  In other words, it's possible to see what can be concealed more thoroughly from satellites."

On the other hand, Knutov also emphasized that "it's still impossible to hide a mass movement of troops from satellite reconnaissance."

What's more, the analyst explained that for Moscow, participation in the Treaty on Open Skies is necessary more from the perspective of international law, not the treaty's military implications.

From this perspective, the expert suggested, "a withdrawal from the treaty would be akin to violating the requirements of international law, and this is unacceptable. We must on the contrary do everything in our power to ensure that all agreements are adhered to. Only in this way will it be possible to ensure international stability."

Effectively, Knutov noted, "when these flights are carried out, it's a good thing. It was a bad thing when Turkey, for example, prohibits us from doing so." In February, at the height of Russian-Turkish tensions, Ankara refused to grant Moscow permission for an observation flight over the Turkish-Syrian border, a direct violation of the treaty.

Therefore, the analyst suggested that the present crisis in NATO-Russia relations is all the more reason to continue the overflights.

Following the NATO summit in Warsaw earlier this month, the alliance agreed to the deployment of four battalions in Poland and the Baltic states. Before that, NATO carried out a series of mass exercises across Eastern Europe, which also saw the transfer of heavy equipment, including armored vehicles, tanks and artillery, to the region.

© AFP 2021 / JANEK SKARZYNSKI
US troops land with parachutes at the military compound near Torun, central Poland, on June 7, 2016, as part of the NATO Anaconda-16 military exercise

At the same time, Knutov recalled, US Defense Secretary Ash Carter issued a directive recently on the creation of a 40,000-strong rapid deployment force, capable of deploying anywhere in Europe within 48 hours. "Now imagine these 40,000 troops being moved to those areas where military equipment has already been deployed," the expert commented.

"In reality, after the decisions made at the Warsaw Summit are implemented, our borders will see the deployment of 150,000 NATO troops, not four battalions," the analyst emphasized. "Together with the Polish army, they will be able to capture Kaliningrad within several days…Therefore, observation flights will allow us to keep track of several things. In addition to satellites, our aircraft will help to see where this NATO infrastructure is being built up, where and what is being built. This is very important for us."

© Flickr / Commander, U.S. Naval Forces Europe-Africa/U
Ukraine’s Ill-Preparedness Halts Naval Phase of US-Led NATO Drills - Source
Ultimately, Knutov noted, so long as Russian observers do not face any limitations regarding which countries they fly to, and which flight paths they allowed to observe, it will remain beneficial for Russia to observe the treaty.

Asked whether Ukraine, which has repeatedly made outlandish claims about Russian troops fighting in the country's war-torn region of Donbass, will finally be made to feel at ease following the joint US-Ukrainian flight, the analyst said it was doubtful, since Kiev's rhetoric has always been made with political purposes in mind.

"Kiev understands the situation perfectly well. There are thirty thousand Russian soldiers along our western borders, from Arkhangelsk in the north to Crimea in the south. On the Ukrainian side, there are 150,000. Is there a difference? In other words, we cannot threaten anyone with these troop levels. The Americans and NATO know these numbers, and so do Ukraine's leaders. Meanwhile, what they say in relation to Russia is a shameless lie – designed to get certain preferences from NATO – to get weapons and unleash a war with Russia."

US, Canada to Hold Observation Flight Over Russia