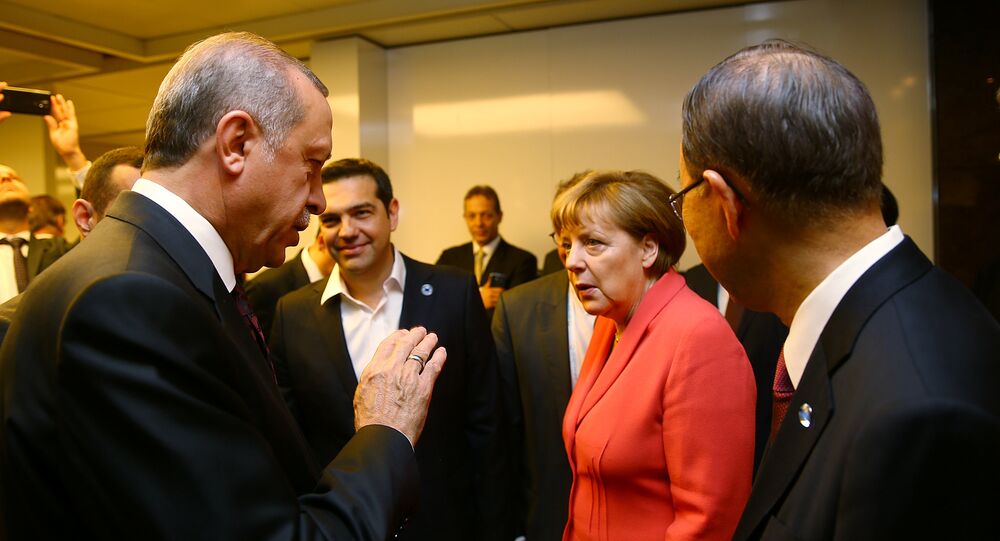 German Chancellor Angela Merkel faces a serious dilemma following Friday's coup attempt in Turkey: Turkish President Erdogan has stated that he may reinstate the death penalty if the Turkish people and the parliament demand it. The measure contradicts the EU's core principles regarding human rights.

More than any other European political leader, Merkel has tied her political fate to Erdogan, Norwegian journalist Per Kristian Haugen of Aftenposten stresses.

He draws attention to the fact that Merkel's reaction to the wave of arrests of Turkish servicemen as well as the dismissal of civil servants in Turkey has demonstrated that concerns are growing in Berlin.

© REUTERS / Yagiz Karahan
Post-Coup Turkey in Danger Unless Erdogan Seeks Consensus Within Country– Cypriot Lawmaker
Hurriyet Daily News reported Tuesday that Ankara does not rule out death penalty for those suspected of plotting against the Turkish government.

"Turkish people have made it clear they want death for the 'terrorists' who plotted the coup," Erdogan told Becky Anderson of CNN, as quoted by the media outlet.

"The people now have the idea, after so many terrorist incidents, that these terrorists should be killed. That's where they are, they don't see any other outcome to it… 'Why should I keep them and feed them in prisons, for years to come?' That's what the people say," the Turkish president underscored.

It is worth mentioning that Ankara completely abolished capital punishment in 2004 as part of the human rights reforms it launched in order to satisfy EU membership requirements.

Angela Merkel responded to Erdogan by urging that "he abide by rule of law in response to the recent attempted military coup," during her Monday phone call with the Turkish leader, Deutsche Welle highlighted.

© REUTERS / Murad Sezer
Over 9,300 People Under Investigation After Turkey Military Coup Attempt
Furthermore, the German Chancellor stressed that the reintroduction of capital punishment would be "in no way compatible with the goal of EU membership." She reminded Erdogan that by inking Protocol 13 of the European Convention on Human Rights, Ankara had vowed its commitment to abolish the death penalty in the country.

"The death penalty is not compatible with European principles," Steinmeier told a press conference Monday.

The question remains open whether Erdogan will follow Merkel's recommendation. According to Haugen, Merkel is one of only several European politicians whom Erdogan listens to. The journalist also points to the fact that Germany and Turkey have historically close political and economic ties. Moreover, Germany's Turkish community is its largest ethnic minority.

"I predict that we won't have regulations [facilitating] visa-free travel before the end of the year," said Oettinger, as quoted by the media outlet.

In accordance with the deal, Brussels vowed to provide €6 billion ($6.6 billion) in aid to Turkey, as well as to revive EU accession talks and grant Turks visa free travel in Europe. In exchange, Ankara pledged to keep millions of asylum seekers on its territory, preventing a massive flow of refugees from coming into the EU.

Ankara has repeatedly warned the European Commission that it would reopen the "Balkan route" across the Aegean if the EU fails to accomplish its part of the deal.

"This deal is already under strain," Geoffrey Smith of Fortune writes, "With the restoration of the death penalty, Erdogan would be widening the rift with the EU on that score."

The journalist assumes that if the EU decides "to stand its principles," it may face a new phase of the refugee crisis.

Since it is Germany which bears most of the burden of the EU refugee crisis, Angela Merkel's deep concerns regarding Turkish domestic affairs are not groundless.