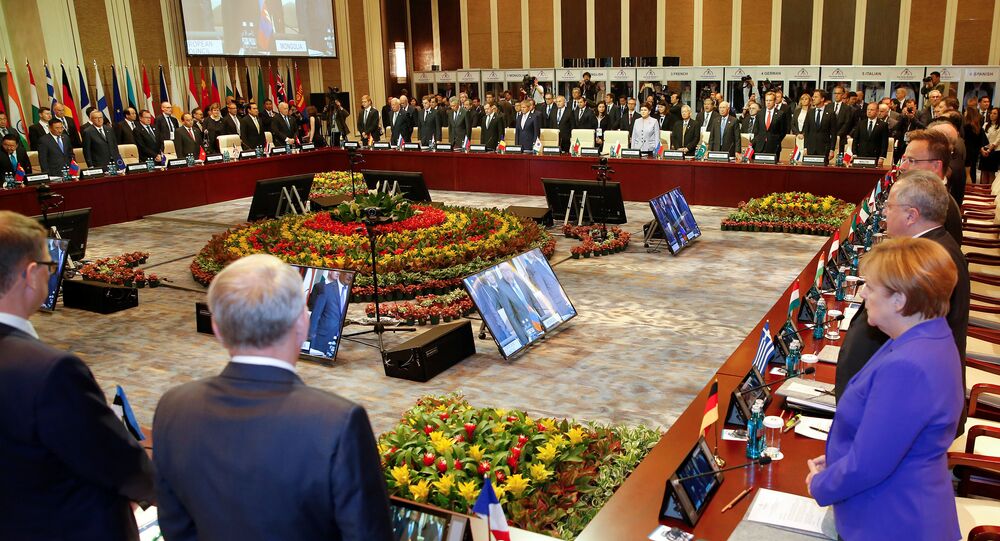 As the 11th Asia-Europe Meeting (ASEM) summit concludes, world leaders are leaving the Mongolian capital shocked by the events in France and Turkey and pledging to come closer together in the face of unstable times.

ULAANBAATAR (Sputnik), Anastasia Levchenko — The biennial summit, which brought together top EU officials, heads of state and governments of 30 European states and 20 Asian partners, lasted for two days. Both days were marked by tragic events abroad that shocked all the leaders present in Ulaanbaatar.

© REUTERS / Tumay Berkin
Some 90 Dead, Over 1,150 Wounded After Turkish Military Coup Attempt
On Thursday, a deadly truck attack in the French city of Nice killed at least 80 people, injuring dozens of others. On Friday, the failed military coup attempt in Turkey took lives of at least 90 people, and the events continue to evolve.

As the European Council President Donald Tusk said, the summit has become unforgettable not only for the exotic culture of Mongolia that the participants got to know closer, but also, sadly, for the shocking events in France and Turkey.

These developments largely influenced the agenda of the summit, bringing the enhancement of security cooperation to the fore.

In the final Ulaanbaatar Declaration adopted as a result of the summit and in the Chair’s Statement, participants agreed to give a boost to their collaboration on security matters.

“Leaders exchanged views on the ways to promote and strengthen cooperation on international and regional issues of common interest and concern including in the Middle East, Africa, Ukraine, and recent developments on the Korean Peninsula and human rights situation concerning the DPRK,” the Chair’s Statement reads.

As for countering terrorism after the recent attacks, the leaders “condemned all forms of incitement to hatred and intolerance, including xenophobia, religious hatred and violence.”

They also acknowledged that the practice of moderation is highly effective in bridging differences and overcoming extremism.

“In this regard, they urged Governments to strengthen initiatives on the matter and expressed support for efforts aimed at promoting moderation, in particular as espoused by the Global Movement of Moderates in various formats within the ASEM framework,” the Chair’s Statement reads.

As for North Korea’s nuclear program, the leaders stressed the need for the reduction of tension and resumption of the Six-Party Talks. They also called for vigilance against nuclear and missile-related procurement by North Korea and against any other assistance to its nuclear program.

Given the attendance of the summit by top officials from Eastern and Southeastern Asian countries, there has been an intrigue whether the issue of the South China Sea dispute will be addressed.

On Tuesday, the ruling by the Permanent Court of Arbitration in The Hague invalidated Beijing's claims to much of the South China Sea, which are embodied in a "nine-dash line" that dates from 1940s maps and stretches close to other countries' coasts.

© Sputnik / Yekaterina Shtukina
ASEM Members Agree to Foster Cooperation on Security, Migration, Climate
A number of disputed islands, including the Paracel Islands and the Spratly Islands, are located in the South China Sea. Beijing’s territorial claims include the Spratly Islands, known as Nansha Islands in China, which are believed to be rich in oil and gas reserves.

China’s claims run against those of the Philippines, Taiwan, Malaysia, Brunei and Vietnam.

The issue might have been raised indirectly, but it was not neither discussed in details, nor included in one of the final documents adopted at the ASEM summit due to Beijing's reluctance.

"Still, it is not so easy to agree with our Chinese partners on this issue. But these talks are promising," Tusk told reporters.

Indirectly, the issue is touched upon in the final Chair's Statement.

"Leaders reaffirmed their commitment to ensure peace, stability and prosperity and to promote maritime security, safety and cooperation, freedom of navigation and overflight and unimpeded commerce… in full compliance with the principles of international law… Leaders agreed on the critical importance… of disputes being resolved in accordance with the principles of international law," the statement reads.

The next ASEM leaders summit will take place Brussels, Belgium, in 2018. Prior to that, Myanmar will host the meeting of ASEM foreign ministers in the second half of 2017 in Nay Pyi Taw.

The ASEM forum was established in 1996 with the aim of deepening relations between Asia and Europe at all levels. The forum's partners currently include 53 states from all over the world.

Airspace in North-West of Turkey Closed to Civil Aviation - Reports

Mastermind of Airstrike on Turkish Hotel Where Erdogan Stayed Hospitalized