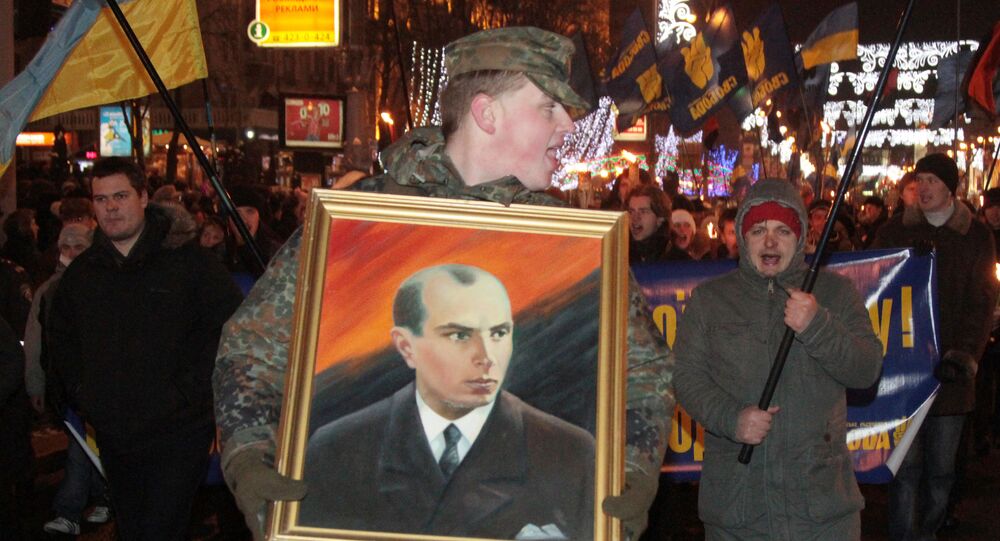 Last week, Kiev's City Council renamed Moskovsky Prospket (Moscow Avenue) in honor of WWII-era Nazi collaborator Stephan Bandera. The move, seen as an insult to the millions of Ukrainians and Russians who fought against Bandera's militants, also shocked many in Poland, traditionally one of Kiev's staunchest allies against Moscow.

Last Thursday, officials in Ukraine's capital agreed to rename Moscow Avenue in honor of Bandera, whose OUN-UPA paramilitaries conducted a horrific campaign of ethnic cleansing in areas under their control against Polish, Jewish, Russian, and anti-fascist Ukrainians during the Second World War. Historians have estimated that the campaign against the Poles alone resulted in the deaths of between 80,000 and 120,000 people, mostly women and children, between 1943 and 1944.

A Kiev street has been named after nationalist leader Stepan Bandera. He wasn't a nice man: https://t.co/GI6IWthdTG pic.twitter.com/18ay2ZibvW

​Predictably, the City Council's decision was roundly criticized by the Russian media, already weary of post-Maidan Ukraine's efforts to whitewash the UPA's crimes. Bandera's estimated 100,000 fighters, Russian commentators recalled, would be considered war criminals not only by Russian veterans, but also by the 6 million Ukrainians who served in the Red Army during the Second World War.

Moreover, while much of the Western press has stayed silent on the news, the Israeli media did not. Bandera, The Times of Israel pointed out, urged ethnic Ukrainians to "destroy" Poles and Jews, as well as other minorities.

Perhaps more importantly, Ukrainian authorities' glorification of Bandera has also irked many in Poland. Warsaw had previously reserved much of its criticism for Kiev, particularly in the aftermath of the February 2014 Maidan coup. The country's authorities were among Kiev's main supporters, and supported its goals of joining the European Union and NATO.

However, Poles' patience for Kiev's frenzied effort to rewrite history, and to portray Bandera and his paramilitaries as heroes struggling for independence, appears to be running out.

© Flickr / Lukas Plewnia
Polish Senate Adopts Bill Recognizing Volhynia Massacre as Genocide, Declaring July 11 Remembrance Day
Last Thursday, the same day that Kiev renamed one of its central streets Bandera Avenue, the Polish Senate debated, and apparently passed, a bill classifying the massacre of Poles in Volhynia and Eastern Galicia as genocide. Importantly, the resolution was supported by members of the ruling Law & Justice Party, which has in the past maintained a hardline anti-Russian stance and supported Kiev's post-Yanukovych government.

In a recent article for Visegrad Insight, Polish-American journalist Filip Mazurczak tried to explain exactly why the Ukrainian government's continued denial of responsibility for UPA's genocidal actions has had a poisonous effect on the country's identity, and its prospects for joining Western institutions.

Mazurczak recalled that after the collapse of the Soviet Union in 1991, war-era divisions began to reemerge in Ukrainian society on whether to classify the UPA and Bandera as 'freedom fighters' or war criminals. "In the eastern half of the country, the UPA and Bandera are overwhelmingly considered to be fascist scum. In the west, however, many see them as heroes."

At the same time, the journalist added that while Ukraine's present authorities are certainly Bandera's loudest cheerleaders, they weren't the ones who set in motion his official glorification.

"Viktor Yushchenko, Ukraine's president in 2005-2010, bestowed the highest state honor upon Bandera. His successor, Viktor Yanukovych, stripped him of it. Under Petro Poroshenko, president since 2014, UPA and Bandera are again national emblems. Poroshenko has repeatedly praised UPA for fighting for Ukrainian independence, and [for] its 'heroism', and has made the anniversary of the foundation of UPA a national holiday. The Ukrainian parliament has [even] ratified a bill that criminalizes criticizing UPA." This was topped off by renaming a street in Kiev in Bandera's honor.

© Photo : Sgt. 1st Class Whitney Hughes
No More Maidans: NATO Training Ukrainian Troops to Crush Future Protests
That's where the Poles come in. Mazurczak recalled that after joining NATO and the EU, "a key aspect of Poland's foreign policy has been bringing Ukraine and other former Soviet republics into these structures." Accordingly, Poland's liberal nationalist Civic Platform Party, which was in power between 2007-2015, repeatedly blocked parliamentary resolutions classifying UPA's actions as genocidal, "claiming that this would worsen Polish-Ukrainian relations," and thus threaten Polish strategic interests.

However, that all began to change last year. The Law and Justice Party, which came to power in presidential and parliamentary elections last spring and fall, is divided on matter, as is the Polish press. "For example," Mazurczak noted, the right-wing Gazeta Polska fired Father Tadeusz Isakowicz-Zaleski, a Catholic priest and Solidarity veteran who had been a columnist for the paper, after he wrote an article criticizing Maidan protesters for glorifying UPA. Meanwhile, Adam Szostkiewicz of the leftist publication Polityka has written that the Ukrainians need UPA and Bandera because every nation needs mythology."

Effectively, while the government and society are yet to reach a consolidated position, Ukrainian authorities' refusal to back down from efforts to glorify its WWII-era war criminals have led to cracks in the much-vaunted partnership between Warsaw and Kiev.

At the same time, Mazurczak suggested, while "some Ukrainians have tried to make amends…these attempts smack of apologetics." For instance, in a recent open letter to Poland by Ukrainian intellectuals, politicians and religious figures, Poles were asked to forgive the Ukrainians for the sins of the past. "However, the words 'UPA' and 'genocide' never appear; instead, the letter euphemistically refers to the 'Volhynia tragedy'."

© REUTERS / Gleb Garanich
Better Late Than Never: Italian TV Relays Plight of Donbass From Standpoint of Residents
Even worse, the journalist noted, some contemporary Ukrainian historians even go far as to suggest that the 1943 genocide was actually "part of a convoluted Polish-Ukrainian conflict, with the same level of wrongdoing on both sides."

Ultimately, Mazurczak insisted, "in the long run, not acknowledging the events of 1943 as genocide will have negative consequences for not only Poles, but for Ukraine as well." Specifically, the journalist noted, as Ukrainian migration to Poland continues to grow (with an estimated one million Ukrainians already in Poland), the lack of an apology may result in growing ethnic tensions.

Moreover, he added, while recent polling "shows that Ukrainians like Poland more than any other foreign country, this is unrequited love. Many Poles harbor grievances against the Ukrainians for 1943."

That, the journalist noted, is in stark contrast to Poland's attitudes toward the Germans, who were also responsible for many wartime crimes. "This," Mazurczak noted, "is largely because the Germans have apologized for atrocities against the Poles, starting with Willy Brandt's 1970 visit to Warsaw."

© Flickr / Steve Calcott
Kiev Ignores UN Appeals to Investigate Maidan, Odessa Massacres
Ukraine, in the journalist's view, would be well-served to do the same, not only for the sake of Polish-Ukrainian relations, but also because failing to do so will limit Kiev's chances of joining 'the West'. Effectively, Mazurczak suggested, "only an objective evaluation of a nation's past, both its achievements and its failings, can make it stronger."

Unfortunately, what the analyst doesn't want to admit is that post-Maidan's very identity has been built on the glorification of Bandera and his fighters. From the first Molotov cocktails thrown by nationalist protesters in Kiev in the winter of 2014, to the cropping up of neo-fascist 'volunteer battalions' across the country after the victory of the coup, to the use of these same forces in the destructive civil war in Ukraine's east, the Bandera brand of nationalism has been use to effectively forge the country's post-Maidan national identity. If this component is removed, the whole Maidan project may fall apart.

The question Poles will have to ask themselves is whether geopolitics (i.e. Kiev's push to join Western institutions) trumps historical justice and historical memory.