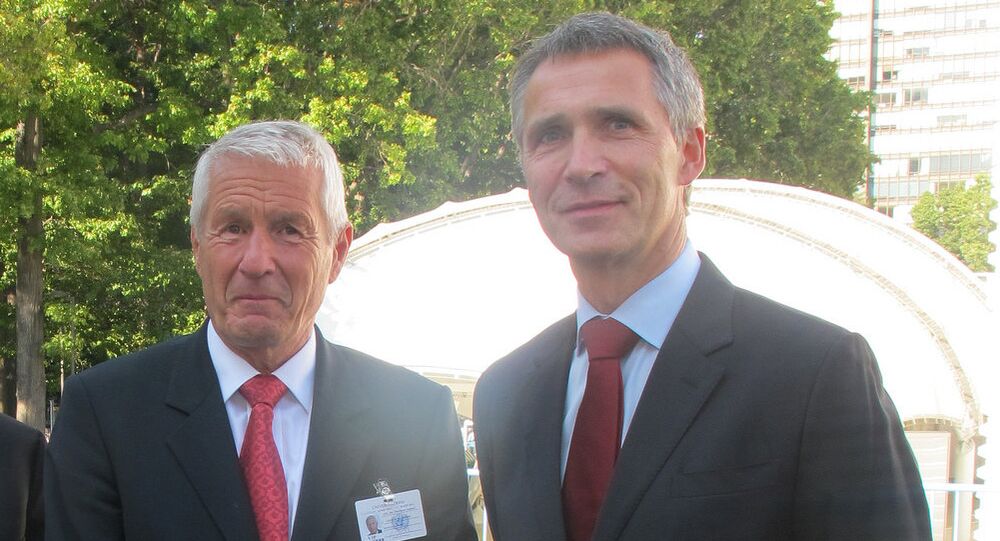 As the Chilcot report, which unveiled the flaws and blemishes of the UK's decision to support the US invasion of Iraq, left Great Britain baffled, former Norwegian Prime Minister and current NATO Secretary General Jens Stoltenberg may find himself in the same hot water for bombing Libya as Tony Blair did for his Iraqi escapade.

© AFP 2021 / Stefan Rousseau
Blair 'Almost Semi-Broken' in Wake of Iraq, Libya Legacies
Parallels were recently drawn between the US-Led invasion of Iraq and NATO's intervention in Libya. What's more surprising is who suggested them: none other than Thorbjørn Jagland, Secretary General of the Council of Europe. Jagland's excitement over the amount of reproach expressed by the investigating committee headed by John Chilcot towards former British Prime Minister Tony Blair cannot be concealed.

"If the Iraqi war was illegal, which is what Kofi Annan says, what about the bombing of Libya, which went far beyond the UN Security Council mandate?" Jagland asked on Facebook.

The US and Britain went to war in Iraq with the single intention of toppling President Saddam Hussein, which was done without any approval from the UN Security Council. France voted against it, and Russian President Putin called the proposed US-led invasion a "big political mistake." In 2003, the war was justified with "credible" intelligence information, according to which Iraqi had stockpiles of weapons of mass destruction. However, none of the promised weapons were found in the subsequent free-for-all, and Iraq has plunged further into terrorist chaos and sectarian violence.

© REUTERS / Joshua Lott/Files
Norway Oils Clinton's Wheels Despite Internal Criticism
In the spring of 2011, NATO unleashed an assault against Libya under the pretext that the country's leader Muammar Gaddafi was about to launch a genocide against his civilians to crush West-backed rebels in the city of Benghazi. This time, European leaders acted as pace-setters, with France's then President Nicolas Sarkozy in the forefront.

Norway, which is usually reserved and judicious, rushed into the skirmish headfirst, as the then-Prime Minister Jens Stoltenberg gave his government no time to reconsider. Over the course of four months in 2011, Norway dropped 567 bombs on Libya. During the operation's initial phase, 17 percent of NATO's bombs were dropped by Norway. Afterwards, every tenth bomb in Libya was dropped by Norwegian pilots. Later, Norway received much praise for its perhaps disproportionate contribution from US President Barack Obama himself.

However, Norway's valor over Libya's ruins will hardly go down in history as a shining moment of Stoltenberg's otherwise impressive career. After Gaddafi was hunted down and slain, the hostilities went beyond all reasonable interpretations of the UN mandate. Libya collapsed, ceasing to function as a state after all the foreign "liberators" went home.

© AP Photo / Matt Dunham
Norway Follows in US Footsteps, Ready to Deploy Aid to Syrian Rebels
According to the Norwegian newspaper Dagbladet, perhaps Jagland should be subject to a Norwegian state enquiry for Libya. It need not be as extensive as the British one in Iraq. Stoltenberg's decision to join in was quickly clubbed using mobile phones, and there weren't many cumbersome documents to investigate, the newspaper pointed out.

Historically, Thorbjørn Jagland and Jens Stoltenberg, both former leaders of the Norwegian Labor Party and both former prime ministers, fought a bitter power struggle in the early 2000s on home turf. Today, it may look like a rematch, albeit this time in the European arena, between the Secretaries-General of the Council of Europe and NATO.

"Not a single attempt to put things into perspective during coverage of the NATO Summit. Only propaganda in the Norwegian press, almost as bad as the Russian propaganda against "the West. It's time to turn on your wits, as Mikhail Gorbachev put it," Jagland wrote.

This may indicate the next round of the decade-long melee between two archrivals.