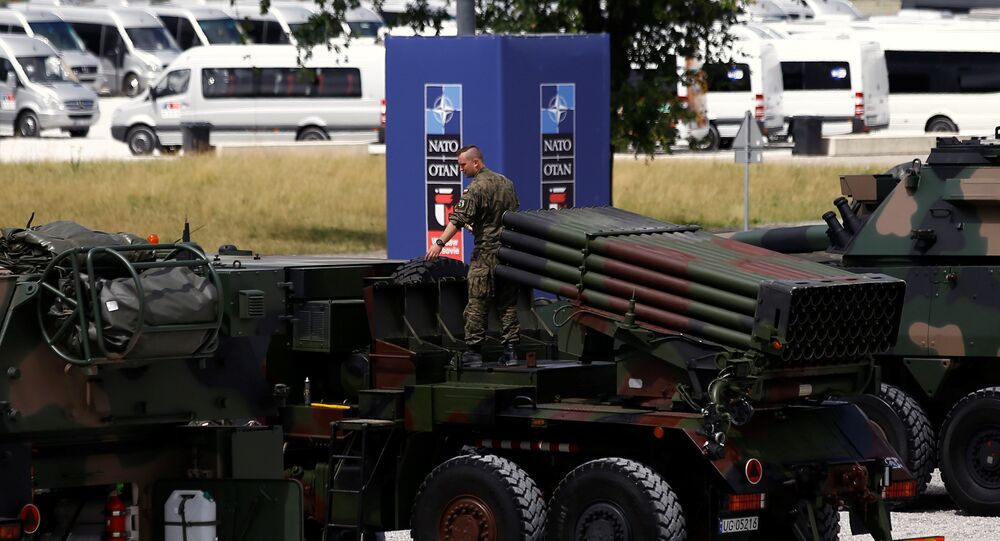 Why NATO Has Begun to Resemble a Colossus With Clay Feet

Although NATO has been expanding rapidly since the collapse of the Soviet Union, it is beginning to resemble a colossus with clay feet.

© AP Photo / Vadim Ghirda
Nobel Peace Laureate: US, NATO Playing Nuclear Brinkmanship With Russia
Commenting on NATO's Warsaw Summit Communiqué, French political analyst Thierry Meyssan has drawn attention to the fact that there are no geographical limits to the Alliance's area of operations. However, regardless of its triumphant expansion, the military bloc is turning into a colossus with clay feet.

In his recent article for Voltairenet.org, Meyssan takes a walk down memory lane and describes the history of NATO. The French analyst points out that while NATO was created as a "defensive" alliance, its role has drastically changed since the collapse of the Soviet Union.

Since the 1990s, the Alliance has absorbed both Eastern European and non-European countries, with varying levels of participation.

NATO obligates its members to spend at least 2 percent of their GDP on the Alliance's military needs.

However, the other side of the coin is that the US-led military bloc is steadily degrading.

"Over the last twenty years, NATO has consistently pushed to destroy the military aircraft factories of its member states, with the exception of the United States," Meyssan narrates, pointing to the fact that Washington has nearly forced its allies to become dependent on the omnipotent US military industrial complex.

The analyst refers to the fact that the Pentagon's much-discussed F-35 Joint Strike Fighter project has become a headache for the US. Despite the fact that millions of dollars have been poured into the project, the all-purpose combat jet is anything but ready for combat.

Meyssan underscores that at the same time, the military modernization of Russia and China has proven to be far more effective than that of the US. The two emerging powers are likely to surpass NATO in the field of conventional weapons in the near future, while Russian multirole aircraft spark envy among US pilots.

The Brexit vote has added insult to injury: "The day after the British voted no to continued membership in the EU, the foreign ministers of Germany and France put forward the idea of a 'European security pact'," Oystein K. Langenberg of Aftenposten wrote.

© AFP 2021 / DPA / PETER ENDIG
Goodbye NATO? Brexit Threatens to Speed Up Creation of a Pan-European Army
Indeed, the EU officials have long been harboring the idea of creating a new Euro Army, independent from Washington. Now it seems the project will catch a second wind after the UK's withdrawal from the European bloc.

"While NATO exists to defend its members — most of which are European — from external attack, Europeans must be better equipped, trained and organized to contribute decisively to such collective efforts, as well as to act autonomously if and when necessary."

The document has prompted the Danish daily broadsheet newspaper Politiken to assume that the new Global Strategy is paving the way for "creating a genuine European army."

The importance of NATO is waning and the Alliance's Warsaw Summit failed to hide the cracks that have begun to show among its European members.