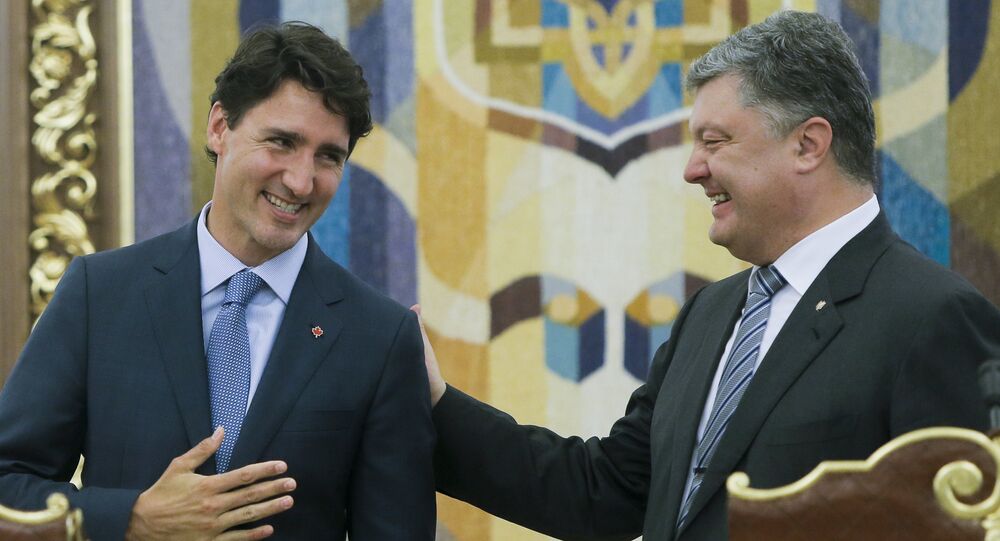 Poroshenko Administration head Borys Lozhkin believes that contemporary Canada was built by Ukrainian colonists. He says as much in a post on his Facebook page.

Canadian Prime Minister Justin Trudeau arrived in Ukraine on Monday for his first visit to the country. The friendly visit included many photo ops, and the signing of a Canada-Ukraine free trade deal, with an emphasis on the two countries' close ties displayed throughout. Still, Trudeau could not confirm whether Canada's 200 military trainers would stay in Ukraine after 2017, when their existing commitment runs out.

During the visit, filled with warm words about Canada's "support for the people of Ukraine," things got a little out of hand. Borys Lozhkin, a Ukrainian oligarch-advising media manager who now serves as the head of Petro Poroshenko's presidential administration, went so far as to suggest that Ukrainians not only contributed to Canada's formation – they practically built the place.

© AP Photo / Efrem Lukatsky
Act of Reassurance: Canadian PM in Kiev as ‘Reminder of Ottawa’s Support’
Lozhkin made a Facebook post about Prime Minister Justin Trudeau's photo-op visit to a Ukrainian art gallery, where the Ukrainian side offered the Canadian leader a special gift – an avant-garde Malevich-style painting of the Canadian flag created by a local artist featuring gold and blue accenting – the colors of the Ukrainian flag.

"The Canadian and Ukrainian colors symbolize the longstanding relationship between our two countries," the official explained. "125 years ago, the first Ukrainian colonists appeared on Canadian soil. Their work created Canada as we know it today," he added.

"Ukrainians," Lozhkin noted, "have become an integral component of Canadian culture, economy, government, and public relations. And Canada has become a loyal and reliable friend of Ukraine."

For the record, while there is no doubt that the Ukrainian-Canadian diaspora played a significant role in the history of the country, Canada 'as it is known today' was actually created by French and British explorers, settlers, merchants and imperial dynasties, and populated before that by the continent's considerable Native American population.

The official's choice of words didn't escape the mirth of the social media, both among Russian and English-speaking audiences:

​"Stop teasing Ukrainians. After all, they lit up the sun as well. They might get angry and turn it off."

​"Another gem from the Poroshenko Administration: Canada was created by Ukrainian colonists who landed there 125 years ago."

Nice to know from Poroshenko's administration that Ukrainians created Canada…https://t.co/PKT6cm8Goq

You couldn't make it up!#Ukraine to #JustinTrudeau

Trudeau Would Not Confirm Extension of Canadian Training Mission in Ukraine