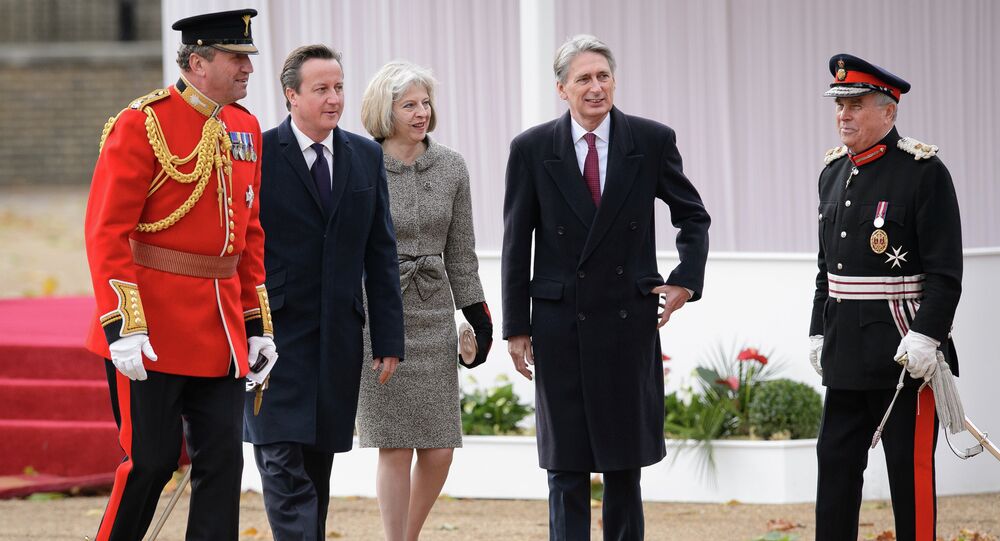 How May's Appointment as British PM Will Change UK-Russian Relations

What does the future have in store for UK-Russian relations after Theresa May assumes the position of British prime minister? According to experts, the 59-year-old politician is likely to adopt a pragmatic approach to foreign policy.

David Cameron will step down on Wednesday, leaving British Conservative politician Theresa May to take the reins of the UK's first post-Brexit government, becoming its 76th prime minister.

The question remains open how May's appointment as the next British leader will affect London's stance toward Russia.

"I can't see how Theresa May's personality may influence the relationship between the United Kingdom and Russia," Timofey Bordachev, director of the Centre for Comprehensive European and International Studies (CCEIS) at Russia's Higher School of Economics, told the media outlet Gazeta.ru.

© REUTERS / Suzanne Plunkett
Theresa May to Become British PM on Wednesday
According to the expert, the mistrust between Moscow and London that has lasted for more than a decade is of a "systemic nature."

Bordachev believes that a "thaw" between the UK and Russia may occur if either Moscow refuses to pursue its geopolitical goals and recognizes the West's leadership or London reconciles itself with the reality that the West is no longer the sole center of power on the world arena.

However, the media outlet suggests that Theresa May is not interested in further inflaming tensions with Moscow.

It refers to the fact that in January 2016, the politician played down the scandal triggered by the controversial report denouncing the Kremlin for allegedly "killing" Alexander Litvinenko, a former officer of the Russian Federal Security Service (FSB), in London.

Indeed, following the report's publication, Home Secretary Theresa May called attention to the fact that there was a "wider national security interest in retaining a guarded engagement with Russia, including working with Moscow to bring about a peace settlement with Syria," according to the Guardian.

"Speaking for myself, I have a particular reason to think well of Theresa May.  She was a strong opponent of the setting up of the Public Inquiry into Litvinenko's death, initially refusing permission for it until overruled by the High Court… When the Inquiry finally delivered its report — saying Putin and the Russian authorities 'probably' murdered Litvinenko — her response was notably unenthusiastic, suggesting that she continued to hold to her original view," Mercouris underscores.

It is worth mentioning that Mercouris shed light on the much-discussed Litvinenko Inquiry in his January analytical report for Consortiumnews.com, dubbing it a "farce."

"That suggests a level head and points to someone who is not obsessed with playing to the gallery or following political fashions.  If so, then that makes Theresa May the right candidate for the Conservative party to elect as Conservative leader and British Prime Minister at the present time," the political analyst suggests.

While May deserves credit for adopting a pragmatic stance toward the Russo-British relationship amid the outright anti-Russia propaganda campaign, she is hardly a "pro-Russian" politician.

© REUTERS / Peter Nicholls
May(be) the Next Iron Lady? All You Need to Know About Britain's New PM
In her article for Daily Mail, published on July 4, Theresa May named Russia as one of the UK's major threats along with the Islamic State and North Korea and called for maintaining Britain's independent nuclear deterrent.

"We have all witnessed the renewed belligerence of Russia in recent years, most notoriously in the case of its illegal annexation of Crimea, and Vladimir Putin is intent upon upgrading Russia's nuclear forces. The Russian military has increased the number of nuclear exercises it conducts, while Putin threatens to base nuclear forces in the Crimea and Kaliningrad, the Russian exclave on the Baltic Sea that neighbors Poland and Lithuania," May pointed out, stressing that the UK will remain committed to working alongside its NATO allies.

It is likely that the UK will not dramatically change its foreign policy course toward Russia, keeping Moscow at a distance and working together with the Kremlin only if it considerably benefits London.

Britain Needs Snap Election After Cameron Announces May as Successor