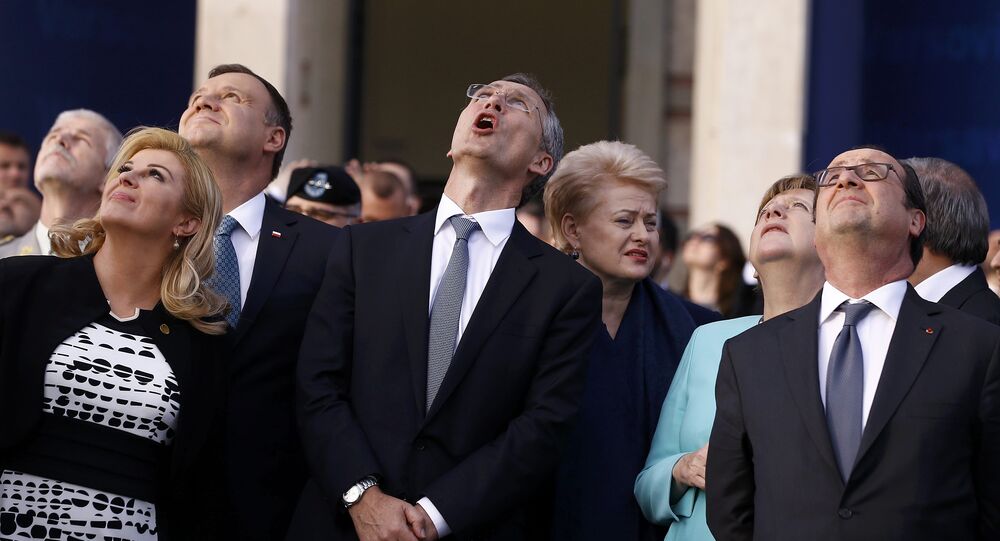 The North Atlantic Alliance has focused on dealing with imaginary threats to Europe and the US (take the overhyped, yet non-existent threat from Moscow to NATO members) instead of tackling real challenges, like terrorism, Russian Duma Foreign Affairs Committee chairman Alexei Pushkov told the Izvestiya newspaper.

"NATO is dealing solely with imaginary threats to the transatlantic community, instead of dealing with real" challenges, he said. "The so-called Russian aggression is an imaginary threat. Russia does not pose a threat to any NATO member. Attempts to blame Russia for [the civil war] in Ukraine are an effort to create an artificial threat."

© Sputnik / Aleksey Druzhinin
Trojan Horse: This Country Ruining NATO's United Front on Russia
Pushkov also mentioned that the US has employed methods that are "completely ill-fitted" to deal with major challenges that it faces, leaving itself and the alliance "confused" and "disoriented."

Sergei Mikhaylov, a senior researcher at the Centre for Euro-Atlantic and Defense Studies of the Russian Institute for Strategic Studies (RISS), offered a different explanation for the US and NATO invoking the so-called "threat" from Russia.

Washington views the alliance "as an instrument to maintain its dominance in Europe." Anti-Russian sentiment is meant to mask this, he told the daily.

Nevertheless, NATO has been persistent in its attempts to counter Moscow.

© Sputnik / Ramil Sitdikov
Gorbachev: 'The Next War Will Be the Last'
Chairman of the Association of Soldiers against War and Retired Colonel Jiri Bures told Sputnik that the bloc's task and its activities are currently aimed at "stopping the Russian 'expansion.'" The North Atlantic Alliance carries out missions that "help further Washington's geostrategic interests," he added.

NATO has adopted several major measures aimed at responding to what it believes is Russia's "aggressive" behavior. These include a 5,000-strong high-readiness "Spearhead Force" to complement its Response Force (NRF), enhanced war-gaming, prepositioning military equipment and increased military spending.

In addition, the bloc plans to deploy four battle groups to Estonia, Latvia, Lithuania and Poland in 2017. They will stay in Eastern Europe and the Baltic region on a rotational basis. Mikhaylov referred to the latest initiative as "symbolic measure and an act of propaganda."

​Moscow has been worried about NATO's increasing assertiveness in Europe and particularly on Russia's doorstep. According to Bures, it has reasons to be concerned.

If NATO continues with its current strategy, then "any attempts to improve the situation will become more remote," the Czech anti-war activist added, referring to the already strained relations between the bloc and Russia. "In the end, the Euro Atlantic territory will expand to Russia's borders, possibly leading to ever-escalating tensions in Europe."