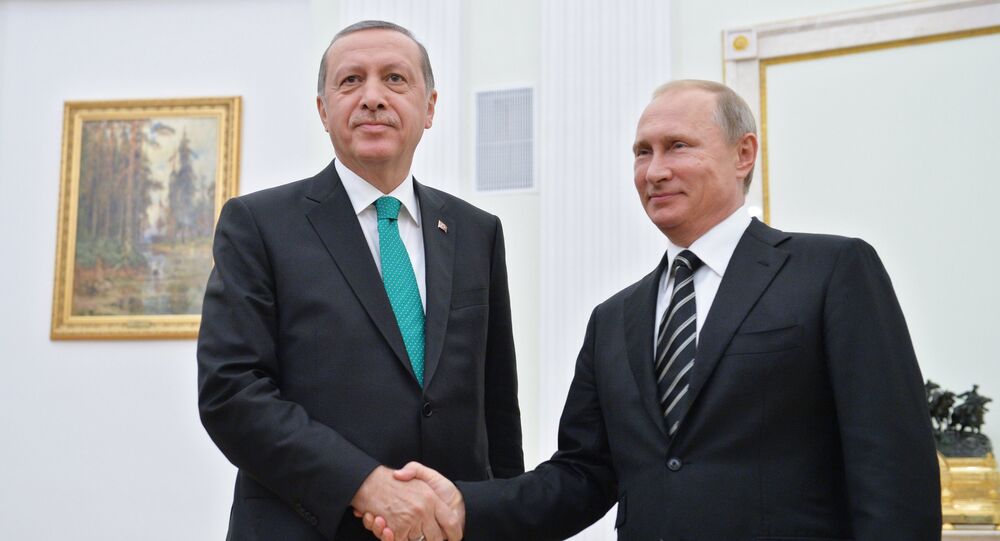 The publication assumes that Erdogan must have agreed to make concessions in exchange for the restoration of relations between the two countries. The most likely one is the change of its foreign policy in Syria, journalist Rainer Hermann wrote for the newspaper.

"One can imagine that for the reconciliation with Russia Erdogan has paid with changing his policy toward Syria. After all, Russia and Turkey hold opposite positions in Syria. If Turkey refuses to give up its claims about Assad's resignation, it will be able to explain this by a transition to real politics," DW wrote citing the journalist.

© REUTERS / Murat Cetinmuhurdar/Presidential Palace
It's Not Too Late to Apologize: Russian and Turkish Politicians Assess Erdogan's Message to Putin
Earlier, Russia and Turkey agreed that opposition groups should withdraw from the territories controlled by the terrorists although previously Turkey allowed al-Nusra Front to use its territory for preparing attacks in Syria and opposed international efforts to put al-Nusra Front on the terrorist list.

According to Sergei Lavrov, Turkey has accepted the new rules of the game in Syria. Now, if moderate opposition forces do not leave the areas controlled by the terrorists they will be considered as terrorist accomplices.

"Turkey felt the necessity to adjust to the new international situation. And after the new government of Binali Yildirim had been formed Ankara has undertaken a number of breakthrough political steps," political expert Prof. Dr. Salih Yilmaz said in an interview with Sputnik.

© AFP 2021 / DANIEL MIHAILESCU
After Downing of Russia’s Jet Erdogan Needs NATO in the Black Sea
Immediately after Binali Yildirim became Prime Minister, he announced Turkey's policy to be aimed at maintaining friendly relations with countries in the region. Turkey first reestablished its relations with Israel and then began to rebuild its ties with Russia, the expert said.

"Russia is a very important country for Turkey in economic, political and strategic terms. Turkey understands that it will benefit from the development of relations with Russia, especially in Eurasia and the Middle East," Yilmaz said.

"By improving its relations with Russia, Turkey can strengthen its ties with the SCO and the Eurasian Union and other international organizations in Eurasia. Russian-Turkish cooperation will also enable a more peaceful situation in the Caucasus and in Syria. Therefore, the current foreign policy of the Turkish government headed by Binali Yildirim will pay more attention to peace in the region and, above all, it will be directed at resolving the crisis in relations with its neighbors," he added.

Earlier, Turkish President Recep Tayyip Erdogan sent a letter to Russian President Vladimir Putin in which he expressed his regrets over Turkey's downing of a Russian warplane in November 2015. Following the incident, Moscow imposed a number of restrictive measures on Ankara, including food and travel bans that impacted the Turkish economy.