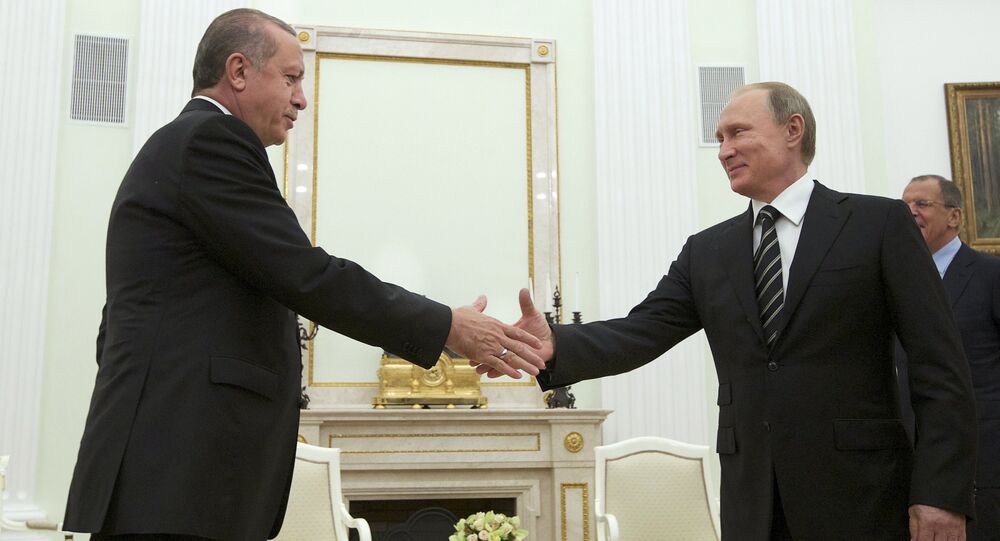 President Vladimir Putin ordered the Russian government to launch the process of restoring cooperation with Turkey, including in the spheres of trade and economic ties, after phone conversation with his Turkey counterpart earlier in the day, the Kremlin said Wednesday.

"The Russian leader said that he would instruct the government to start negotiations with the Turkish authorities to restore the mutually beneficial bilateral cooperation in trade, economic and other areas."

Recep Tayyip Erdogan assured that Turkey will do everything to ensure the safety of Russian citizens in the country.

"Although this announcement is being made amid growing terror threat, we [Russia] will lift the administrative restrictions in this sphere [tourism], and I am asking the government of the Russian Federation to begin the process of normalizing trade and economic relations with Turkey," Putin said at a government meeting.

Putin and his Turkish counterpart Erdogan underscored the need to bolster international cooperation in the fight against terrorism, the Kremlin’s press service said.

"Both sides emphasized the need to intensify international cooperation in the fight against a common terrorist threat."

The Russian and Turkish presidents agreed to hold a personal meeting in the near future, according to the Kremlin.

© AFP 2021 / OZAN KOSE
Erdogan's Letter to Putin Included Both Words of Regret, Apology
On Monday, the Kremlin announced that Erdogan had sent a letter regarding the incident with the Russian plane, saying "Excuse us" and pledging to take any steps to "relieve the pain and severity of damage" caused to the family of the pilot killed during the incident.

On Wednesday, Putin noted that Erdogan's letter created preconditions for the resumption of joint work. He told the Turkish president that his letter paved the way to turn a new page in bilateral relations after the crisis.

"Vladimir Putin underlined that the letter from the Turkish president created preconditions to turn the crisis page in the bilateral relations and start the process of restoring join work on international and regional problems, as well as on the development of the entire complex of Russian-Turkish relations."

© Photo : DHA
Turkish Court Extends Custody of Suspected Killer of Russian Su-24 Pilot
The Russian Su-24 attack aircraft was shot on November 24, 2015 by a Turkish F-16 fighter near the Turkish border over Syria. Following the incident, Moscow imposed a number of restrictive measures on Turkey and has repeatedly said that Ankara should apologize for downing the plane and cover any material losses to the country and the pilot's family.

The Russian president expressed hope in the phone conversation with Erdogan that Turkey's investigation of the killing of the Russian Su-24 pilot will be objective.

Commenting on the Putin-Erdogan talks, the Kremlin press service said that "the conversation was constructive and aimed at restoring the traditionally friendly nature of the bilateral cooperation in many spheres."