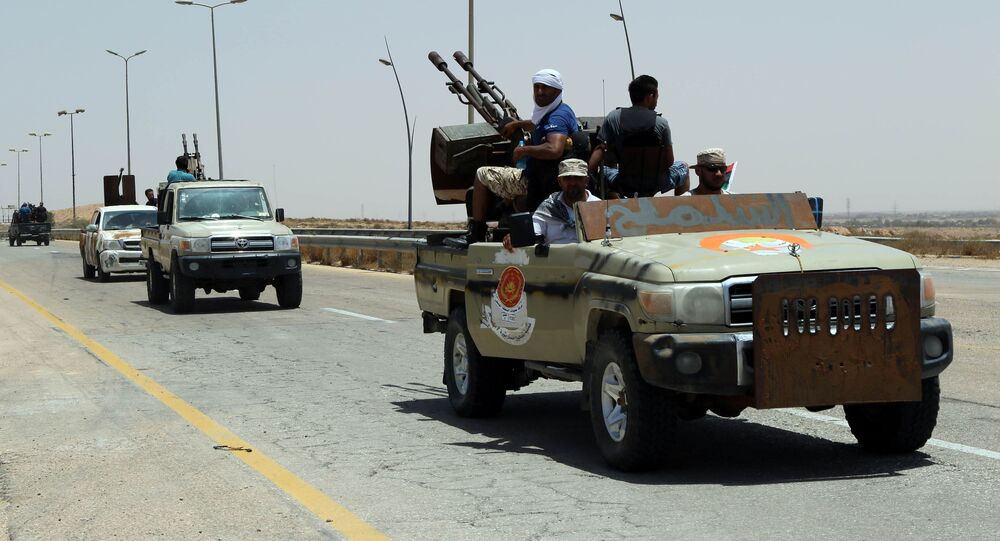 Why Anti-Daesh Offensive in Sirte Won't Bring Peace to Libya

The anti-Daesh offensive in the port city of Sirte will hardly bring peace and stability to Libya, experts say, since the brutal group was not the one who threw the once prosperous and stable nation into chaos in the first place.

Forces loyal to the recently created UN-backed Government of National Accord (GNA) and local militias entered Sirte on June 9, pushing the militants into a five square kilometer zone in central and northern parts of the city. They have made slow, but steady progress despite bitter resistance from Daesh, a group that still controls large areas in Iraq and Syria.

© AFP 2021 / MAHMUD TURKIA
Libyan Army Chief Discusses Weapons Deliveries With Russian Leadership
However, it would be "naïve" to assume that chaos in Libya will be a thing of the past once the hometown of the country's late leader Muammar Gaddafi is free, lawyer and World Bank consultant Olivier d'Auzon wrote for Le Huffington Post.

The reason is simple. Daesh was not there when Libya was ruined, but the militants indeed used the instability that ensued to their own advantage. They captured Sirte in 2015, four years after the NATO-led military intervention that overthrew Gaddafi.

In other words, Daesh, according to the lawyer, is merely a "convenient enemy" whom some use to pin the blame for everything that went wrong in the country instead of naming those who are truly responsible for Libya's current state.

The terrorist group "turned Sirte into its stronghold in 2015," he noted. "It follows then that the militants could not have been able to spark the anarchy that has ravaged Libya since 2011. Salafist groups from Tripoli and Muslim Brotherhood from Misrata" are to blame for this.

The forces that are trying to push Daesh out of Sirte were ok with the terrorists present in the city for a long time, he added, saying that these groups "have been sponsored by Ankara, Doha, the European Union and Washington."

© AP Photo / Manu Brabo
General view of buildings ravaged by fighting in Sirte, Libya (File)
© AP Photo / Mohammed el-Shaiky
Daesh Terrorists in Libya Use Civilians as Human Shields - Military
It would then be safe to assume that the battle of Sirte is not really about destroying Daesh or bringing peace to Libya. More likely it is part of a larger power struggle in the country, involving the GNA and its allies, forces loyal to General Khalifa Haftar and the House of Representatives (HOR) based in the eastern town of Tobruk, as well as the General National Council (GNC) located in Tripoli and GNC-affiliated militias of Misrata.

The latter have backed the US-sponsored GNA, while Haftar is opposed to the new government.

"Libya's competing groups see the struggle for Sirte as a sort of prize to be won," Amanda Kadlec, a project associate at the RAND Corporation, wrote for War on the Rocks. "Both unaffiliated and pro-GNA militias from Misrata and Haftar's anti-GNA militias to the east likely consider ousting [Daesh] from Sirte as the optimal path to international attention and the support that comes with it."

Those who will receive that support, including weapons, intelligence coordination, etc., could well use it later against each other.