Disintegration of the European Union (EU) is possible and practically inevitable after the United Kingdom (UK) voted for the exit from the EU, known as Brexit, billionaire investor George Soros said Saturday.

MOSCOW (Sputnik) — On Thursday, the United Kingdom held a referendum to determine whether or not the country should leave the EU. According to the final results, 51.9 percent of voters, or 17.4 million people, decided to support Brexit, while about 16.1 million opposed it.

"Now the catastrophic scenario that many feared has materialized, making the disintegration of the EU practically irreversible," Soros has written in a commentary on the website Project Syndicate. 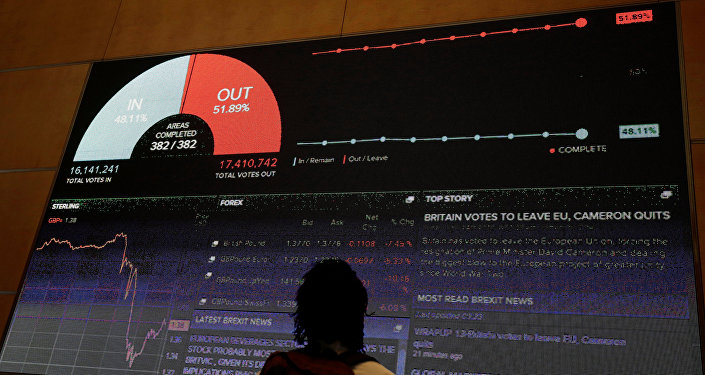 While the consequences of Brexit for the UK can be such that the "UK itself may not survive," according to Soros, "the implications for Europe could be far worse."

On Tuesday, world-renowned economist Soros predicted that Brexit would be a catastrophe for the UK economy, stressing that the pound would drop by 15-20 percent, and his estimations appeared were confirmed following the referendum.

"The EU truly has broken down and ceased to satisfy its citizens’ needs and aspirations. It is heading for a disorderly disintegration that will leave Europe worse off than where it would have been had the EU not been brought into existence."

© AFP 2019 / JUSTIN TALLIS
Petition Calling London to Join Independent Gathers Over 150,000 Signatures
Soros called for "serious program of Eurozone reform, which would have to include a genuine banking union, a limited fiscal union, and much stronger mechanisms of democratic accountability," noting that "time is not on Europe’s side."

Following the Brexit referendum, several other EU states witnessed the requests for holding the referendum on the exit from the EU.

On Saturday, a petition to hold a referendum on Finland's membership in the EUhas been launched by the country's nationalist Finns Party, gathering over 10,000 signatures so far, local media reported.