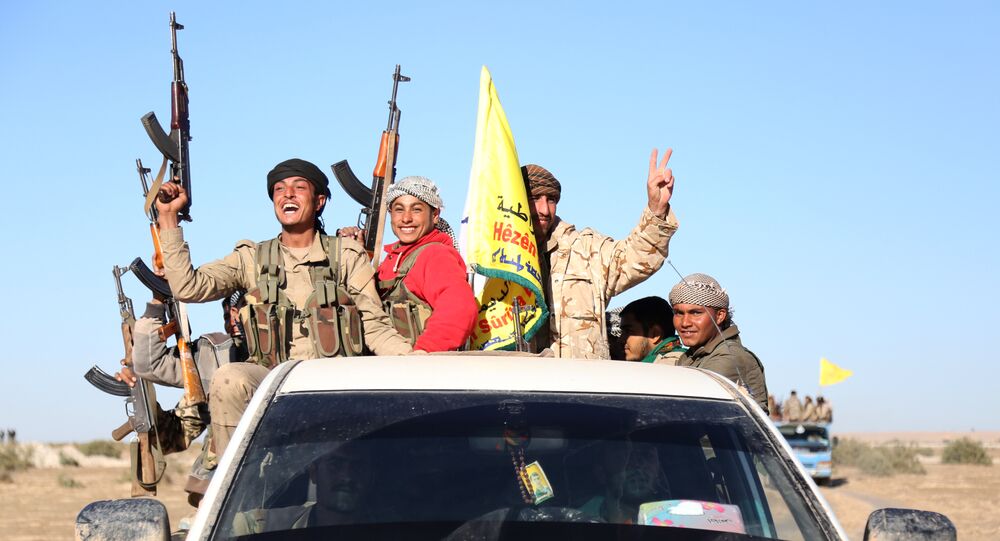 Race for Raqqa: What is Behind US-Backed Rebels' Plan to Seize Manbij

While the Syrian Arab Army has retreated in the western part of Raqqa province after Daesh's blitz-offensive, the US-backed Syrian Democratic Forces advance has got bogged down in Manbij region. It remains unclear which army will reach Raqqa first. What is at stake is Syria's integrity, experts say.

© AP Photo / Alexander Kots/Komsomolskaya Pravda
Daesh Attacks Syrian Army With Nerve Gas Ammunition in Raqqa Province
The two separate advances launched by the Syrian Democratic Forces and the Syrian Arab Army against Daesh's northern foothold in Syria have stalled: the SDF are yet to expel the terrorist group out of Manbij, Daesh's strategic gateway to the Turkish border, despite the US-led coalition's air support, while the SAA was forced to retreat along the Raqqa-Ithriya highway in western Raqqa province.

According to Lebanese Al-Mayadeen broadcaster, the Syrian government forces came under chemical attack launched by Daesh as part of the jihadists' blitz-offensive against the SAA on June 20-21.

Al-Masdar News wrote Friday that Daesh has reportedly captured the Palmyra Grain Silos and is now "at the eastern fringes of Palmyra (Tadmur) which is within striking distance of the imperative military airport [the T-3 Military Airport] that was just reopened by the Syrian Air Force."

Commenting on the issue, Russian journalist and political analyst Eugeni Krutikov noted in his analytical report for online newspaper Vzglyad that the retreat of the SAA in western Raqqa province was caused by a series of tactical errors.

"This [Daesh] attack aimed at the government forces' front stretched along the highway was predictable," Krutikov writes, adding that by June 20 jihadists accumulated enough military force in the region to launch a counterattack against the SAA.

© AFP 2020 / Delil souleiman
Race to Raqqa: Coordination Between Syrian Army and Rebels 'Quite Real'
The analyst narrates that Daesh used its "basic tactic": a number of suicide bomber trucks attacked the SAA and allied militias' checkpoints; although some trucks were destroyed while approaching their targets, the SAA's defense positions were dismantled. As a result, in about 24 hours Daesh has retaken 15-20 kilometers of territory gained by the Syrian Army in the course of its advance towards Tabqa airbase in Raqqa province.

Krutikov remarks that the assistance of Russia's Aerospace Forces had not saved the day for the Syrian Army: in addition to suicide bomber trucks, Daesh used a very limited number of tanks during the attack, making airstrikes against the elusive military vehicles unproductive.

In this light the SAA's decision to retreat was right, as the Syrian armed forces faced the encirclement threat from the terrorist group.

Suffering from the lack of manpower, Daesh, however, jumped at the opportunity to attack the SAA's excessively stretched front, Krutikov explains.

In addition, jihadists have kicked off a simultaneous strike in the direction of Palmyra. However, according to the analyst, jihadists' alleged gains in eastern fringes of Palmyra "are not critical" and pose no threat to the city.

© AFP 2020 / DELIL SOULEIMAN
Syrian Kurds Will Get Raqqa as Reward for Being Loyal US Allies
Meanwhile, the SDF's advance toward Manbij has also got bogged down.

"With Manbij fully besieged for two weeks, the Syrian Democratic Forces (SDF) are yet to wrestle the city from the Islamic State despite extensive US coalition air support," Al Masdar News reported Thursday.

"Manbij is strategically important as it represents a gateway for ISIS [Daesh] into its last border areas with Turkey, a country often used by ISIS to smuggle foreign fighters and weapons into the Islamic State caliphate," the media outlet emphasized.

On Thursday, US Central Command (CENTCOM) reported that the Syrian Arab Coalition (SAC), supported by the US-led coalition, is determined to retake Manbij from Daesh.

"Syrian Arab Coalition (SAC) elements have consolidated their position around Manbij in anticipation of the next phase of operations to secure the city," CENTCOM stated.

Earlier, some analysts assumed that there could have been coordination between the Syrian government forces and the US-backed SDF, which launched two separate offensives against Daesh's northern foothold in Syria.

However, according to Semyon Bagdasarov, Director of the Moscow-based Center for Middle Eastern and Central Asian Studies, the US-backed SDF, comprising mostly Kurdish militants, is pursuing its own geostrategic goals in the region. The offensive on Manbij is part of a plan aimed at eventual division of Syria, the expert told Russia's Svobodnaya Pressa media outlet.

© AFP 2020 / DELIL SOULEIMAN
What is Behind the Deployment of French Special Forces in Syria
Bagdasarov called attention to the fact that after announcing its advance on Raqqa, the SDF suddenly changed its plan, marched towards Manbij, and encircled the city. The expert believes that it is a neither deceptive maneuver nor a dramatic strategic shift: the SDF's advance on Raqqa continues, while the upcoming takeover of Manbij's is part of a comprehensive US-Kurdish plan.

"Apparently, they decided to capture Manbij first, then [to seize] a border city of Jerablus [Jarabulus] that lies within a few dozen kilometers away [from Manbij]. Then they would be able to move to another border city — Azaz — and so far they would gain access to Afrin, in alliance with the Free Syrian Army and other opposition groups," Bagdasarov suggested.

According the expert, in the result of these maneuvers, a large territory in northeastern and northwestern Syria would be carved out of the country. Two stumbling blocks lying in the way of the rebels and their Western backers are Aleppo and Idlib provinces, he added.

If Kuridish militants liberate Raqqa it will most likely become part of Rojava, or so-called Western Kurdistan, the journalist suggests, adding that the SDF and the People's Protection Units (YPG) may also become Washington's proxies in the country.

"One cannot rule out that support for Greater Kurdistan could be one of the key components of Washington's strategy in the Middle East. In this context, the Syrian Kurdistan will become a driving force of Syria's federalization, a process that the US will benefit from," he believes.