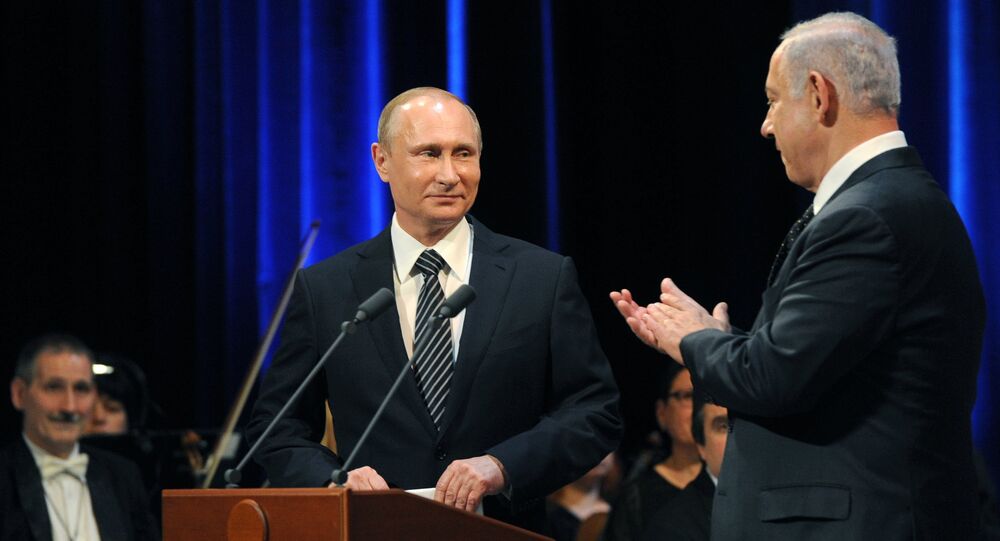 What Shared Interests Russia, Israel Have in the Middle East

The Russo-Israeli relationship has become especially cordial in recent years, CIA veteran Paul R. Pillar notes. But what lies at the root of Tel Aviv's shift to Moscow?

The recent Russo-Israeli rapprochement has become the focus of Washington's attention. CIA veteran and the Brookings Institution's non-resident fellow Paul R. Pillar explains that since the Israeli-Russian relationship is not encumbered by special expectations — either positive or negative —  the countries have a space to maneuver.

In contrast, "the US-Israeli relationship carries a very strong expectation, especially within domestic US politics, that the relationship is and ought to be one of strong and unshakable friendship. Any apparent deviation from that expectation is treated as if it were a serious problem," Pillar remarks in his opinion piece for the National Interest.

© Sputnik / Sergei Guneev
Indispensable Partner: Russia Could Replace US as Israel’s Primary Ally in Middle East
It is no secret that Washington's relationship with Tel Aviv has recently deteriorated, not to mention the chill between the White House and the Kremlin.

Pillar quotes Robert Danin, senior fellow for Middle East studies at the Council on Foreign Relations, who noted in his latest article for Foreign Affairs magazine that Israeli Prime Minister Netanyahu and Russian President Putin "clearly enjoy a better relationship with each other than either does with US President Barack Obama."

Pillar refers to the fact that Israel abstained from the US-led effort to isolate Russia at the UN over the Crimean issue, thus distancing itself from Washington's policy in Ukraine.

Furthermore, in contrast to Washington, the Netanyahu government is not actually interested in ousting Syrian President Bashar al-Assad:  "Israel enjoyed many years of quiet on the Golan front with the Assads in power, which is something it cannot expect with almost any possible alternative outcome of the war," the CIA veteran emphasizes.

© AFP 2021 / THOMAS COEX
Pivot to Russia: Israel Wants Closer Ties With 'New Sheriff' in Middle East
While US-Israeli relations are bursting at the seams over the Iranian nuclear deal, Tel Aviv voices no concerns regarding Russo-Iranian and Russo-Syrian cooperation.

Moreover, Israel and Russia are bolstering security ties: "Netanyahu and Putin now have a secure hot line between their offices," Pillar notes, adding that Tel Aviv is selling advanced military technologies to Russia.

Analysts point to the fact that Tel Aviv regards Russia as a serious geopolitical player in the Middle East.

"You can hardly blame the Israeli government for looking north to the Russian Federation for a partnership with the new sheriff in town," Washington Times columnist L. Todd Wood wrote in early June.

"Israel can no longer count on the United States for its ultimate security. America is no longer the protector of last resort," he added.

© AFP 2021 / JACK GUEZ
Pivot to Russia? Why Israel Could Shun Washington, Improve Ties With Moscow
At the same time, according to Dan Williams and Denis Dyomkin of Reuters, Russia has recently become "the closest thing to a guarantor" that Tel Aviv's "most potent enemies" — Iran and Syria — would restrain themselves from attacking Israel.

Iranian newspaper Khorasan echoes the journalists, pointing out that "some analysts say that Russia's engagement in Syria helps in fact to maintain Israel's security. It has also allowed Tel Aviv to refrain from launching an unnecessary military campaign [in Syria]."

In addition, there is an emotional factor that could influence the relationship between Russia and Israel: hundreds of thousands of Russian Jews are living in the Middle Eastern country.

However, according to Pillar, there is even more to that matter than meets the eye.

Citing Anna Borshchevskaya of the Washington Institute for Near East Policy, the CIA veteran suggests that "the Russian and Israeli leaders share an interest in jointly sticking a finger in the eye of the United States."

"This sort of situation, in which two states team up to frustrate and oppose a third, is one instance of exercising what realists would call a balance of power," he concludes.