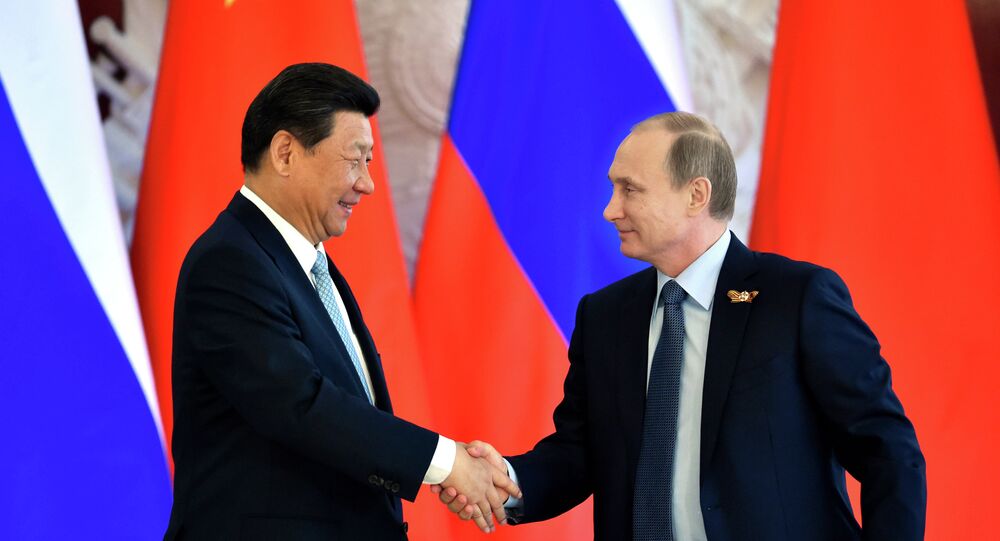 Russia is pushing ahead with its project of a "more extensive Eurasian partnership" involving the Eurasian Economic Union, Moscow's CIS partners as well as China, India, Pakistan and Iran; meanwhile, Beijing and Moscow continue to build a Eurasian economic corridor that will stretch from Shanghai to Berlin.

Russian President Vladimir Putin's visit to Beijing, scheduled on June 25, aims to strengthen economic ties between Russia and China and facilitate the development of the countries' Eurasian projects.

In his interview with Xinhua, recorded on June 17 on the sidelines of the St Petersburg International Economic Forum, Vladimir Putin emphasized:

"It turns out that to say we [Russia and China] have strategic cooperation is not enough anymore. This is why we have started talking about a comprehensive partnership and strategic collaboration."

"'Comprehensive' means that we work virtually on all major avenues; 'strategic' means that we attach enormous inter‑governmental importance to this work," the President of Russia explained.

© Sputnik / Iliya Pitalev
Charm Offensive: This is Why Russia Bolstering Ties With ASEAN Nations
It is expected that the leaders of the two countries will sign more than 30 documents during Vladimir Putin's visit to Beijing.

"Predictably, the Russian President's trip to the People's Republic of China has become the focus of worldwide attention, especially after inking the agreement of integration of the Eurasian Economic Union (EAEU) and the China-led New Silk Road initiative on May 8, 2015," Sarkis Tsaturyan, a Russian-Armenian historian and international policy analyst, writes in his recent article for Regnum.

The analyst points out that over the past year Moscow has taken considerable steps in the Asian direction. For instance, on May 1, President Putin approved Federal law N120-FZ on ratification of free trade between the EAEU and Vietnam.

"Now Thailand is knocking on Russia's door," the analyst remarks, adding that not only Moscow is interested in Russo-Thailand rapprochement, but also Beijing, that is planning to build a navigation channel in the south of the kingdom, bypassing the Strait of Malacca.

However, there is much more to be done.

Speaking at the plenary session of the St Petersburg International Economic Forum on June 17 President Putin called attention to the fact that over 40 states and international organizations have expressed their willingness to establish a free trade zone with the EAEU, thus creating a "greater integration area."

"Our partners and we think that the EAEU can become one of the centers of a greater emergent integration area… Now we propose considering the prospects for more extensive Eurasian partnership involving the EAEU and countries with which we already have close partnership — China, India, Pakistan and Iran — and certainly our CIS partners, and other interested countries and associations," the Russian President underscored.

During a Government Hour at Russia's State Duma Lavrov pointed out that an agreement on trade and economic cooperation between the EAEU and China "is being drafted," as well as "an agreement in principle on a search for ways of integrating the development plans of the EAEU and the Silk Road Economic Belt." He added that negotiations on establishing free trade zones with many states from different parts of the world are also underway.

"New horizons are opening up by the initiative of Russian President Vladimir Putin on the start of consultations between the member states of the EAEU, the SCO [Shanghai Cooperation Organization] and ASEAN [Association of Southeast Asian Nations] on forming a comprehensive Eurasian economic partnership in the future," Lavrov told the State Duma.

© AP Photo / Mikhail Klimentyev
Russia, China, Mongolia to Sign Deal on Creation of Economic Corridor
Russia and China's initiatives are understandable in the light of the TPP (Trans-Pacific Partnership) and TTIP (Transatlantic Trade and Investment Partnership) projects championed by the US. Both countries are interested in creating a unified economic space in Eurasia.

Meanwhile, President of the People's Republic of China Xi Jinping has tested waters in Central and Eastern Europe during his latest trip. Remarkably, Beijing's initiative has received high praise in Warsaw and Belgrade, while the Baltic States are also seeking a way to jump on the New Silk Road bandwagon.

Tsaturyan explains that the China-led New Silk Road initiative envisages the creation of a 13,000 km-long corridor that will cross China, Mongolia, Russia, Belarus, Poland and Germany. As a result a unified economic space from Shanghai to Berlin will be established on the Eurasian continent, he stresses.

The analyst hinted at the fact that Germany and other major European countries are also interested in this integration process, regardless of Washington's obvious displeasure. According to Tsaturyan, Berlin and London seek to diminish the US' influence in Eurasia and swing the balance in their own favor.

Apparently, therefore German Foreign Minister Frank-Walter Steinmeier has openly denounced NATO's Anaconda-2016 military drills on Russia's doorstep as "warmongering" and "saber-rattling" that can deteriorate the situation on the continent and worsen the EU relations with Russia, the analyst suggests.