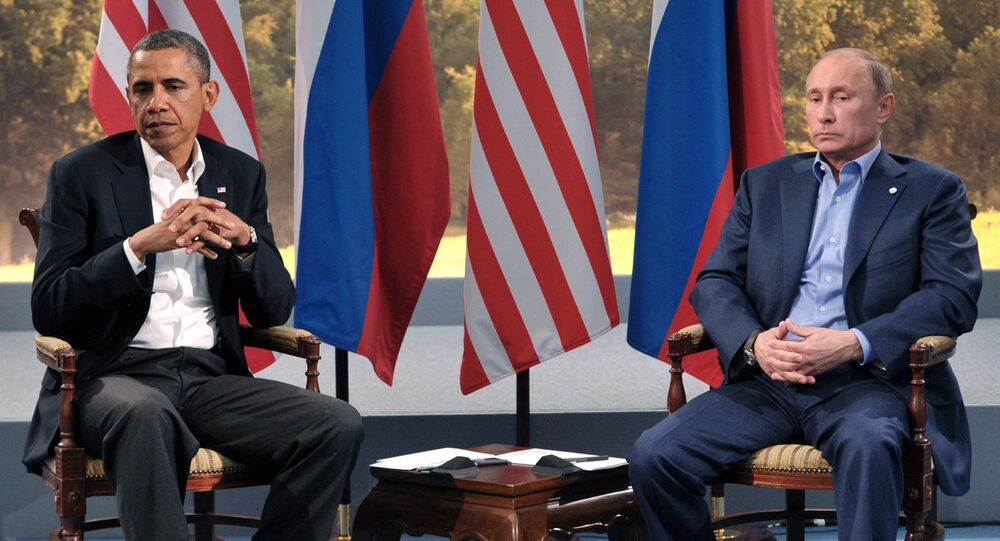 The US Congress has proposed a bill seeking to re-establish a Cold War-era body to counter Russian espionage. Patrick Armstrong, former political counselor at the Canadian Embassy in Moscow, and long-time analyst of the former Soviet Union and the Russian Federation, detailed the reasons why the US seeks to restart the Cold War.

New York-based internet media website BuzzFeed recently reported, citing an unnamed source in the US intelligence service, that the legislation in question calls to revive a presidentially-appointed group to counter "Russian spies and Russian-sponsored assassinations," in the United States. The group would also investigate the funding of Russian "covert broadcasting" and "media manipulation."

"One should never forget that all these kinds of bills actually put money into some people's pocket," Armstrong told Radio Sputnik.

© CC0
Reports of Re-Establishment of Anti-Russia Spy Body in US 'Saddening’ - Russian Embassy
The analyst asserts that there is money behind the invention and constant promotion of a "Russian threat." The US military is currently committed to "fabulously" expensive projects that "never really come to an end but everybody makes a pile of money out of." Playing the "bad Russians" card is a good way to stimulate business, he suggests.

"My favorite one was the Panama papers. ‘Ha! Finally we have proof that Putin is stealing money and hiding it abroad', [although] Putin's name doesn't appear anywhere in the papers [but] today we have the theory that obviously it's Putin behind the leak of the Panama papers," Armstrong observed. "There is no limit to this ridiculousness."

"What are the current stories now?" he asked. "Oh yes, Russia hacks into the DNC (Democratic National Committee) computer. No, it's some guy in a basement in Romania, just like the last guy who hacked into Hillary Clinton's stuff."

"Nobody's going to come out and say ‘Oh Gee, I guess we're just plain lying about Russians in Syria, invasion in Ukraine and the coming collapse of Russia… What they're going to say is that…'Putin has somehow cleverly got into people's minds, we need more money.'"

Another motive, Armstrong suggests, is US determination to expand NATO, in an attempt to get "better control of things."

"Somewhere," he asserted, "along the line, [the US] realized that expanding NATO — when all NATO membership meant was that you blew up Libya, or you joined in to celebrate the third decade of a losing war in Afghanistan — wasn't going to pull in new members. So it's trying to revive the old Russian threat."

A so-called 2017 Intelligence Authorization Bill was passed by the US Senate Intelligence Committee in May, and awaits Senate approval. Armstrong predicts that the bill will most likely be approved, but noted that the idea of a "big enemy" is not really selling. He cited a recent Pew poll showing that no more than 1/3 of EU nationals consider Russia to be a threat to anything.

​As for the Moscow's reaction to such moves, Armstrong said that Russia doesn't want war and, along with China, is playing an "intelligent" hand.

NASA
No Secrets: Russia to Publish Catalog Disclosing US Military Satellites
"[Russia] is playing a much more intelligent game than anybody in the West," he said. "The problem is managing the downfall of the American empire. 20 to 30 years from now, when China, Russia, Iran, India are much more important than they are today, and the US is definitely declining, the trick is, how do you get to there, from here, without blowing everything up? The last days of a declining empire are always very dangerous."

The analyst shared his thoughts on America's next president.

"We've got to get through the next 25-30 years without the US blowing the […] out of all of us, so what I would like to have for the next four years is a president good at negotiating. What we've had until now is, ‘do what we want or we bomb you.'"

The Looming US War on Russia

US Tech Company Fined $14Mln for Paying Bribes in Russia, Five Other States