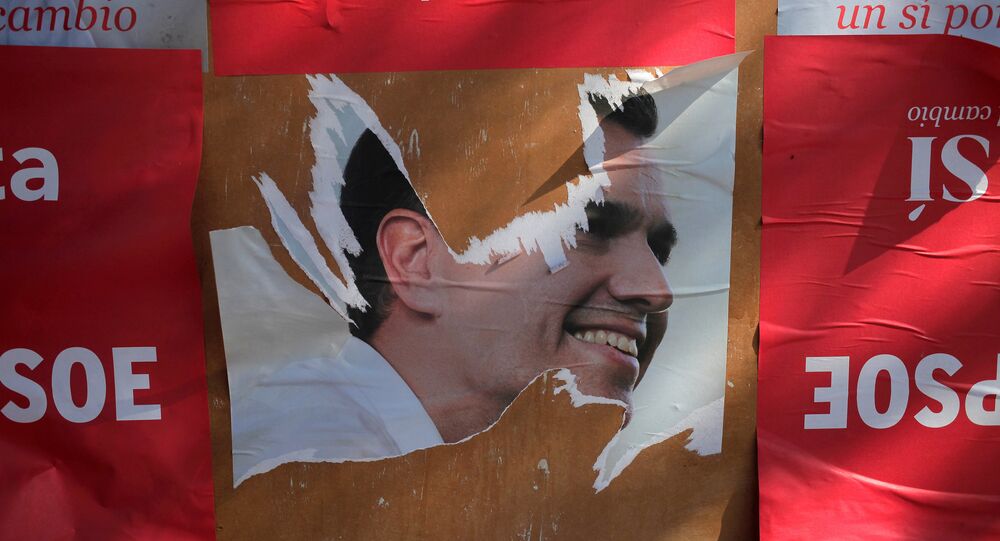 Spain will go to the polls this Sunday, for the country's second election in just 6 months, but with polls predicting a very similar result to December's election, the political stalemate may well continue.

The historic election in December brought about a parliamentary deadlock as no party won a clear majority, and incumbent Prime Minister, Mariano Rajoy, failed to secure an investiture vote. For the first time in Spanish democratic history Article 99.5 of the Spanish Constitution was implemented, and a second election will take place on Sunday (26th June).

While polls suggest that a coalition between the Socialist Workers Party (PSOE) and the anti-austerity alliance Unidos Podemos ("United We Can") could gain enough seats to form a government, PSOE have ruled out any coalition with either the left of center alliance or the incumbent Prime Minister's conservative People's Party (PP).

Interesting to see coalition building language being so central to Spanish politics nowadays. Clear example of fragmentation of pub. opinion

Colin Fox, national co-spokesperson for the Scottish Socialist Party, was invited by Podemos to join them for the campaign.

"Since December Podemos have formed an alliance with the regional independence supporting parties, the Spanish Green Party, Equos, and the Communist party, building a strong alliance. They have the momentum behind them. They're now the left wing force in Spain running as Unidos Podemos," Fox told Sputnik.

But even with a new alliance, polls show that Sunday's results may still fail to deliver a majority party, meaning that for the first time in Spanish democratic history a coalition government will have to be formed.

"The big question is, do PSOE, who can't form a government themselves, support Rajoy, go into coalition with their natural enemy, or, do they bite the bullet — and even though they hate Podemos? They hate the new left wingers and that they've lost the mantle of the left — do they find common ground to work from."

Podemos is doing quite well in the polls. Elections are sunday. They could have a left coalition. https://t.co/qr63vFLYsA

Yet it is likely that with just 20% of the popular vote PSOE will be the "King makers" in this election, as Fox suggests, since a government will only be formed if they lend their support to either the new alliance Unidos Podemos or the conservative PP.

"PSEO have 20% and are now largely a regional party in Andalucía and Extremadura in the south, they have that bedrock regional vote, but there is no stomach for a 3rd election. Sunday may result in the same situation [as December], but if PSOE don't form a coalition they'll get hammered by their support. It puts more pressure on the politicians to reach an agreement."

Hard to believe it's a Spanish general election on Sunday. Not a single poster or propaganda anywhere. #chilled

PSOE's Pedro Sánchez says he will not form an alliance with PP or Podemos, but Colin believes that this is largely pre-election rhetoricand that in order to avoid a 3rd election current PSOE leader may stand down.

"There's no chance of Sanchez becoming a prime minister. What may well happen is PSOE might not even get to 20%, they might then say Sanchez cannot be the person that does the negotiations, so they'll dump him and bring in a new personality who has credibility, who says 'let's be pragmatic'. They could put Rajoy back in power, but that's like Labour putting the Tories back in power in the UK. The lesser of the two difficulties is they get someone new who says 'we don't like it but it's the lesser of two evils, we have no future if we put the PP in power, let's put Podemos in power. We don't like them but we will see whether we are right or wrong'."