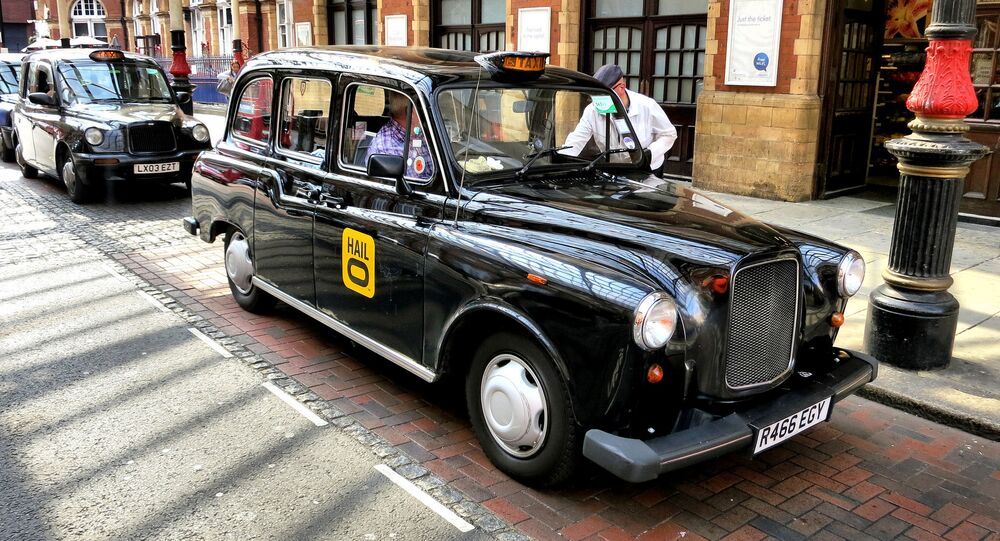 Norman Lewin is not your ordinary London taxi driver. In his quest for an informed decision on the EU referendum vote he has attended over half a dozen highbrow events, where MPs, ministers and bankers slugged it out whether to Remain or Leave. He then discusses his findings with passengers in the back of his taxi.

Sputnik spoke to Lewin, putting the spin of both camps to the "cabbie test".

"The consensus seems to be that people understand Brexit to mean that we'll take control of our borders, get back powers to this country which we've lost largely, keep a load of money which we give to the European Union — and that we'll be self-sufficient. And this is being completely dismissed by the Remain camp. This is a problem," Lewin told Sputnik.

"People in the back of my taxi do believe that immigration is a number one issue because of the demographic of London, which is where I drive around, has changed dramatically."

© AFP 2020 / Ben Stansall
Leaflets delivered recently to British households, relating to the forthcoming European Union (EU) referendum, are arranged for a photograph in London on May 31, 2016.

"Also, they made a big effort — they learned English, they employed locals, and they grew their business and so gave back something to the nation — and paid their taxes. What's happening now is there are ghettos, cause I drive around and I see ghettos of people. So immigration in the back of my cab is number one."

"But when you drive in the City of London where all the banks and financial institutions are — whenever they come into my cab and I ask them what they think they say they want to remain. So obviously, there is self-interest there."

What about the 'man in the street'?

"If they can afford a taxi, cause it is expensive, they've got a different view. They think it's a failed experiment and they weren't consulted about any of these major changes that are happening to them on the street where they live and in their jobs, and in their doctor surgeries and in their schools. This is what they talk about."

"In the interest of their own children, they think Brexit is the answer."

"I still believe that we are good enough, strong enough. I think we are the fifth most powerful nation in the world. I think people in other countries will be shocked about the fact we've made a decision but they will respect the democracy, I am sure, and they will still want to do business with us."

"The French will still want to sell us their cheese, the Germans will still sell their BMWs. The Poles will be a bit upset because a lot of Poles are over in this country, and there may be a problem with that."

"I think we'll be able to renegotiate our position in Europe. It's all about compromising in Brussels anyway — that's how negotiation is done and I think we'd able to do it."

Lewin's only concern is whether the UK has good civil servants to negotiate the deals with the EU on behalf of Brits.

"According to the ex-commissioners group I've been lucky enough to listen to on one of the panels — they believe there is going to be a huge problem coming down the line cause we won't have the expertise on the table due to the cuts in Whitehall, government departments being slimmed down, (George Osborne's idea of slimming down the state).

"It means less qualified people will be negotiating on our behalf. They were telling the audience that the French are very, very good at it; they have crème de la crème civil servants for negotiating."

"But I believe we're good as well, we are well prepared. But they believe there'd be a deficiency to such a degree that there won't be enough experts to negotiate on our behalf."

© REUTERS / Hannibal Hanschke
No Brexit: UK Is a 'Force for Good' in the EU - Legal Expert

What do you think of Lord Howell's warning that the Parliament doesn't actually have to bring Britain out of the EU if the public votes for it? Isn't a referendum supposed to be the will of the people?

Lewin: "That's right! I am old enough to remember the previous referendum in 1975 but I wasn't old enough to vote in that one. But a referendum is very much like an election in this country and across Europe — the people have spoken.  I think that will have to be honored."

"People in this country will be horrified if they do vote for something and they can't have it because of this idea of parliamentary ping pong. I fail to see how other nations are not going to accept the will of the British people. If they won't — they will be going against democracy and democracy is supposed to be the essence of the European Union."

Are there any particular arguments for and against Brexit mentioned by your passengers that really struck you?

"I think the economic argument to remain is very, very strong. The whole implication of being in a group; and certainly the bankers know how to talk about money — and they mystify me.  They talk a lot about technicalities of the whole thing."

"But the other side of it — it's just what I have already said about immigration. The passengers also talk about the fact that this is the first time they have a say in it. A lot of people, like my generation, never had a vote in it.  And we've seen what's been going on with the European Union, particularly with the migrant crisis, which is massive, absolutely massive.

"The EU have found difficult to deal with it [migration crisis] initially, they've actually washed their hands off it, they had no idea what to do. And even now it seems a little bit precarious with this deal of "one in one out" with Turkey. People see this."

"Also, I am interested in steel in this country. And when steel works closed down in the north of England I was expecting the European Union to come in and say 'we've got a plan, there's a nation in trouble with a major strategic manufacturing issue — let's deal with it'. Nothing, absolutely nothing! China is dumping steel and that's too much."

"The European Union — if it's ever called on something, they should do something about the migrant thing and the steel thing. And they won't."