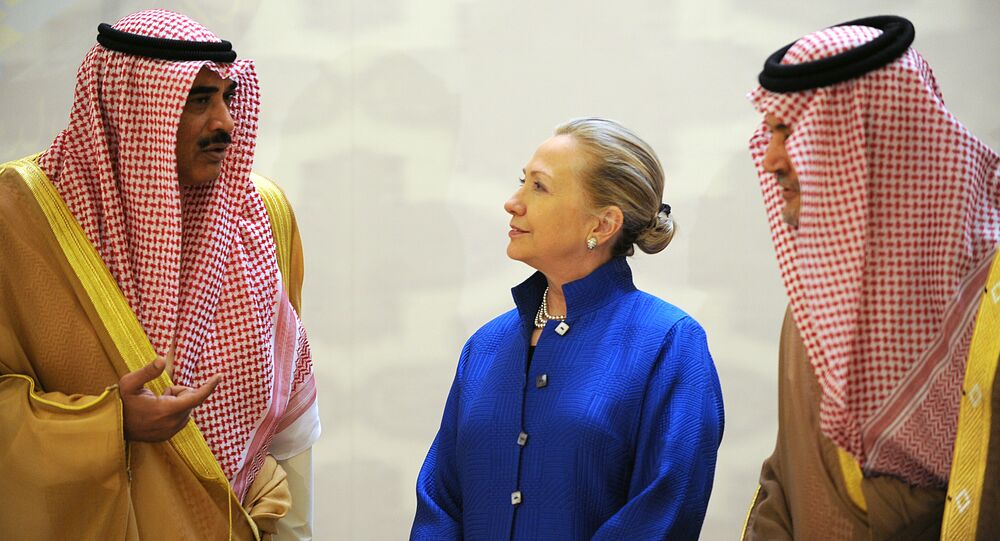 A news report by the Jordanian Petra News Agency suggested that Saudi Arabia has paid more than 20 percent of the cost of Hillary Clinton’s presidential campaign, quoting Saudi Deputy Crown Prince Mohammed bin Salman; however the latest statement of the agency claims its website was hacked when this story appeared.

© AFP 2020 / CHRIS KLEPONIS
Hurry Up and Wait: State Department Won’t Release Clinton TPP Emails Until After Election
On Sunday, a report on the Petra News Agency website, including what were described as exclusive comments from Saudi Deputy Crown Prince Mohammed bin Salman, suggested that the Kingdom has paid more than 20 percent of the cost of Hillary Clinton’s presidential campaign.

According to the Middle East Eye news website, the report was later deleted from the agency’s website.

However, a snapshot of the original Arabic version was later republished by the Washington-based Institute for Gulf Affairs.

“Saudi Arabia has always sponsored both Republican and Democratic Parties of America and… the kingdom also provides with full enthusiasm 20 percent of the cost of Hillary Clinton’s campaign in the US presidential elections despite the fact that some influential forces within the country don’t have a positive look toward supporting the candidate because she is a woman,” the agency’s report quoted Prince Mohammed as saying.

The article explained that it is illegal in the US for presidential candidates to accept funding from foreign governments, but “Saudi Arabia and Clinton are no strangers to exchanging favors.”

The Clinton Foundation, which is chaired by both Hillary and her husband Bill Clinton, disclosed in 2008 that it had accepted up to US$25 million from the Saudi Kingdom in the same year.

Other foreign governments who have reportedly donated money to the Clintons include Norway, Kuwait, Qatar, Brunei, Oman, Italy and Jamaica, which together donated around US$20 million.

However later this week the Middle East Eye reported that “Jordan's official news agency said on Tuesday that it was hacked when, over the weekend, a story briefly appeared on its website.”

© Flickr / Wikileaks Mobile Informatio
WikiLeaks Intends to Publish More Hillary Clinton Emails - Assange
“In response to what has been published by some media outlets as well as the social media regarding news that were attributed to Jordan News Agency (Petra), we would like to clarify the following: 1) A technical failure on Petra’s website occurred for a few minutes on Sunday evening, June 12, 2016. Protection systems at the agency as well as the technical department noticed that and therefore, they suspended the transmission system and the electronic site and moved to the alternative website,” says a statement on the news agency website.

“Later, it became clear that the technical failure that occurred was an attempt to hack the agency’s transmission system and its website,” it further explains.

“The Agency was surprised to see some media outlets as well as the social media publishing false news that were attributed to Petra. They said that Petra transmitted a news item related to the deputy crown prince of Saudi Arabia and later deleted this news item. This is totally false and untrue.”

German newspaper Deutsche Wirtschafts Nachrichten even suggested that it might be the cause for “Russia’s massive efforts against Clinton.”

The outlet suggested that in Syria, Russia is fighting against Daesh, while the Saudis actively support the jihadists.

The newspaper noted that Mohamed bin Salman and former President Bill Clinton met in Washington in September of 2015 at the Four Seasons’ hotel weeks before he signed a lucrative lobbying deal with one of Hillary Clinton’s closest aids, John and Tony Podesta.

The Podesta Group headed by Hillary Clinton major fundraiser Tony Podesta has scheduled Bin Salman’s program which included visiting Google and the US Chamber of Commerce in addition to leading military industry CEO’s during his recent trip to the US.

And even though the trueness of the recent report was later refuted, it would be only true to suggest that there is no smoke without fire.