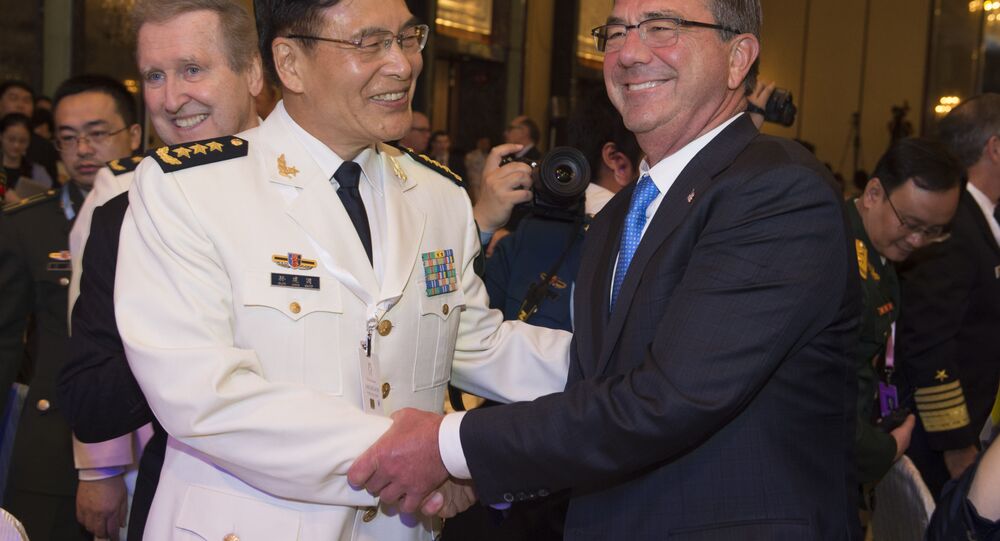 Washington is seemingly playing down its belligerent rhetoric toward Beijing ahead of the leadership transition in the US and China.

The 15th Shangri-la Dialogue defense summit that brought together over 600 delegates from 51 countries became a particular challenge to US Defense Secretary Ashton Carter.

"The challenge for US Defense Secretary Ashton Carter at the 15th Shangri-la Dialogue (SLD) this year was to deliver an address sufficiently convincing on the US security commitment to the region that it would reassure Washington's allies and partners, without appearing unduly to raise the temperature of relations with China," Dr. Euan Graham, Director of the International Security Program at the Lowy Institute, notes in his article for The Interpreter.

Carter is well known for his belligerent stance toward China's activities in the South China Sea.

© AFP 2020 / Mandy CHENG
Beijing Strikes Back at Kerry's Accusations Over Air Defense Zone in S China Sea
In his speech delivered at the US Naval Academy Commencement only a few days before the Singapore summit, Carter once again stressed the importance of the Asia-Pacific region for the US and didn't miss a chance to lambast China for what he called "expansive and unprecedented actions in the South China Sea."

However, despite growing tensions between Washington and Beijing, "Carter's pitch in Singapore was loftier and more rhetorical, identifying 'commitment, strength and inclusion' as core precepts for the US approach to the region," Graham underscores.

"The key messages are that US influence is benign, its core interests widely are shared in the region, and its networking power is a force for deepening cooperation — bilateral, trilateral, and multilateral," the academic continues.

Graham points out that in what may be his last address to the Singapore-hosted security gathering Carter "notably did not call out" Beijing's "behavior" in specific terms.

"Nor was there any repeat call this year to reverse course on island-building and militarization. This left some delegates wondering if the US was in fact backing down," the academic stresses.

© Sputnik / Vitaliy Ankov
Ash Carter: US Hopes Russia Will Contribute More to Asia-Pacific Security
But that is not all: Admiral Harry Harris of US Pacific Command was remarkably silent during the summit. It should be noted that Harris is yet another advocate of a muscular US response to China's island-building.

"Even Senator John McCain delivered his speech at a separate location in Singapore, inter alia giving his blessing for TPP ratification but disappointing many in the region by failing to mention the UN Convention on the Law of the Sea as part of the 'rules-based order'," Graham notes.

According to the academic, the reason behind the US delegation's relatively pacific stance is that high-level US-China economic and security talks were taking place nearly simultaneously in Beijing.

It would be wrong, however, to assume that the US is about to drastically change its Asia pivot policy.

During the summit Carter repeated his rhetorical assertion that Beijing's actions in the South China Sea "could end up erecting a Great Wall of self-isolation" triggering a backlash from the Chinese delegation headed by Admiral Sun Jianguo a day later.

It seems that by such an unnecessarily tough approach toward China Washington is shooting itself in the foot.

© Flickr / Defence Images
Building Trust: India Mulls Granting Long Denied Shore Leave to Chinese Mariners
Thus, unsurprisingly, during the latest high-level economic and security talks in Beijing the US and China made a little if any progress.

"The timing of the meetings, combined with tensions over the South China Sea — where the US is challenging Beijing's assertion of sovereignty over islands, reefs and surrounding waters claimed by other countries — limited prospects for breakthroughs on issues such as trade and investment barriers and China's currency policy," Felicia Schwartz and Mark Magnier of the Wall Street Journal emphasize.

Both this year's Shangri-la Dialogue summit and the Strategic and Economic Dialogue in Beijing are the last for the Obama administration.

At the same time China will face its own important leadership transition in 2017, when five of the seven members of the Politburo Standing Committee — China's top decision-making body — are expected to step down.

In light of this it is unlikely that the relationship between the two countries will undergo serious changes in the near future.

Carter Pushes for ‘Principled Security Network’ for Asia Against Russia