Russia has agreed to the OSCE decision on giving the Organization's observers in eastern Ukraine the right to carry personal arms. This decision demonstrates peaceful intentions of Moscow and its readiness for a compromise, Deutsche Wirtschafts Nachrichten reported. 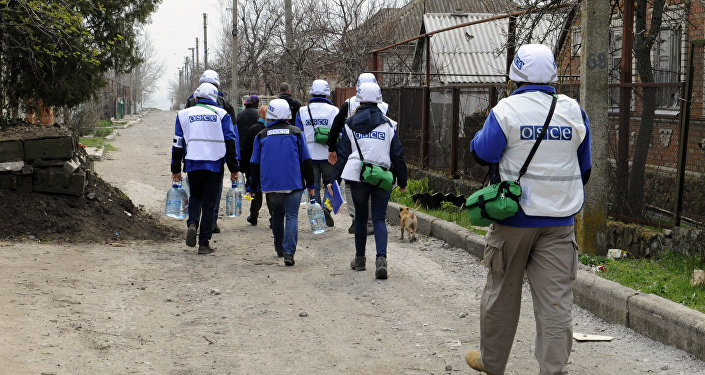 © AFP 2019 / ALEXANDER GAYUK
Russia Open to Having OSCE Monitors Carry Personal Arms
Russia agreed to the fact that the representatives of the OSCE mission in the eastern regions of Ukraine will be allowed to carry personal weapons.

"In contrast to Kiev, Moscow is now making obvious efforts to resolve the situation in Donbass," the newspaper wrote.

In the future, observers will be able to carry "guns for self-defense," Russian Foreign Minister Sergei Lavrov said.

This decision demonstrates "that the Russians do not plan to conduct any military operations" in the region, the article stated.

Prior to this, OSCE staff, watching the fragile truce between Donbass militias and the Ukrainian government forces, was not allowed to possess any weapons, the newspaper recalls.

Earlier, the head of the organization Lamberto Zannier also expressed his willingness to send an armed contingent of the OSCE to Ukraine if both sides give their consent. Kiev had repeatedly called for the deployment of additional military on its territory, and Moscow is ready to look for a compromise, Austrian newspaper Die Presse wrote.

"The Kremlin's demonstrating willingness to compromise regarding the deployment of armed OSCE observers," the newspaper wrote.

© Photo : OSCE/Mikhail Evstafiev
OSCE Foreign Ministers Adopt Russia-Initiated Counter-Terrorism Declaration
Additional observers could be deployed in the areas where there is the most intense fighting between the Ukrainian army and Donbass forces, Russian Foreign Minister Sergei Lavrov said earlier in a television interview. The new observers may also be given the right to carry personal arms.

The OSCE observation mission has been deployed in Ukraine and tasked with monitoring the implementation of the Minsk deal provisions on settling the conflict between Kiev and the pro-independence militias in the country's southeast.