The resignation of the Saudi-backed High Negotiations Committee's chief Mohammad Alloush is likely to open the window of opportunity for negotiations over Syria; the move apparently indicates Riyadh's desire to stay relevant in the Syrian peace process.

There are signs showing that Saudi Arabia want to stay relevant in the Syrian peace process; it is especially remarkable given Riyadh's previous reluctance to join the negotiating table.

"While the war is still raging in Syria, the other ‘war' being fought among the diplomats in Vienna and elsewhere seems to have produced some significant results that may just turn out to be the important turning point all the actors, state and non-state, involved in it have been looking for. We are talking about the 'walk out' of Jaysh (Jaish) al-Islam's Mohammed Alloush from the High Negotiations Committee (HNC)," Salman Rafi Sheikh, research-analyst of International Relations and Pakistan's foreign and domestic affairs, writes in his recent article for New Eastern Outlook.

© Flickr / poter.simon
Russian Combat Jets Crush Daesh-Controlled Oil Facilities Outside Syria's Raqqa
According to the analyst the resignation of the Jaish al-Islam head is by no means a coincidence.

Indeed, on May 30 Al Jazeera reported that the chief peace negotiator of the Saudi-backed opposition bloc resigned.

"The chief peace negotiator of Syria's main opposition bloc said on Sunday that he was resigning over the failure of the UN-backed Geneva peace talks to bring a political settlement to the Syria crisis," the media outlet wrote.

According to Sheikh, Alloush did not resign but was "ousted" by his powerful "mentors." The analyst has drawn attention to the fact that Jaish al-Islam has always been a Saudi marionette. Unsurprisingly, the group's leader was appointed as the chief negotiator for the Saudi-formed HNC.

Alloush is known for his "tough" stance toward Syrian legitimate President Bashar al-Assad. The opposition "chief peace negotiator" went even so far as to call for "killing" the Syrian leader, Sheikh remarks, citing the head of the Syrian government delegation, Bashar Jaafari.

"It was already a well-known fact that the presence the leader of Jaysh al-Islam had, since the beginning, been one of the major sticking points in the indirect talks between the opposition and the government in Syria," the analyst underscores.

If it was the House of Saud who "ousted" erratic Alloush, what was Riyadh's message? 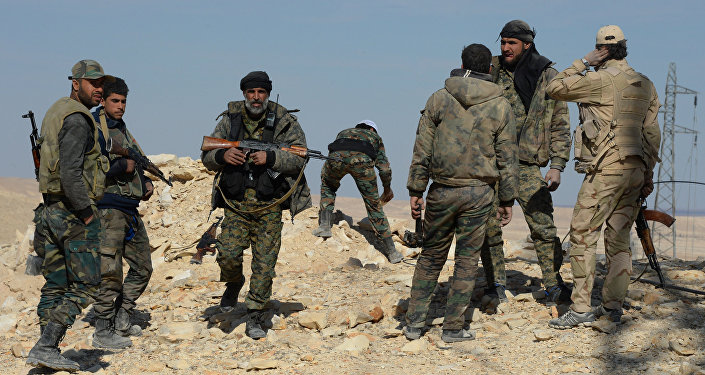 © Sputnik / Mikhail Voskresenskiy
Perfect Timing: Why Syrian Army Joined 'Race' to Liberate Raqqa
According to Sheikh, the move "seems to be aimed at 'convincing' the US and Russia of the need to protect Saudi interests when it comes to drafting and putting the probable constitution of Syria to popular referendum."

"The 'ouster' of such funded-hardliners does indicate that the Saudis are moving cautiously as far as their attempts at re-defining their relations with Russia are concerned," he adds.

Saudi Arabia has apparently changed its mind and now wants to remain relevant as an influential party of the Syrian negotiations.

Remarkably, Russian presidential envoy for the Middle East Mikhail Bogdanov characterized Alloush's resignation as a step in the right direction.

"It will have a positive influence on progress in the intra-Syrian talks," Bogdanov stressed adding that Alloush and his counterparts were taking an "absolutely unconstructive approach toward the peace talks."

It remained largely neglected that ahead of Alloush's resignation the foreign ministers of Arab Gulf countries held talks with Russia on military cooperation.

"We have discussed the aspects of strengthening our cooperation in the areas of education, energy and military," Saudi Foreign Minister Adel al-Jubeir told journalists on May 26.

"To be sure, what we have got here is a nascent Russian-Saudi congruence over Syria peace talks. These are early days but the Saudi Arabia may no longer be rejecting the peace process out of hand. The 'ouster' indicates Saudi intentions quite clearly. We shall have an even clearer picture as soon as his replacement is announced," Sheikh stresses.

Russian MoD on Alleged Strike on Deir ez-Zor: Another Round of Rumors