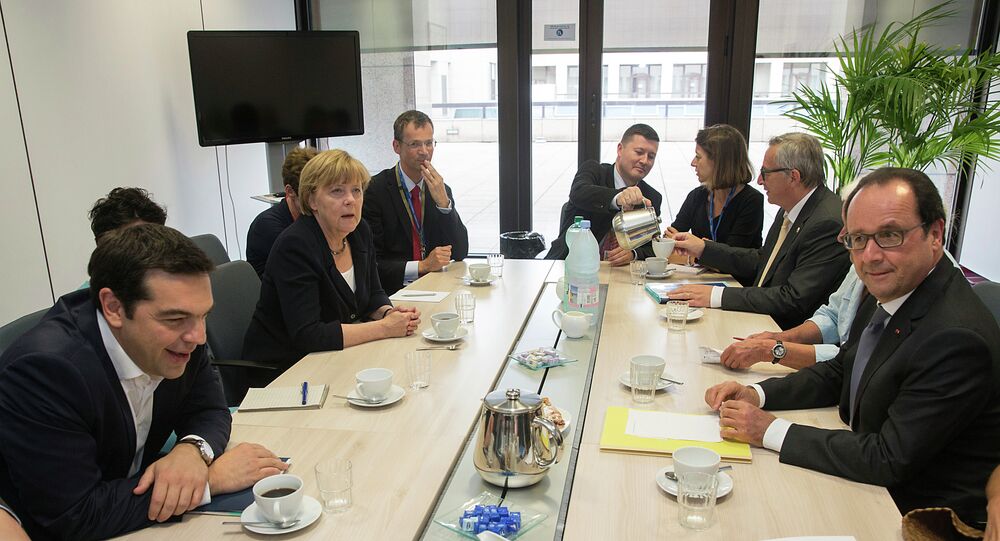 None of the EU country members will take the responsibility for breaching European unity and come out against anti-Russian sanctions, Le Monde reported. At the same time, Brussels may consider an option to give concessions towards Moscow.

The "necessity of European unity, even if it is only a façade, and the EU’s unwillingness to concede to Russian President Vladimir Putin" are the main reasons for anti-Russian sanctions to be extended for another six months, an article in the French newspaper Le Monde read.

Whatever differences are between EU country members, the "only thing that matters is the unity of the 28 nations and no one would take responsibility to breach it," a high-ranking European diplomat told the newspaper.

© AP Photo / Gero Breloer
What's Behind Germany's Growing Calls for Easing Sanctions on Russia?
At the same time, discontent over anti-Russian sanctions is mounting across Europe. Greece, Hungary and Italy have repeatedly opposed the European policies towards Russia. At the same time, Eastern and Northern European countries have advocated a firm stance towards Moscow. Other EU members have said that "Putin did nothing to help the EU help him."

In 2014, relations between Moscow and Brussels soured due to the situation in Ukraine, after Crimea decided by public vote to secede from Kiev and rejoin Russia. After Brussels imposed several rounds of sanctions against Russia, Moscow struck back, banning food exports from the countries that backed anti-Russian policy.

In order to settle Europe’s internal difficulties and not to fuel tensions with Russia, the existing sanctions should be "dressed up," the article read.

This time, the decision on sanctions will not be made on a "technical diplomatic level" but will be discussed by national leaders of the bloc.

However, this is not the only concession Brussels is ready to make to those who oppose the sanctions, according to the author.

First, the EU is considering prolonging the sanctions for only three months, instead of six. Second, the sanctions may be prolonged for six months, but with the possibility of gradual removal. Such proposals would also send a signal to Kiev that they are not making progress settling the Ukrainian crisis.

© Sputnik / Vladimir Rodionov
Greece Against Automatic Extensions of Anti-Russian Sanctions
These concessions may be tied to organizing local elections in the breakaway Ukrainian region of Donbass, the article read. The self-proclaimed Donbass republics have opposed Kiev’s demands that Ukrainian parties take part in elections and refugees can vote.

The EU is interested in the lifting of anti-Russian sanctions if the Minsk agreement is implemented, EU Ambassador to Russia Vygaudas Usackas said recently.

"We want to lift the sanctions entirely, when the Minsk agreements will be fulfilled. But I'd rather not talk about the details here, in Kaliningrad, when we are not talking about sanctions, but about how to maintain and promote the cooperation and those projects, which have a good example," Usackas told journalists.

© Flickr / European People's Party
Juncker's Visit to Russia Shows Shift in EU Stance on Relations With Moscow – German Lawmaker
What is more, some countries, such as Lithuania, are against easing sanctions against Russia. They insist that the restoration of normal relations with Moscow would be dangerous, the article read.

There are also concerns that Brussels would finally push Kiev to hold Donbass elections in any form. The upcoming visit of President of the European Commission Jean-Claude Juncker to Russia is considered a signal that Europe does not want to cut off ties with Moscow, the article read.