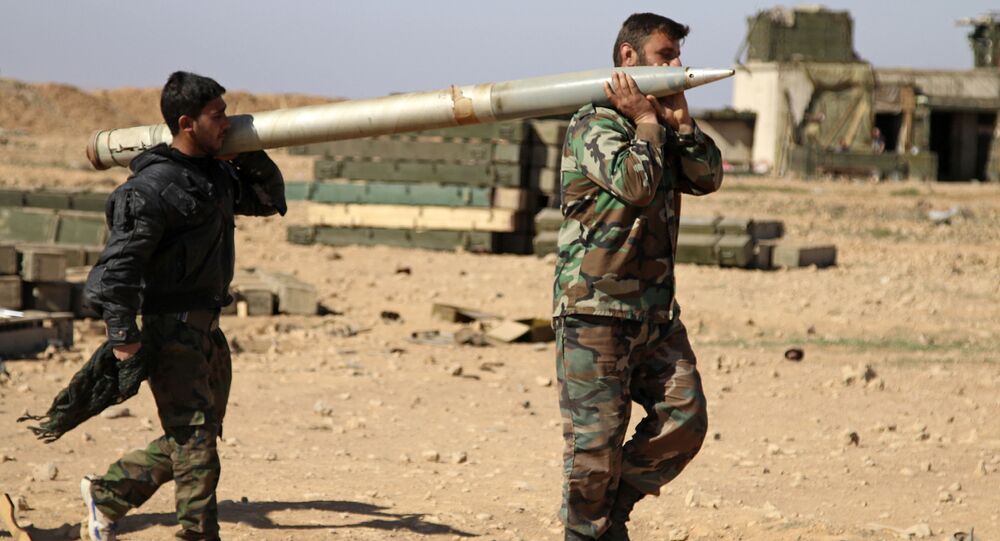 The Syrian Arab Army (SAA), assisted by Russian warplanes and its local allies, will free the city of Raqqa, which Daesh turned into the capital of its terror caliphate, political analyst Catherine Shakdam told Radio Sputnik, pointing to the liberation of Palmyra as the moment when the tide of war changed in Damascus' favor.

The SAA and the Desert Hawks, Syria's special forces, are reported to be only 11 miles away from the al-Tabqa city, home to a major dam and a key military airbase, captured by Daesh in August 2014. The city is located some 34 miles southwest of Raqqa and the SAA is moving towards the embattled stronghold, a Syrian brigadier general told Sputnik.

It all started with Palmyra

This offensive would not be taking place if Russia had not offered its military assistance to Damascus in September 2015. In late March, Palmyra, home to the priceless ancient ruins that Daesh partially destroyed in the ten months it controlled the city, was liberated by Syrian forces.

"Psychologically, Palmyra was immense. You see the result today. You have seen it in Aleppo and now in Raqqa. [Damascus-led forces] are going to clear this province. The de facto capital of Daesh will be retaken and reclaimed by the Syrian Army," the director of programs for the Shafaqna Institute for Middle Eastern Studies asserted.

Shakdam even provided a rough estimate of when this victory could take place.

The SAA could make major gains in Raqqa "maybe by the end of Ramadan." The Muslim holy month will end in early July. By fall Syria "could see massive change" with regard to Daesh. The group "could literally be on the run" or disappear altogether.

Daesh is 'literally on the run'

© Sputnik / Mikhail Voskresenskiy
Perfect Timing: Why Syrian Army Joined 'Race' to Liberate Raqqa
This process is already underway. In fact, the radical group that still controls some parts of Syria and Iraq has been retreating for more than a year.

"I think that Daesh militants are really on the run. The areas they control" have shrank "quite rapidly and the Syrian Army has really consolidated with the help of the Russians, Iran and Hezbollah, of course. It is gaining and reclaiming territory," the analyst noted.

Daesh, in her view, has become a shadow of its former self.

"You have now a suffocated terror group which has been reduced from an army" and a government-like organization to a "rat pack militia group," Shakdam observed. This comes in sharp contrast to how powerful the terrorist group was a year or two ago when it launched a blitz offensive on Iraq, capturing a third of its territories.

This success, she added, could partially be attributed to the fact that the Syrian Arab Army "has managed to cut off all aid to Daesh militants coming from Turkey." In fact, Daesh and other radical groups have been able to regroup and resupply precisely because the border region was not secured.

The latest reports from the Russian Centre for reconciliation of opposing sides in the Syrian Arab Republic show that al-Nusra Front militants still cross the border to transport recruits, weapons and supplies to the battlefield. On Friday, as many as 200 al-Nusra Front fighters crossed into Syria from Turkey near Beisun and launched an attack on the government forces.

Daesh and other radical groups, who have tried to overthrow Bashar al-Assad, would have been destroyed sooner if they did not receive help from the outside. Countries like Turkey and Saudi Arabia have enabled terrorists, using them as a means to advance their own geopolitical agenda, the analyst pointed out.

"The problem is that we have had states like Turkey that have used terrorism as an asymmetrical weapon of war. They have tried to use it as a form of new imperialism," she said. "Turkey has tried to turn Syria into another province of the empire that Erdogan is trying to build."