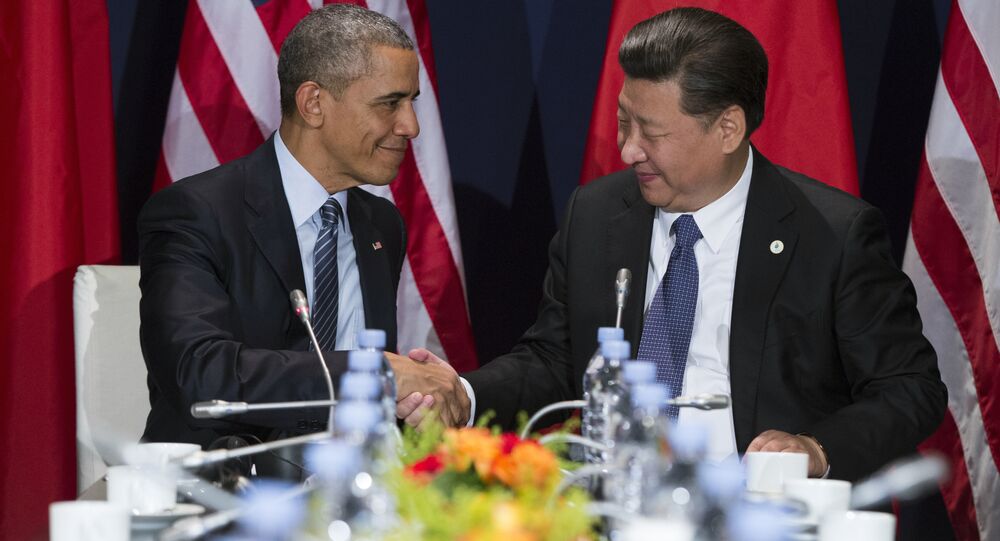 'Hopeless Quest': 3 Reasons Why US Cannot Contain China Even If It Wants to

Recent developments suggest that Washington wants to counter Beijing, instead of working together with the rising global power, but the Cold War standoff, as well as current economic and geostrategic factors suggest that containment is an unhealthy strategy to pursue and it is likely doomed to fail.

In the coming months, "more emphasis is likely to be placed on China as a serious strategic competitor, if not an outright adversary," Ted Galen Carpenter, a senior fellow in defense and foreign policy studies at the Cato Institute, warned. Washington's containment strategy, the analyst added, has already entered its second stage that he referred to as "the initial phase of activation."

If US policymakers don't want to add extra strain to the already tense relationship with Beijing, it is time to hit pause and reevaluate their strategy that has recently involved deepening ties with India and Vietnam, as well as engaging in controversial "freedom of navigation" operations in the South China Sea. None of those make Beijing happy.

First thing hardliners in Washington should keep in mind is that "reviving anything even faintly resembling the Cold War-era containment policy that worked against the Soviet Union is a hopeless quest." the analyst observed.

It's the economy, stupid

© REUTERS / Jonathan Ernst
Trump’s America Would Concede Its Power to Russia and China - Expert
Economic cooperation is the most important feature of the bilateral relations between the two leading global economies. Should any side decide to sever these ties, both will feel serious implications.

"China is America's second largest trading partner. In 2015, the United States exported $116 billion in goods to China while importing $482 billion. Disrupting that relationship would be extremely costly and painful for both countries," Ted Galen Carpenter explained.

On the contrary, America's economic relations with the Soviet Union were largely a non-issue. It follows then that Washington did not have to take the economic cooperation factor into account when formulating its strategy on Moscow following the WWII.

Containment is a multiplayer game

Just like in the Cold War days, Washington will need partners and allies to pull off a strategy aimed at countering China.

"Conducting a containment policy against the Soviet Union during the Cold War was feasible because (at least during the crucial formative stages) neither the United States nor its key allies had much of a political or economic relationship to lose with Moscow," the analyst observed.

This is not going to happen today. Most Asian nations, including close US allies Japan and South Korea, have extensive economic ties with Beijing. It is highly unlikely that some of them would want to jeopardize this to back Washington's attempts to counter China.

© Flickr / Official U.S. Air Force
Armed to the Teeth: US Plans to Turn Vietnam Into Bulwark Against China
Washington should also consider global challenges, like global warming or Pyongyang's nuclear ambitions, and China's role in addressing them. The Iranian nuclear deal or the Paris Agreement show that every stakeholder needs to contribute to the process for it to lead to a (hopefully) lasting agreement.

"It is nearly impossible, for example, to imagine progress being made on the difficult and complex issue of North Korea's nuclear and ballistic missile programs without China's extensive involvement," Ted Galen Carpenter noted.

Hawks in Washington, particularly in the US military and foreign policy establishment, should tone down their rhetoric when it comes to China. Otherwise, their strategy of trying to contain the dragon will likely cause undesired effects – particularly for the US.

"In attempting to preserve US primacy in East Asia and the western Pacific, US leaders are intruding into the South China Sea and other areas that logically matter far more to China than to America. Such a strategy is likely to result either in a humiliating US retreat under pressure or a disastrous military collision," the analyst warned.

De-Dollarization: Who Stands in the Way of Beijing's Own Crude Futures