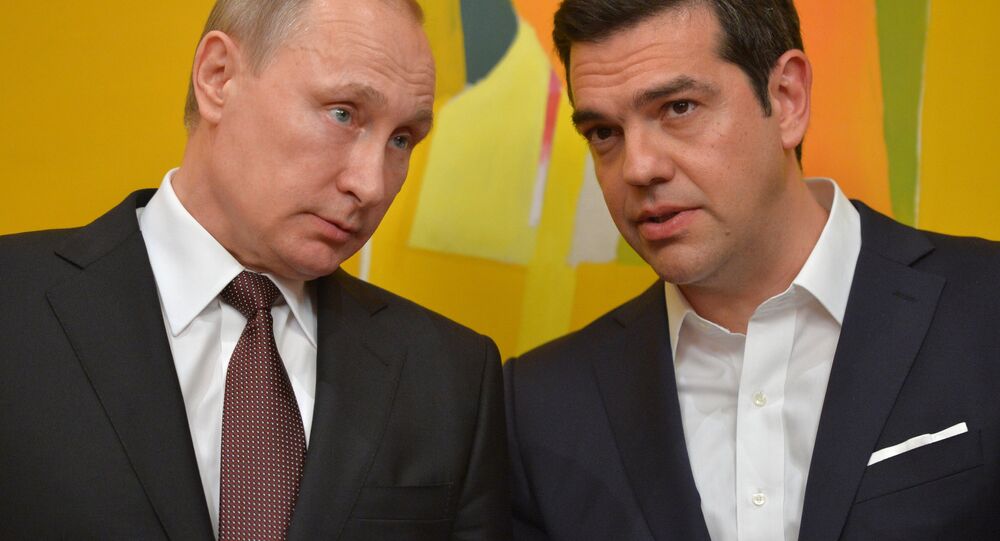 Greece has good relations with Russia and is ready to be a "bridge of friendship and cooperation" between Moscow and the EU. However, due to growing financial difficulties Athens is unlikely to oppose Brussels on prolonging anti-Russian sanctions, Le Figaro reported.

In June, Brussels is expected to decide on prolonging sanctions against Russia. At the same time, Moscow may extend its food embargo for 2017. The last measure would deal a blow to the European farming industry, an article in the French newspaper Le Figaro read.

Italy and Hungary have already expressed their unwillingness to extend the sanctions. German Foreign Minister Frank-Walter Steinmeier admitted that this time it would be more difficult to make a unanimous decision on the issue. He added that the sanctions may be lifted step by step if progress was made on the Minsk agreements by late-June.

"As for sanctions, this is not our problem. We didn’t impose them. We took responsive measures. As soon as our partners are ready to lift the sanctions we will also remove our embargo," President Putin said.

Despite the fact that Greek Prime Minister Alexis Tsipras has good relations with Putin, Athens is dependent on European creditors and is unlikely to vote against the common EU stance on anti-Russian sanctions, the article read.

© REUTERS / Alkis Konstantinidis
Russia-EU War of Sanctions Hurts Moscow-Athens Cooperation - Greek PM
However, Tsipras criticized the "vicious circle of sanctions, militarization and rhetoric of the Cold War era" in the European Union. He also said that Greece could be a "bridge of friendship and cooperation" between Russia and the EU as well as between Russia and NATO.

In order to overcome the negative effect of sanctions, Russia offered Greece several joint projects. Moscow is interested in privatization of railway company TrainOSE and wants to buy stakes in Greek ports.

Another common point between Moscow and Athens is their relations with Turkey. The issues of military cooperation between Russia and Greece are important considering that Athens has the constant task of restraining Ankara, Russian Presidential Aide Yuri Ushakov said.

In Athens, President Putin said that there is information that Turkey wants to reconcile with Russia. Moscow is ready to resume cooperation but wants concrete steps from Ankara.

"We heard accusations from Turkish authorities, we did not hear apologies. And we did not hear of any readiness to compensate the loss. We hear statements on the willingness to resume [relations]. We also want to resume relations, we did not dismantle them. We have done everything over the decades to take Russian-Turkish relations to an unprecedented level of partnership and friendship. And this friendship between the Russian and Turkish peoples has, in fact, reached a very high level. We valued this greatly," Putin said at a press-conference in Athens.

© Sputnik / Igor Zarembo
Russia-Greece Black Sea Gas Pipeline May Transit Turkey or Bulgaria
Russia awaits concrete steps by the Turkish side, he added, noting that contacts are being maintained and that Ankara knows what Russia expects.

The main Russian-Greece project is a gas pipeline called Poseidon. After South Stream and alter Turkish Stream were cancelled the idea was to lay a pipeline under the Black Sea. The new pipeline may run across Bulgaria, to Greece and Italy.

However, there are reasonable concerns that the pipeline will not be built. Over the last 26 years, Greece has made three failed attempts to become an energy hub for Russia.

"We’re ready to consider any pipeline project, regardless of political environment. But we want preliminary guarantees," Putin said.