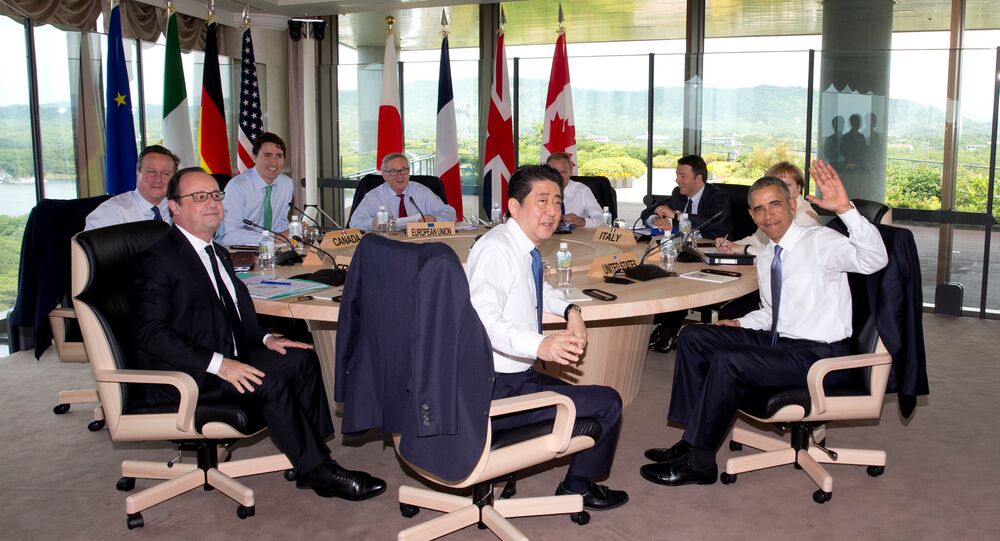 G7 Agrees to Extend Sanctions Against Russia in June

The G7 leaders have agreed to extend anti-Russia sanctions in June as Friday marked the second day of the group's summit in Ise-Shima, Japan.

“On Russia, the G7 has agreed on the vital importance of sanctions rollover in June. Ukraine is the victim of Russian-backed aggression. We must never forget that fact. And the G7 is clear that existing sanctions must remain in place until the Minsk agreement is fully implemented. I believe that is an important decision,” Cameron said at a press conference after the G7 Summit in Japan.

© REUTERS / Eugene Hoshiko/Pool
G7 Stands Pat on Anti-Russian Sanctions
Earlier in the day, the G7 leaders have stressed that sanctions against Russia will remain in place until full implementation of the Minsk peace agreement on Ukraine, pointing out, however, that maintaining constant dialogue with Russia is crucial to the peaceful resolution of the crisis.

"We stand united in our conviction that the conflict in Ukraine can only be solved by diplomatic means and in full respect for international law, especially the legal obligation to respect Ukraine’s sovereignty, territorial integrity and independence. We reiterate our condemnation of the illegal annexation of the Crimean peninsula by Russia and reaffirm our policy of its non-recognition and sanctions against those involved," the G7 leaders said.

© Flickr / European Parliament
Anti-Russian Sanctions to Be Lifted Only After Full Minsk Deal Implementation - Tusk
They stressed the importance of all sides adhering to the Minsk peace agreement on Ukraine.

"We recall that the duration of sanctions is clearly linked to Russia’s complete implementation of the Minsk agreements and respect for Ukraine’s sovereignty. Sanctions can be rolled back when Russia meets these commitments. However, we also stand ready to take further restrictive measures in order to increase cost on Russia should its actions so require," the G7 leaders stressed.

They pointed out, however, that maintaining dialogue with Russia is crucial to the resolution of the internal crisis in Ukraine.

© Sputnik / Vladimir Astapkovich
Russia Not to Discuss Conditions for Lifting Sanctions – Lavrov
A day before, Russian Foreign Minister Sergei Lavrov said that Russia has not and will not get into discussions on criteria for the lifting of sanctions.